The odds-makers have Sony pulling out a win in the latest console war.

The PlayStation 4 will outsell the Xbox One by 40 percent by 2019, according to industry-intelligence firm Strategy Analytics. The data company explains that Sony is “on a path to reproduce the success of the PlayStation 2.” Sony has already sold 18.5 million PS4s through the system’s first 14 months. By 2019, Strategy Analytics predicts Sony will have sold 80 million PS4s — though another researcher says that this isn’t the most important piece of data here. That is well ahead of its prediction of 57 million Xbox Ones by that same year. Console gaming is an industry that is worth more than $30 billion worldwide, and Sony is on track to capture the biggest piece of that. 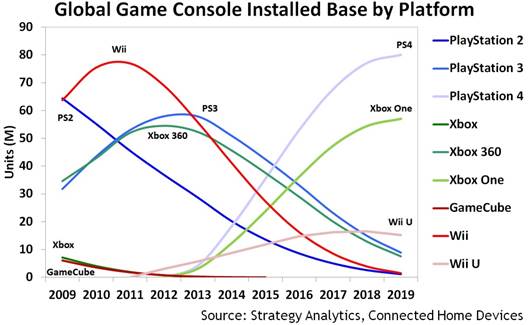 “Strong Year One shipments and a quickly growing installed base for PS4 and Xbox One are proving that game consoles are still an essential part of the ecosystem,” Strategy Analytics digital media strategies service director Michael Goodman said.

The researcher explains that new delivery methods for high-end gaming, like cloud streaming, probably won’t take away from traditional consoles. Instead, Goodman sees a situation where that kind of service will add value to the existing boxes — like with PlayStation Now on the PS4.

“Despite reports to the contrary, the game console market is not dead,” said Smith. “Core gamers have moved faster to this current generation than in any previous generation. The main difference in this generation is that casual gamers who bought a Wii are remaining largely on the side lines as free-to-play casual games and mid-core games on tablets and smartphones have captured this segment of consumers.”

While the casual crowd has abandoned this boxes, Strategy Analytics sees both the Xbox One and PS4 achieving success at least equal to (and probably greater for the PS4) than their immediate predecessors, the Xbox 360 and PlayStation 3.

The Wii U, however, is suffering the hardest from the abandonment of casual gamers. By 2019, Strategy Analytics does not believe Nintendo’s system will have even sold more than 20 million units. It has only sold around 9 million so far, and the Wii U is unlikely to see a significant jump in sales in the future.

“Personally, I am not convinced that PS4 will continue its lead over Xbox One,” Warman told GamesBeat. “I believe the Xbox 360 had and has a stronger offering for people who are not ready yet to migrate to Xbox One.”

Instead, Warman thinks each console will reach lifetime unit sales of around 80 million — but he also notes that this isn’t even the most important thing to measure when it comes to consoles.

“Unit sales is a deceptive metric,” said Warman. “The average gamer-per console is 1.77 for Xbox 360 and Xbox One combined and it is 1.73 for PS3 and PS4 combined in the U.S. As consoles mature in terms of businesss models and openness for consumers and developers, it becomes increasingly important to know who and how many consumers you entertain, each with their own account and wallet. Metrics such as monthly active gamers, daily active gamers, conversion rate and lifetime value will become commonplace for console developers and publishers.”

He thinks the first console manufacturer to fully embrace the openness of a platform like PC or mobile will “jump ahead.”

“Unit sales analysis is interesting because it involves a lot of money but from a forward looking market-trend perspective — or even a consumer perspective — it tells close to nothing,” said Warman.