Sony is about to jump in with the third major high-end VR headset, and its device is both better and worse than the other virtual reality hardware devices.

PlayStation VR will debut October 13 for $500, and the new device will have to carve out its own space in the gaming market against competitors like the PC-based headsets HTC Vive and Oculus Rift. After some time with PSVR, I can spot a number of reasons why it could delight and disappoint fans — especially when you compare it to the other options for head-mounted displays. And I’m going to do exactly that.

I’m going to go over how PSVR fails to live up to the Vive and Rift in another story, but here I’m going to explain what it does better than its counterparts.

How PSVR is better than Vive and Rift

Sony’s engineers have really wiped the floor with HTC and Oculus when it comes to ergonomics. This makes some sense considering Sony has decades of experience making consumer products. The PSVR already feels like it is the next generation of hardware when it comes to how you wear it.

The PSVR’s comfort is due to a few key design elements. The biggest feature is the crown that wraps all the way around your head like a band. It has soft materials on all the parts that touch your skin, and it doesn’t have too many rough parts that will catch and pull on your hair. You can pull it down on top of your dome by pressing a button that loosens up that crown, and then you can ratchet it into place with a dial that tightens it for stability.

Vive and Rift use velcro and ski-goggle bands to stay in place, and that’s a constant struggle in terms of comfort. Those materials pull on your hair and do a terrible job at distributing the weight.

PSVR also has another button that enables you to instantly adjust the distance that the screen casing sits from your face. This enables you to get the exact position you want even if you wear glasses. I also like this because when the screen fogs up — something that happens with all VR headsets — you can quickly evaporate that moisture by pulling the screen out.

It’s obvious at this point that any future Vive or Rift 2.0s will need to behave a lot more like PSVRs in terms of how they work as wearable computers. 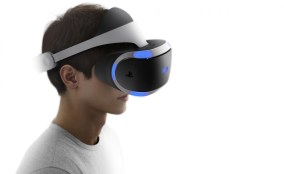 Above: A virtual boy!

It has better industrial design

PSVR looks way cooler that any of its competitors. I think the Rift has a decent, understated style while the Vive looks like it was put together in a garage. That doesn’t matter when you’re in VR, but I can see why you would want your futuristic headset that you’re spending half a grand on (not including the console) to look like it is really from the future.

And the PSVR would not look out of place on the set of a time-travel film or something set in the undefined “near future.” Its white and black plastics strike clean, bold edges. You won’t see any screw and almost no seams. It’s almost like it uses manufacturing processes that humans haven’t invented yet.

Then you have the shimmering blue lights. Now, I said that the Vive looks like it was built in a garage, and part of that bumpy, uneven design is so that the Vive can see the lightbeams from its sensor towers to process positional tracking. I can understand an ugly form factor when the technology requires it. But the thing with the PSVR is that its blue lighting is both functional and beautiful. The camera uses those lights for positional tracking, and Sony still found a way to cook that into its aesthetics.

Oculus Rift, HTC Vive, and PSVR all have decent displays, but Sony comes out on top when it comes to overall clarity. I don’t think this is due to resolution. Instead, I think that the console VR headset has better optical tech. If you break open all of these HMDs, you’ll find relatively tiny monitors that are then blown up through special lenses to overtake most of your vision.

On Vive and Rift, some of the detail is lost in that conversion between the display and your eyes. This means it’s often difficult to make fine-grained objects like text look clear. And when you watch movies or other video media, Oculus’s and HTC’s hardware makes the visuals look just fuzzy enough that it is unpleasant.

But PSVR does an excellent job with text and high-def video. I never struggle to make out letters, and video looks great even when it’s blown up on a virtual 100-inch screen just a few feet from my face.

But what about everything else?

Sony has built some clear advantages into the PSVR, but I’m not sure that necessarily extends to its capabilities as a VR device. It is easier to use and less expensive, but it also has more limitations. It isn’t great at tracking your position. The Move controllers are not nearly as ergonomic as the headset. And Sony controls the experiences, which is a serious hindrance at this point of VRs life.

I’ll get into those shortcomings more when I go over how the PSVR is worse than Vive and Rift, but you can read my review-in-progress if you want to understand more about Sony’s venture into virtual realty.