One of the biggest mobile games in the world is coming to Nintendo’s 3DS handheld.

Developer GungHo Online Entertainment will port its popular Puzzle & Dragons match-three puzzle role-playing game to the 3D portable under the name Puzzle & Dragons Z, according to Japanese-centric gaming blog Gematsu. The title is due out on the Nintendo system later this year.

Puzzle & Dragons is one of the fastest growing games around the world, but it is especially lucrative in Japan. The mobile title is generating roughly $2.5 million a day in revenue from in-app purchases. That’s a massive number that has Puzzle & Dragons on its way to bringing in $1 billion in total revenue. It would be the first mobile-only game to reach that figure. 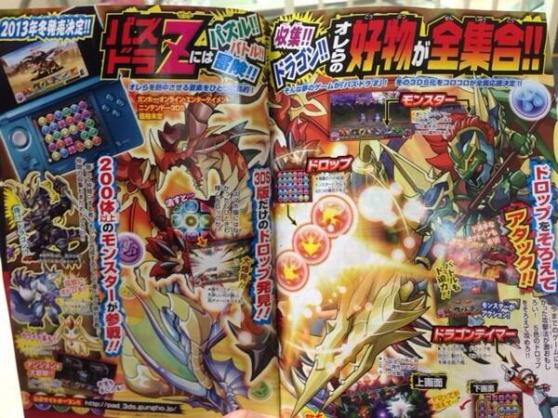 We’ve contacted developer GungHo to determine how it plans to monetize the title on Nintendo’s handheld. Puzzle & Dragons is free-to-play on iOS and Android. The developer makes money solely from microtransactions. That doesn’t jive with how Nintendo deals with games on 3DS, where most titles sell for $30 to $40 each and in-game purchases are rare.

The magazine story also doesn’t clarify if the title is due out in the states or if it is a download-only or a physical product. Again, we’ve asked GungHo for these details, but the Japanese developer has yet to respond.

The 3DS version will come with 200 collectible monsters, which each affect how the puzzle gameplay works. Puzzle & Dragons Z will also introduce new special elements like explosions that clear much of the play area.

We’ll update this story with any new information.