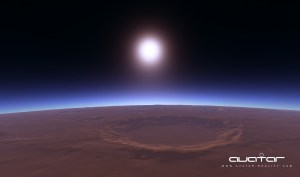 The discovery of water on Mars might spur a lot of interest in the science fiction dream of terraforming the Red Planet into a habitable place. That could be good for Avatar Reality, a virtual world company in Honolulu that is building “Blue Mars,” a 3-D world with ambitious graphics and a setting that takes place after the successful colonization of Mars.

It is the brainchild of Kazuo Hashimoto, chief executive officer, and his cofounder Li-Han Chen, vice president of development. It is being bankrolled so far by Henk Rogers, the video game pioneer who discovered Tetris and brought it to the West. 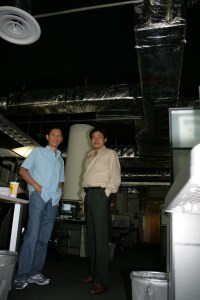 Their virtual world has some of the prettiest graphics I’ve ever seen and is one of the most ambitious in the works; but, then, they’re used to big bets. Their last collaboration was on the “Final Fantasy: The Spirits Within” movie, a $137 million computer-animated film that was an artistic tour de force when it debuted in 2001 but bombed in the market.

This new venture is another grand undertaking. Hashimoto and Chen started the company at the end of 2006. At that time, Rogers had sold his company Blue Lava Wireless for $137 million to Jamdat Mobile (which EA later bought). Rogers then decided to pour his money into a number of startups. He also started the Blue Planet Foundation, an environmental nonprofit aimed at cleaning up the earth.

“With the NASA news, it will make our story more believable,” said Hashimoto.

While Rogers was obssesed with the idea of terraforming Mars, Chen and Hashimoto thought they could deliver much more realistic avatars, or human characters, in a virtual world. Their experience with the Final Fantasy movie taught them that overly realistic characters didn’t work. Yet they felt that they could do much better than the graphics of avatars in Linden Labs’ “Second Life.” Hashimoto said that the 3-D graphics of Second Life were acceptable to nongamers, but not to gamers. While other popular worlds with cartoon-style graphics are aimed at kids, Blue Mars will be aimed at adults. 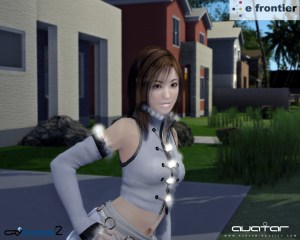 “There were many things that people complained about,” Hashimoto said. “We thought we could fix all of those things and that might be a business that would be big enough to interest Henk.”

The Final Fantasy film, whose team was housed in the same Honolulu skyscraper as Avatar Reality and Rogers’ businesses, had more than 240 people working on it. Avatar Reality has 21 employees and will likely build up to 35 people before it launches in 2009. A beta version is expected to be available to the public by the end of 2008.

Rogers agreed to fund it because the theme of Blue Mars fit with his dream of an idealized planet. It also offered the chance to improve the technology culture of Hawaii. Rogers graduated from the University of Hawaii and lives on the Big Island. 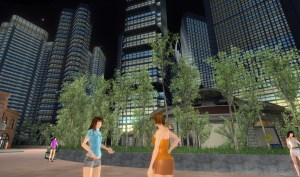 Rogers said in an interview earlier this year that he thinks the human race as a species should have a backup (just as game developer Richard Garriott said in his interview last week). The Mars colonization efforts are aimed at making sure the species survives.

“It’s somewhat futuristic, somewhat environmental,” said Chen. “We won’t have gasoline on Blue Mars. Things will be solar-powered or hydrogen-powered. The look of the environment is sci-fi, in the year 2177. It’s totally alien to what we know. We give creative freedom to developers like us to create cities that blend the familiar and the futuristic.” 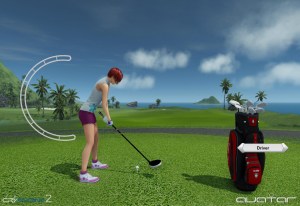 The company will outsource most of the 3-D art work for the world. It will also offer an open-source style platform for developers, who can create venues inside the world that serve as casual games. As demos, Avatar Reality created a golf game and a bowling game that users can play inside the world. The company is inviting developers to use its tools to create their own customized sectors.

The company has a variety of options for making money, including licensing schemes with developers, in-world advertising and the sale of virtual items. While Second Life leases land for a fee, Avatar Reality plans to charge people based on the traffic they draw, akin to a CPM model. That way, it can get more revenue based on high-traffic venues, and its server costs won’t be high based on the ownership of land. 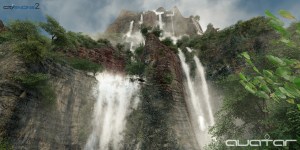 The technology of the game is advanced. Avatar Reality has licensed the Cry Engine from Crytek, maker of the graphically beautiful “Far Cry” series of games, known for giving gamers views of breathtaking landscapes. The sites within Blue Mars include terraformed areas such as a waterfall, complete with foliage that moves in the wind as well as shadows and fog. The waterfall is one of the places that users could visit and play mini-games such as a hang-gliding game.

All of this will require a PC with an Nvidia 8800 graphics card or better. By 2009, that should be a standard offering in even the cheapest of new computers. The company’s servers will be able to accommodate as many as 10,000 people in a square kilometer region of land, while other worlds often limit their regions to 3,000 users or less. In this sense, the world will truly be a “massively multiplayer” online world. 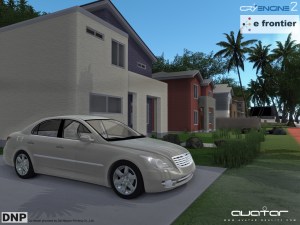 Avatar Reality is seeking to raise a second round of funding from institutions now. Next week, Avatar Reality will be one of the companies exhibiting its demo at the Siggraph graphics conference in Los Angeles. It will also make an appearance at Nvidia’s Nvision 08 conference in San Jose starting Aug. 25. The company already has Internet chat and other services working now.

If it all seems like a big gamble, Hashimoto agrees.

“We think it’s going to be something no one else has seen before,” he said.