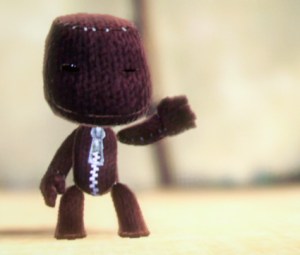 NEW YORK CITY—Sony is pulling out the stops to celebrate the launch of a critical game, LittleBigPlanet, from developer Media Molecule. In the game, you can customize a group of ragdoll characters and use them to solve puzzles to navigate a visually cute world that makes you feel like you’re moving through a model railroad landscape. The console maker needs this game to attract mainstream audiences to the PlayStation 3 and so it held a 24-hour Game Jam at Parsons The New School for Design to celebrate the October 21 game release. Kareem Ettouney, art director of LittleBigPlanet and co-founder of Media Molecule, was on hand to judge the competition. He talked about the competition, as well as the current shift in game design from narrative to user-generated playgrounds, in this exclusive interview.

VB: What do you think of the results of what these students were able to do in 24 hours?

KE: When Sony organized this collaboration with Parsons we were thrilled because it meant that the game for the first time would be in the hands of an amazing type of people with great talent and skills. When we came (to New York), we had high expectations, but we were blown away. Not only did they come up with their own unique level ideas — we had told them they didn’t have to make a gameplay level, but each and every team created a playable level. They designed it from sketching on the walls to building and collaborating on the project to realize their ideas. Not only were we impressed with the cohesion of the results, but with the innovative use of the tools. We were hoping that some of this would come eventually, but not in the first 24 hours. 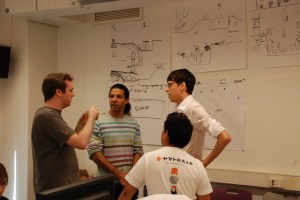 VB: How do you see Spore and LittleBigPlanet changing the way games are made moving forward?

KE (pictured, center left): A lot of people ask the question, “What happens to game developers with the explosion of user-generated content?” And the answer is, “We evolve.” Now you have Rock Band allowing gamers to become famous through YouTube. That doesn’t change the need for having good music schools and good music producers. I believe the game development community will learn and evolve and respond and react to the phenomenon of user-generated content. Allowing gamers to express themselves will only enrich the experience. 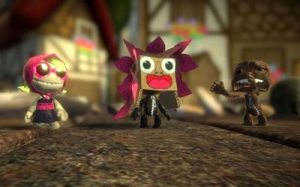 VB: Do you see what’s happening this fall with empowering gamers as a shift in the games industry?

KE: I think all of the game industry has done an incredible job of using the technology they have available. But for the last 10 to 15 years everything was graphics-driven. You heard about how many polygons were on the screen at once or how a car can crash and take damage with realistic physics. After this period, we’ve entered into a period that is about expression. It’s about expression and content and not about the capabilities of the consoles. We are moving into a territory that’s much more fertile.

VB: Game “mods” have been used for years to get gamers jobs in the industry. Now that LittleBigPlanet is offering console gamers, and in essence a more mainstream audience these tools, do you see that happening?

KE: I think this game can definitely help people get jobs in the industry. Imagine a guy going into a job with five levels of LittleBigPlanet and you get to play his creation. But not only that, imagine what that guy has already done within that world in terms of building up an audience. People know his levels and know his name. They want to see his new creation. Future game creators will enter a job interview already known. We hope LittleBigPlanet plays a part in getting new game developers jobs and also making them stars. 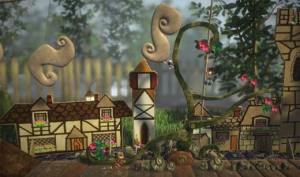 VB: Since your game has been part of this contest at Parsons, are there plans to incorporate it into curriculum in education?

KE: There are aspirations and dreams. Sony has been great with us in making things happen. This whole (Parsons) event was put together by them. I’ve already spoken to people about how exciting it would be to have LittleBigPlanet to show how food goes through your digestive system or to use this as your own PowerPoint presentation. Designing and explaining complex ideas have always been the most problematic part of the creative process, especially when your idea is very interactive and dynamic. With LittleBigPlanet, we don’t have concrete plans yet, but there are lots of dreams and aspirations and we hope to make it happen.

VB: Now that you’re ready to ship the game, what’s next for Media Molecule?

KE: We’re working with Sony to make this work. It’s not about shipping the game and then saying goodbye. It’s all about inspiring and feeding the community and reacting and responding to what they want. We’ll support this game with new content through downloads.