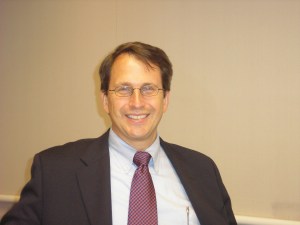 Rick Bergman is the senior vice president and general manager of the graphics products group at chip company Advanced Micro Devices. His team of graphics chip designers –- formerly known as ATI Technologies until AMD acquired the company in 2006 — has scored well with the recent launch of the ATI Radeon HD 4800 series family.

The so-called “sweet spot” strategy caught rival Nvidia flat-footed. While Nvidia created a high-end graphics chip that burned a lot of power, AMD created a smaller chip that targeted the middle of the market. It decided that it could put two such chips into a board to create a low-cost, top-performance solution for high-end gamers. Meanwhile, the single chips could be easily targeted toward the mid-range and low-end of the markets. Nvidia, by contrast, has had to wait longer to redesign its chips for the mid-range and low-end markets. The result has been a big shift in market share from Nvidia to AMD, whose graphics chip division is now profitable after a tough 2007. I spoke with him at AMD’s recent analyst meeting at its headquarters in Sunnyvale, Calif., after Bergman gave an upbeat outlook for AMD’s graphics business.

VB: How long ago did ATI started thinking about its “sweet spot” strategy?
RB: It was three or four years ago. We recognized we could not continue on with huge die sizes. It was before the merger with Advanced Micro Devices. We were still working on a chip called the R600. We were thinking of what we could do for the R700. We decided we couldn’t do another chip that was so big because of power consumption. You can just plot how die sizes have grown generation after generation.

VB: Did it take graphics chip designers longer than microprocessor designers to realize that power was going to be a problem?
RB: The microprocessor designers ran into it first because they were pushing frequency. When you do that, it pushes the circuits to the limit and consumes a lot of power. We started from a lower frequency base. Graphics processing units (GPUs) started requiring more and more performance to do better 3-D images. We weren’t able to lower voltage, and so it was clear we were going to run into the fundamental laws of physics.

VB: You looked at this problem from a different perspective when you were an underdog?
RB: About three years ago, we were around 50 percent plus market share position. We were not in a tailspin. We were looking at where the problems were. Where the growth was in the market. We had a chip called the R300. That was the first 256-bit GPU. It let us get the crown. It cascaded into multiple years of success for ATI. As we made this decision, we had chips like the R580 which were the best in the industry.

VB: How did the strategy gel?
RB: It wasn’t unanimous that we were headed down the right path. There were many painful discussions. It started to become clear when we taped out (finished the design of the chip). We knew our chip size, performance and power. We felt like we had a winner.

VB: The merger between AMD and ATI came in the middle of all this in 2006. Did that stretch out the execution on your strategy?
RB: The acquisition was a little bit of a distraction. But our teams stayed as focused as we could.

VB: There was a time when you were on the defensive.
RB: Yes, 2007 was a tough year for us. We were losing market share. Our products weren’t as competitive as we would have preferred.

VB: Has the result played out as you expected? Nvidia shot for the high end and you went for the sweet spot.
RB: They followed their script. We came in underneath with a superior solution.

VB: Fusion — the plan to combine a graphics chip and a microprocessor that was the impetus for the AMD-ATI merger — was being planned alongside this sweet spot strategy. Now the first Fusion chip has been delayed again until 2011.
RB: We’re trying to broaden the definition of Fusion. We probably made an error two years ago when we said that Fusion is a combination of the GPU and the CPU (central processing unit) on the same chip. That’s just an implementation question. It may not make sense as we look for more and more diverse solutions of the GPU and CPU working together. There were challenges in doing it. When you start looking at more advanced manufacturing technologies, where you can shrink the size of each component more, it becomes easier to integrate them together.

VB: Will the 2011 product target a certain market?
RB: We are going after mainstream clients and a Netbook market. That’s new for our strategy.

VB: In the meantime the sweet spot strategy will continue?
RB: They are independent. We will cascade the technology down through the low end of our product line. The sweet spot strategy is designed so that we can do that much more quickly, rather than wait through long cycles of a redesign.

VB: ATI has always aimed to be more aggressive at adopting new manufacturing technologies, which can give a design more performance and other benefits. Nvidia has been more cautious. It argues that you don’t want to try a new design and a new process at the same time.

RB: For the last six process advances at Taiwan Semiconductor Manufacturing Co., we have been first. I don’t understand Nvidia’s thinking there. But when a new process comes along, we jump on it. There are risks to that. We have our moments. When you switch to a new process, a lot of things can go wrong. When you don’t switch and stay with an existing process, there are a lot of tools that help you out. Once you have proven a process node, you are sure your subsequent chips will work fine. We have made it through issues with new processes and gotten through them just fine.

VB: What will happen with the transition to The Foundry Company, where AMD will separate its manufacturing into a separate company?
RB: Our strategy has always been to have multiple sources of manufacturing for our chips. We have used United Microelectronics. In the last few years, we used TSMC more. We have grown and are buying [500,000] wafers in a year. It makes sense for us to have multiple sources. We will work with TSMC, UMC and the new Foundry Company too. That’s going to happen over time.

VB: Have you been behind on the general-purpose GPU front [where a computer uses the graphics processor to do non-graphics tasks such as physics processing]?
RB: We were the first ones to talk about GP-GPU in October 2005. We talked about supporting physics calculations on the GPU and doing projects like Folding@Home. What you really need for it to be software is a robust software environment. Nvidia has its CUDA programming language, but that’s an interim step. You need open, standards-based environments such as OpenCL [an open programming environment created by Apple and supported by others] and DX11 [Microsoft’s graphics standard]. Ultimately they will prevail. It’s a big investment for us to support GP-GPU.

VB: Do you think an ecosystem will develop around AMD as it has for Nvidia, with new companies making use of their GP-GPU technology?
RB: That’s a contrast. They want the ecosystem to form around CUDA. We want it to form around OpenCL and DX11. As that happens, we know we will win, since standards win against proprietary solutions.

VB: A lot of your announcements are trailing theirs.
RB: We’ve been quiet, but we have the same support. We have millions of chips in the market with the GP-GPU capability. We think that our competitor is behind, and they are throwing up smoke screens in the core graphics area. They want to show they have something, and so they put more emphasis on CUDA.

VB: Is the mainstream market shifting to having stronger integrated graphics in chip sets? For a long time, Intel has offered low-end graphics capability in its chip sets. But it looks like it isn’t cutting it anymore.
RB: We used to compete against Intel in Intel chip sets. We did reasonably well. The challenge is they are so closely tied together it’s tough to break in. The pricing is challenging. The market is becoming savvier about the need for stand-alone graphics or better chip sets with better integrated graphics. The question is whether someone can break the hold that Intel has on the market.

VB: Do you think that people have a strong appetite for high-end graphics?
RB: If you look at the sales, it’s still healthy. The third quarter was down a little from last year. But the market keeps getting bigger and bigger.

VB: Is PC gaming healthy?
RB: There is a very compelling story on why PC gaming is so healthy now. When you consider shipments of high-end gaming rigs and strong sales of online games such as World of Warcraft, you can see how strong it is. Sales at the high end continue to astound me. We address that by putting two of our sweet spot chips into one board. The gaming platforms tend to be the first place where games appear, but we are in about 80 percent of the gaming consoles sold, since we’re in the Microsoft and Nintendo consoles.

VB: Do you have any worry that graphics may be impacted in the slowing economy?
RB: I don’t know if graphics will be singled out in terms of impact. We are heavy on the consumer side compared to the enterprise. Everyone in the world is hanging on to see how bad the storm will be in the quarter and going forward.

VB: Is the future good for graphics?
RB: Yes, we’re feeling good. I wish the economy were better. We have a strong product line. The amplitude of our gains would be higher if the market was stronger. But the flip side is that you better have a good lineup in a slow market or things will get ugly.

VB: I wonder what the Wii means for graphics. It’s such a low-end machine in terms of graphics.
RB: In some ways, I think it is great news for everybody. The Wii is opening up a lot of new households to games that haven’t played before in past generations. Sales keep going up and that is good for anyone.