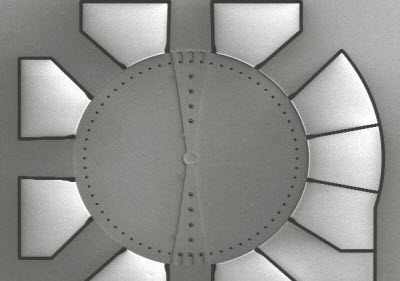 Get ready to move: Qualtré announced Wednesday that it raised $8 million in a second round of funding. The money will kickstart its business of selling chip-based gyroscopes that can serve as motion sensors for game consoles and consumer electronics gadgets.

Motion sensing is becoming important in a lot of devices, thanks to the success of Nintendo’s motion-sensing Wii game controller and Apple’s motion-sensing iPhone. Those devices use accelerometers, which are cheap but imprecise.

The Marlborough, Mass.-based company makes gyroscopes with a high degree of precision in sensing motion. These gyroscopes are built into silicon chips known as micro-electromechanical system (MEMS). The MEMS devices are designed to sense slight changes in motion, making them more precise.

Last year, Nintendo tried to improve the accuracy of the Wii with the launch of its Wii MotionPlus accessory, which enables a game machine to sense a twisting wrist. That device used gyroscope chips from InvenSense and Epson. But it still wasn’t as precise as it could have been, had it had six-axis control.

Many of today’s sensors have one or three-axis gyroscopes, but Qualtré’s will have up to six axis controls and will be embedded in a tiny $3 or so chip, said Edgar Masri, chief executive of the 15-person company, in an interview.

To date, the company has raised $13 million since its founding in 2008. Investors include Matrix Partners and Pilot House Ventures. Qualtré’s chips could be used in precise game controllers, such as the Sony Move motion-control system which lets you control a game by waving a wand-like device in front of a screen.

With a six-axis gyroscope, it would be much easier to reproduce in a game the feeling of shooting an arrow with a bow or swinging a golf club. Microsoft and Sony are launching devices this fall that allow those kinds of games to be played. But the accuracy is the question. And it remains to be seen if Qualtré has already missed a key window for launching its device. But Masri said he believes the number of applications will multiply with time.

“Our device is more like detecting whispers,” said Masri, the former chief executive of 3Com. “It’s more sensitive to rotation and detecting it. At the same time also more immune to shock, vibration and temperature.”

With this kind of accuracy, you could do a lot more than just shake your phone to make something happen. Motion sensing can also be used to assist global positioning system navigation. When a GPS signal is lost, the gyroscope chips can calculate the momentum and motion of a car and figure out where it has moved, even if there is no GPS location fix.

Masri said that commercially available gyroscope chips vibrate at low frequencies of 5 kilohertz to 50 kilohertz. They have to be recalibrated frequently. But the Qualtré gyroscopes operate at high frequency (2-10MHz), using something called bulk acoustic modes to provide superior accuracy. They can be more reliable and operate at wider temperature ranges, making them useful in a variety of consumer electronics devices. And they don’t need frequent calibration.

Market researcher Yole Développement forecasts a $732 million market for MEMS gyroscopes in consumer electronic applications for 2015, with multi-axis gyroscopes representing 80 percent of this demand.The idea for the business came from Farrokh Ayazi, chief technology officer of the company and a professor at Georgia Tech’s Integrated MEMS Laboratory. The company plans to use the money to complete its chip designs and launch them in the near future. Rivals include InvenSense and ST Microelectronics. Qualtré will likely use contract manufacturers to produce its MEMS chips for its customers.

“The basic elements are proven in our labs and we are engaged with customer prospects,” Masri said.