One of the best games of this year’s Electronic Entertainment Expo is Quantic Dream’s Beyond: Two Souls. 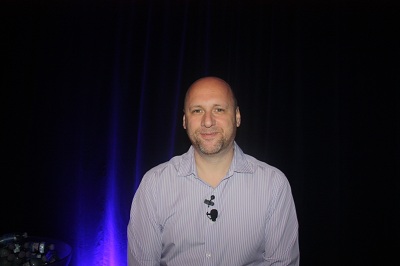 Sony unveiled the game at its E3 press conference on Monday, but it also showed an extended demonstration behind closed doors. We got a preview, narrated by game writer and director David Cage (pictured right), and here are our impressions.

The French developer’s previous game was Heavy Rain, a cinematic title that forced players to make instant life-or-death decisions by pressing one of the four main buttons on a PlayStation 3 controller. The gameplay of Beyond: Two Souls is pretty similar, which will no doubt lead to criticism that the title, like its predecessor, is too movie-like and not very game-like. But the experience of this title seems a lot smoother and Quantic Dream has learned better when to make a scene flow like a movie and when to make it a game.

“What genre is this game?” Cage asked, rhetorically, during the demo. “It’s hard to answer. Heavy Rain was a dark game, like the movie Seven. Beyond is quite different. It has a better sense of interactivity, with more direct control for the user. You control the characters all of the time.”

In the new PlayStation 3 game, the main character is a girl named Jody Holmes, who is gifted with an ability to link to an invisible entity that she has named Aiden. Aiden is a ghost, spirit, or soul who takes the form of a shimmering light that only Jody can see. The game covers 15 years of her life, from child to teen to adult.

“She feels this presence,” Cage said. “Even when she was a kid, it was a strange thing for her to live with this spirit. She doesn’t know if it is a ghost. It doesn’t obey. It can be nice and protective. It can be violent and jealous.”

The spirit can make things happen in the real world. When the authorities discover Jody’s special power,, they want to capture and study her. She tries to get away, and Aiden helps her. Cage said he wrote the story this way because he lost someone special in his life and wondered what it would be like on the other side of life and death.

The scene that Quantic Dream showed started with a 24-year-old Jody on the run, sleeping on a train. She is played by actress Ellen Page, who turns out a wonderful emotion-ladened performance. Cage said he wrote the script with Page in mind as the lead. Aiden appears over Jody and wants to wake her up, but she is exhausted. Aiden can fly around and disturb other passengers, and even go outside the train into the rain. But he is limited to traveling only a certain distance from Jody, maybe a hundred yards.

Aiden snatches a newspaper from someone on the train and goofs off until some police officers board the train and start searching for Jody. Aiden wakes her up and warns her, and she begins to run.

The train is shaky and she has to time her movement properly to escape the clutches of the police. She climbs on the roof and then starts a hairy run through the rain as five cops try to catch her. She brawls with the cops and, miraculously, no one falls off. But she jumps from the train, Aiden shields her, and she lands safely on the ground.

But the pursuit doesn’t end there. The police send dogs into the woods, which are beautifully rendered, to chase Jody. She pulls a stick off a tree and hits the dogs. She also throws rocks, making them squeal until they run away. She has to scramble up a cliff face to escape detection. She comes upon some more cops. Aiden takes possession of one of them and creates a distraction, crashing a police car. Jody makes a run for it and steals a motorcycle. A helicopter pursues her, and she is eventually surrounded by a SWAT team.

The human faces and bodies look incredibly realistic. That is because Quantic Dream used a motion-capture technology that captures, faces, voice performances, and body movements all at the same time.

She orders Aiden to stop the SWAT team, and he goes on the attack. “Fucking help me!” she screams. Aiden takes all of the SWAT team members down. The helicopter crashes in flames. And Jody goes up to one of the wounded team  members and says, “Tell them to leave me the fuck alone because next time I’ll kill everyone.”

It’s an incredible scene, one of the finest in video games, and one of the best at E3. Cage said the choices the player makes will have consequences and, as in Heavy Rain, result in different endings. So far, Cage says no information is available on whether the game will use Sony’s Move motion controller.