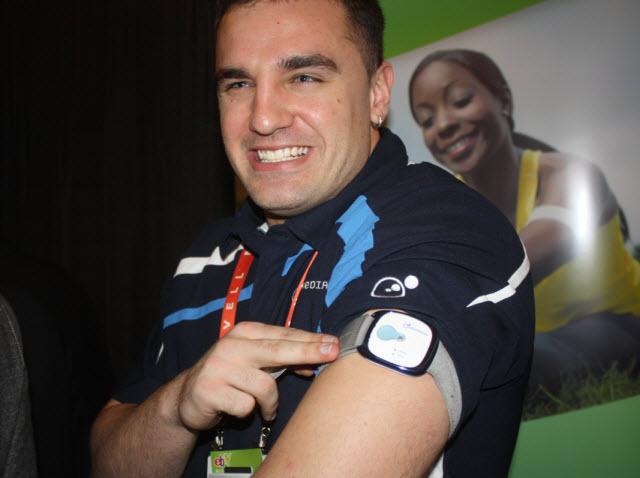 The Quantified Self is one of the big trends of 2012, as we noted in our recent summary of the Consumer Electronics Show.

As everything analog shifts to digital, we can collect a huge amount of data about ourselves. As I noted in our earlier story, the trend was spearheaded by researchers who wanted a “quantified self,” or self-knowledge through numbers that measure things such as how long we sleep or how many stairs we can climb in a day. Most people don’t have the patience to sift through all the data that they could collect about themselves. But a number of new devices are making it easier to do, bringing us the opportunity both to improve our lives, have more fun, and think more about privacy issues. 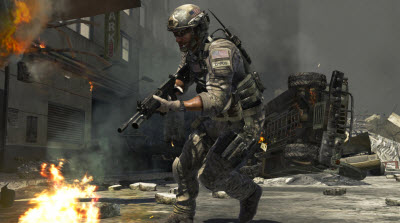 This shift to quantified self gadgets is also coming with a change in attitudes about privacy, or at least it seems that way. The technology is racing ahead, before we really decide whether we prefer personalization over privacy. Webcams, camera phones, and motion-sensing systems are just the beginning of this technological explosion. Used in conjunction with the cloud, or web-connected data centers, the quantified self movement promises to capture a huge amount of information about ourselves and contribute considerably to the Big Data infrastructure that enterprises are creating to safely store all of this information. In that sense, the Quantified Self really enlists just about every technology company imaginable in the service of recording our daily lives.

For the narcissists among us, this is like heaven. WordPress.com, which hosts our VentureBeat blog, reported that in 2011, I wrote 1,787 posts consisting of 1,097,692 words. Now I know my goal for this year is to do 1,788 posts with 1,097,692 words. However, it was worth noting that I was the least efficient writer at VentureBeat, with 614 words per post and the least traffic per post compared to my fellow writers, who were less wordy and had higher average traffic per post.

A lot of this trend started in video games, which have taken it to an extreme. In Call of Duty Modern Warfare 3, for instance, I know everything about my performance in multiplayer combat since the game launched on Nov. 8. I have played the game for 27 hours and 39 minutes and achieved a multiplayer rank of Lieutenant Colonel II, or 58. I’m about 72 percent of the way through the multiplayer ladder and have 80 wins and 120 losses. In the multiplayer combat matches, I have 1,375 kills and 3,213 deaths, for a 0.427 kill/death ratio. I’ve had 93 headshots and 366 assists with a 9 percent accuracy rate.

To my non-gaming friends, my dedication is impressive. Of course, other players know just how bad I am. My total score is 162,490, which places me at No. 5,518,786 in the overall Call of Duty multiplayer universe. On average, I score 826 points a match, which is kind of pathetic compared to my performance in Call of Duty Black Ops from last year. But that game had some much easier ways to kill, such as the remote-controlled exploding car, rewarded after I could get just two kills in a row. 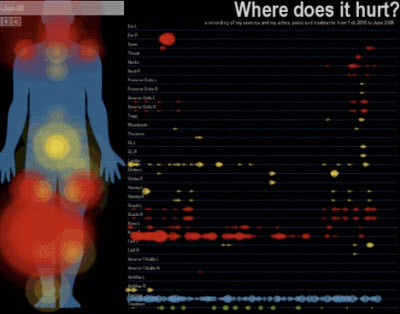 In the virtual world of the game, it’s easy to record digital stats. But with the proliferation of new devices that measure non-computer activities, we can measure so much more. The history of this behavior goes as far back as 1955 to Jerry Davidson, who has obsessively recorded his life. Kevin Kelly blogs about The Quantified Self and all things related to self-surveillance.

“Unless something can be measured, it cannot be improved,” Kelly wrote. “So we are on a quest to collect as many personal tools that will assist us in quantifiable measurement of ourselves. We welcome tools that help us see and understand bodies and minds so that we can figure out what humans are here for.”

Now I can move on to more important measurements such as how much activity I engage in during the day. The Striiv “personal trainer in my pocket” tells me I am walking an average of 9,968 steps in a day, or about 4.7 miles. I burn 1,053 calories in a day for about 106 minutes in the day. That earns me 40,425 points in a day which I can use to play the Striiv game and motivate myself. My personal best was 17,983 steps in a day, or 7.8 miles, walked at CES. I burned 1,806 calories that day. I can compete against other Striiv users through daily challenges, which “gamifies” the exercise activity by making it into a social competition.

You can get more information back from the Basis Band from Basis Science. Basis gives you a wrist band that tracks your heart rate, skin temperature, ambient temperature, and your galvanic skin response (GSR, or how much you are sweating). The sweat and the heart rate gives the added information about how stressed out you are. If you match this up to your Google Calendar, you could figure out which person stresses you out the most or how much your heart rate leaps when you are stuck in a traffic jam. 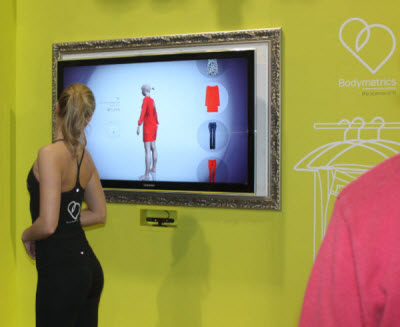 Basis also has a web site that you can use to see the results of your daily activities, such as calories burned, the number of steps you have taken, the hours of sleep, and the points you have earned. All of that data can be quantified and analyzed over time on the Basis web site. You get positive reinforcement in the form of points for your activities.

“There is a lot of interesting stuff happening in the quantified-self movement,” said Jeff Holove, chief executive of Basis Science, in an interview. “It is understanding ourselves better and measuring ourselves better and, in the case of health, using that data to inform our decisions on how we live our lives. We are gathering scientifically meaningful data and then translating it to a much broader audience than the people who have the knowledge and stamina to deal with lots of data.” 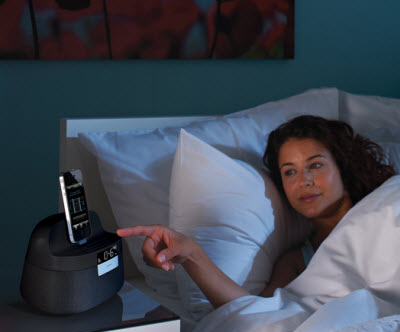 Basis boils the metrics down to things that can be easily understood, though “quantified selfers” can dig into the data further if they wish. Nike, FitBit, Jawbone and a number of other companies have similar devices. As far as self-measurement goes, Microsoft’s Kinect motion-sensing system is pretty good at capturing your whole body. Bodymetrics (pictured above) uses Kinect to understand your body shape so it can tell you where clothes will be tight or loose on your form as you go virtual shopping.

With sleep monitors like Gear4’s upcoming Sleep Clock (pictured left), you don’t even have to wear a wrist band to get more information about yourself. The Sleep Clock will use a Doppler radar to detect your breathing and movement during the night.

It can calculate the exact number of minutes you slept in a night, how many minutes it took to fall asleep, and when is the ideal time to wake you up. It can tell the difference between when you are in a deep sleep, when it isn’t good to wake you up, to a light sleep. After a year of such data, it will be much easier to wake up at exactly the lightest point in your sleep cycle.

There are downsides to knowing so much about ourselves. The problem is very similar to people “oversharing” information about themselves on social networks such as Facebook or Twitter. If the federal authorities got hold of your GSR data, they could figure out if you were lying during an interview, since GSR can be used in lie detector tests.

George Orwell, the author of 1984, the seminal novel about Big Brother watching you, couldn’t have planned a better way to capture everything that we do in a day. But because of the potential benefits, many people seem eager to be measured, as long as their privacy is protected. The space where you can operate privately is becoming more and more constrained. 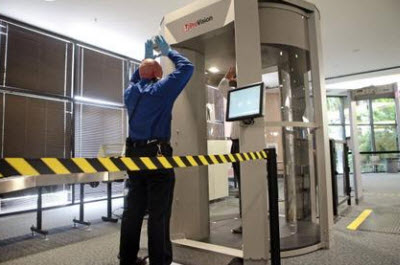 If you want to fly, for instance, the Transportation Security Adminstration airport scanners can now collect extremely detailed imagery of what you look like under your clothes. The full-body scanner data is supposed to be used for safety purposes only, but it’s certainly spooky. But wouldn’t it be great if the TSA could tell you, “you’re thinner this time.”

Steve Jobs, the former chief of Apple, created some of the key technology for monitoring our lives with the iPhone and the iPad, which can measure our location, our movements, our cell phone usage, and other deeply personal kinds of data. Yet he railed against reporters who invaded his privacy by disclosing information about his deteriorating health.

Will Wright, the world famous game designer who created The Sims and SimCity, believes that all of the Big Data collected about our personal lives can be used to create new kinds of mobile-based games which he calls “personal gaming.” Personal gaming is a game that is customized for each individual player, taking into account real-life situations surrounding the player that make the game more interesting to that player.

“How can we make a system that understands enough about you and gives you situational awareness?” Wright said in a recent interview. “It could take into account what time of day it is, where you are, how much money is in your pocket. Imagine if you could open Google Maps and it shows you things that are interesting to you on the map.”

Although he realizes many people are guarded about privacy, he notes that the younger generation is more comfortable sharing information about themselves. And they will willingly share it if they could be virtually guaranteed a great deal of entertainment in return. If you entice people with enough game-oriented entertainment, they won’t mind sharing that information, he said. Wright has created a company called HiveMind to execute on this vision.