Temple Gates Games debuted its take on the popular sci-fi card game Race for the Galaxy for mobile devices in May, and it launched its PC version of the digital card game in June. Now the company is adding its third expansion, Brink of War, so you can further conquer the galaxy.

The expansion comes from studio head Theresa Duringer, a board game fanatic and indie game developer. The game has been a best-selling title on iOS in the board game category.

This is an adaption of best-selling board/card game, which has won Best Card Game, and Card Game of the year from BoardGameGeek, Fairplay, and TricTrac. It has sold over a million copies worldwide as a card game — a significant achievement.

The original tabletop game came from Tom Lehmann, and Rio Grande Games published it in 2008. Duringer met Lehmann through a ballroom dancing community, and he invited her to come play the game with him. Then she pitched him on doing a mobile version of the game. 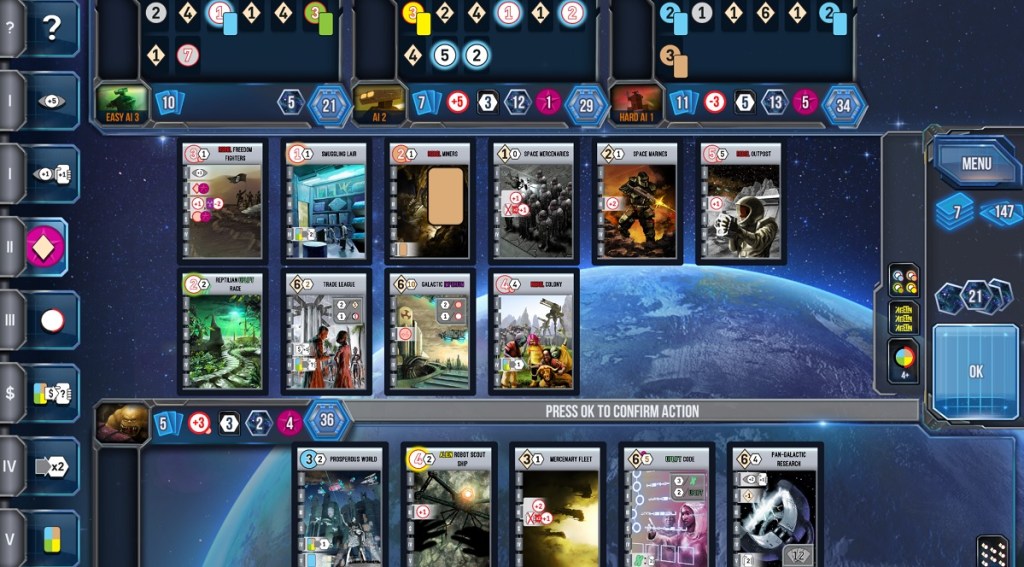 Above: Brink of War has four new starting planets.

In an email, Duringer said that Brink of War includes four new starting worlds, 36 new developments to build and worlds to settle, five new goals, and a feature dubbed prestige. This adds a new way to earn victory and gain the advantage against opponents. Search lets players find particular types of cards to complement their galactic strategies.

Instead, it learns by playing randomly, making predictions at the turn level on which player is winning, and updating the weights in its multilayer perceptron architecture such that the change between predictions from one turn to the next is diminished. Through this method, over 30,000 training games, it has learned the black box function that best represents the relationship between input (the state of the game) and output (prediction of who’s winning) for the neural network that drives our AI. This makes the game replayable over time.

Duringer tapped an artificial intelligence engine developed by AI pioneer Keldon Jones. Jones created the AI for Race for the Galaxy as a research project on neural networks. He released it as open source code, and Duringer used the A.I. as part of her game in a partnership with Jones and Lehmann. Jones’ method was based on one created by Gerald Tesauro, who created TD Gammon, which is based on backgammon.