I’m only a few hours into Rage 2, but I know I like it enough that I’m going to beat it. And that’s despite not caring for a good deal of Bethesda’s newest shooter, at least when it comes to stuff besides its gameplay.

Rage 2 comes out for PlayStation 4, Xbox One, and PC on May 14. I played the PC version. Developer id Software is coming off of the wonderful Doom reboot of 2016. It made this game with Avalanche Studios, the company behind the Just Cause series and the 2015 Mad Max game.

Just like with Doom, Rage 2 has some of the best-feeling shooting I’ve ever experienced in a game. And like with Just Cause, the open world is dense with things to do. I just wish Rage 2 has a more interesting setting and story.

I’ve played a lot of games that are about shooting things with guns. Often, the actual shooting isn’t all that important. You’re just aiming and clicking on enemies as a way to progress the story. Gunplay can quickly feel repetitive and uninteresting in most games.

That won’t happen in Rage 2. The guns feel fantastic. Each shot has impact. The weapons don’t come across as glorified Nerf guns. They have weight. They’re powerful, and you feel powerful when you’re using them. 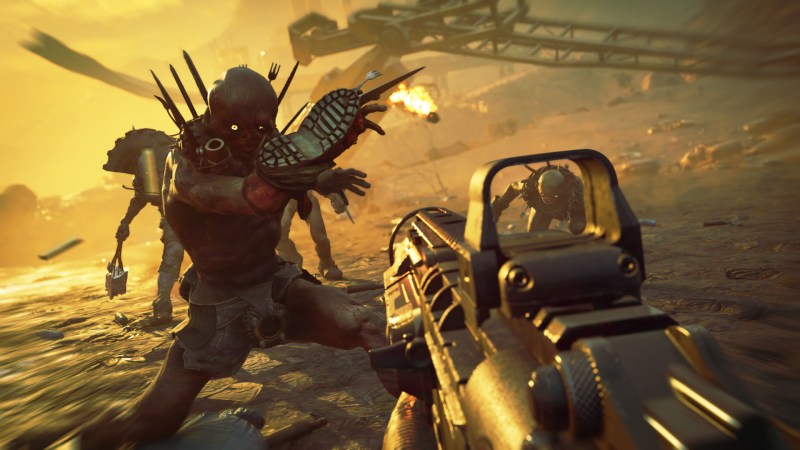 Above: Guns are great in Rage 2.

Rage 2’s open world is a lot of fun to explore. First off, you get to traverse it in cool combat cars that are fast, easy to control, and have weapons. But you also have a lot to do just about everywhere you go. The map has a bunch of side activities and areas filled with important items. Completing these missions or hunting down chests gives you stuff that helps make your character stronger.

It’s the ideal progression system. Not only is riding around and finding new places to shoot and stuff to explore fun, but it’s also rewarding and helps make you stronger.

Rage 2 is another Mad Max-inspired game in an industry that’s already filled with too many postapocalyptic worlds. Visually, it’s just all familiar. Shanty towns made out of the ruins of the old world, marauding gangs of scavengers, sand (lots and lots of sand), and so on.

The developers knew that this was all a bit stale, so they tried to add some personality and color to its aesthetic by randomly highlighting things with pink and trying to make as much stuff, including the violence, as over-the-top as possible. But even that kind of stylized Mad Max world has already been done by Borderlands. 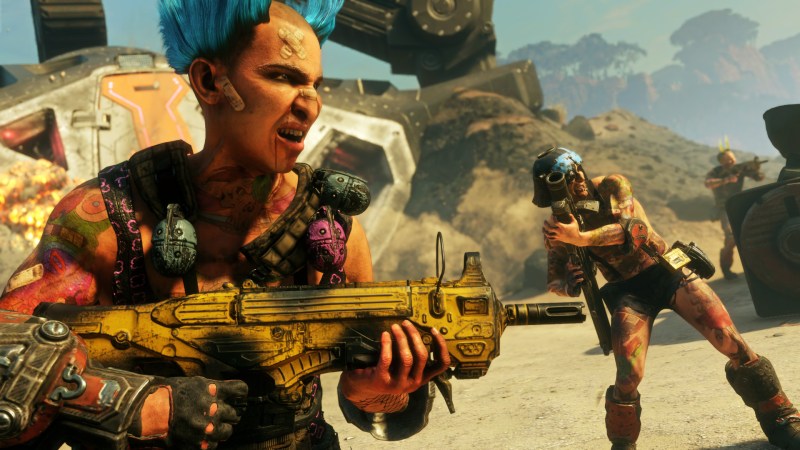 Above: Gang members always have to have cool hair after the apocalypse.

Rage 2 has a story. Which, sure, plenty of games do. Rage 2 just has too much of one, especially in the beginning. The whole thing starts out with a prologue cinematic that throws out too many proper nouns and narration from a generic bad guy. It’s the worst way to get me invested in something before I start playing.

Once I did actually gain control of my character, I started having fun. But every time a new cutscene would start or some character would start talking to me, I’d get annoyed. Doom was great about making sure its story had a minimal impact on gameplay. Because for these kinds of guns-blazing shooters, I just don’t care that much about whatever mediocre plot is serving as my motivation to go kill things. 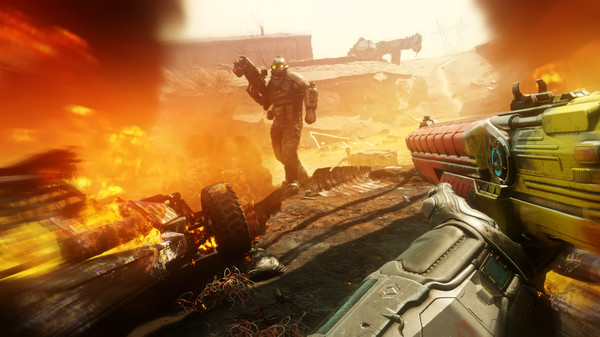 Above: Fire and sand.

I’m not digging Rage 2’s story or setting. But I still have a ways to go before completing it. Maybe the plot will win me over. Maybe the world will do something surprising and evoke something besides Mad Max.

But even if it doesn’t, I still like Rage 2. Artistically, it’s uninspired. But mechanically, it’s one of the best shooters I’ve played in years. Fun wins out.

Rage 2 comes out on May 14 for PlayStation 4, Xbox One, and PC. Bethesda gave GamesBeat a digital PC code for the purposes of this review.