Every year at the Game Developers Conference in San Francisco, Rami Ismail‘s panel #1ReasonToBe showcases diverse voices from around the world. This year, the specter of visa rejections hung heavy in the room, a stark reminder that not everyone has access to one of the industry’s most important developer events.

Ismail kicked off the event by showing a map in which GDC’s attendees had placed markers on their countries of origin. The markers told a story about who could actually make it to the event — whether that’s because of how expensive the conference is or because of visa rejections, which made it impossible for several of #1ReasonToBe’s original speakers to attend.

“This is not a map of the world,” said Ismail. “This is a map of people who can come to GDC.”

Ismail went through several rounds of “backup speakers” while planning the panel, selecting them from every continent in the world. Most couldn’t make it because the U.S. rejected their visa applications.

Those who could make it to the panel shared their journeys and roadblocks to success. Most Played Games’ developer Javi Almirante from the Philippines, Game Cooks’ marketing director Lara Noujaim from Lebanon, and Lomay Tech cofounder Matthieu Rabehaja of Madagascar detailed challenges like stagnant internet speeds, power outages, the lack of consumer purchasing power, and limited tech education — and how they and their studios deal with these obstacles.

“When you have power cuts for five hours a day, you know you have to crunch to deliver in time,” said Rabehaja, whose studio created the mobile racing game Gazkar.

Infrastructure is just one set of challenges, though. The developers must also fight against preconceptions. When CEO and founder of Colombian studios Below The Game and Syck Carlos Rocha approaches publishers, he frequently hears the same comments: “You look way too young. You look way too Latin.” And Irina Moraru explained how she created a culture of learning at her Romania-based studio FaeryDust Games, which she cofounded and leads as CEO. This is to make up for the lack of emphasis on soft skills like creativity or leadership in the Romanian education system and culture.

“I think one of my big hopes with #1ReasonToBe remains that we can show the diversity of development from around the world, and show that in places that aren’t here, or aren’t countries in which GDC happens, basically, there’s just a little bit more perseverance involved in trying to make a game,” said Ismail in an interview with GamesBeat. “That perseverance is something that’s in a way beautiful, worth celebrating, worth being thankful for.”

That’s perseverance through technical and financial challenges, sanctions and the inability to receive development kits, and of course visa rejections. The last one especially affected Almirante, who agreed to speak after fellow Filipino developer Gwendolyn Foster was unable to attend because of visa issues. Foster is at the heart of the development scene in her country. She’s head of operations at Let’s Play Manila, an organization that hosts meetups and other events for developers. She’s also the secretary of the board of directors for the local branch of the International Game Developers Association.

Almirante dedicated a presentation slide to Foster, who tapped him to speak at #1ReasonToBe in her place.

“We’re very thankful to Javi here, because he did do an amazing job,” said Ismail. “The journey of planning this panel was full of highs and lows. At the low point, the visa rejection meant we couldn’t have a speaker whose story is valuable, and the high point was I got to pick somebody else who was valuable. But it would be nice to be able to organize the panel without the hurt. And it’s not my hurt. It’s the hurt of others, the hurt of—even Javi now, I wouldn’t call it guilt, but sadness of being here instead of Gwen.” 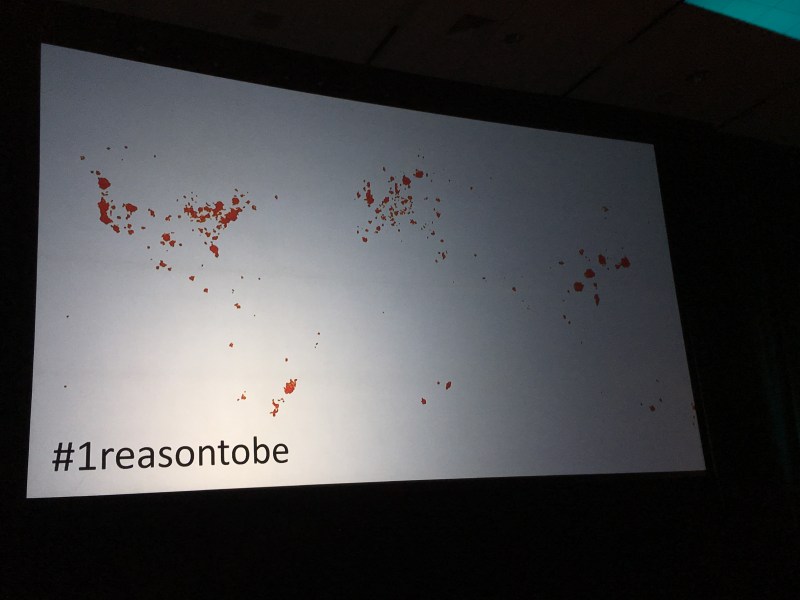 Above: The blank spaces on this map of represent countries with no attendees because of factors like cost and visa rejections.

It’s especially hurtful because Ismail says that, generally speaking, applicants don’t get a reason for why they’ve been rejected for a visa. And the decision could be for the smallest detail. For instance, one of the speakers was rejected because she had changed her last name in the past year because of a marriage. To make matters worse, a visa rejection becomes a permanent part of the applicant’s file — which will make it even harder to apply for another one in the future.

But the #1ReasonToBe panel wasn’t simply about the difficulties. The speakers shared games that they’re currently developing or have developed — hard-won projects that required immense tenacity. Mathieu’s studio is currently working on Dahalo, a game that will showcase Madagascar’s culture. Rocha highlighted his award-winning title Cristales and upcoming title Haimrik. Noujaim showed off her studio’s VR game Highway Madness and talked about how passionate local developers are about their games and their country.

And cofounder of Jordanian publisher Play 3arabi Samer Abbas told the remarkable story of how he started hosting the yearly game jam Game Zanga. Developers from various countries participate in the event, traveling from places like Palestine, Qatar, Algeria, and Egypt. Accordingly, its themes reflected the values of the region. In 2012, at the height of the Arab Spring, developers created games around the theme “freedom.”

“In a way, as an industry, one of the most powerful things that #1ReasonToBe does for me is not so much bring people here,” said Ismail. “It’s that the people that are here go back with their knowledge and their contacts and their network and help further local industries back home.”

That’s a boon for the speakers who get to attend GDC. And as for what the industry, people can help pave the way for diverse creators by showing up, listening, and engaging. Moraru says that a number of folks approached her after the panel to offer help with future projects — as well ask for advice on their own games.

“Games are everywhere. Game development is everywhere,” said Ismail. “That evolution will move forward. But until that moment is reached, I think what we can do as an industry – and what the industry did, which I’m very thankful for – is show up in numbers, listen, acknowledge that these problems exist, and at the end of the panel I was glad to see a number of platform holders and engine representatives walk up to the stage to talk to some of our speakers and figure out ways to reach out.”