If you ever wanted to capture, relive, and share your favorite moment in a game, then Raptr‘s new gameplay capture service, Plays.tv, is for you.

The free service makes it easy to capture a 20-second video clip and upload it to a website so that you can share it with friends. Plays.tv is an interesting pivot for Raptr, which already has 46 million users for its PC game optimization service, and it has enabled the company to raise $14 million in additional funding from Advanced Micro Devices and existing investors.

Unlike constant gameplay video livestreaming services such as Twitch, Plays.tv isn’t targeted at the small percentage of gamers who are good at entertaining people for hours at a time. Instead, it focuses on the last 20 seconds or so that you played in a game.

“It’s like Instagram for gamers,” said Dennis Fong, the chief executive of Raptr, in an interview with GamesBeat at the company’s headquarters in Mountain View, Calif. “We make capturing those moments as easy as taking a screenshot.”

Above: Plays.tv celebrates the pro gamer in you.

Gamers often upload funny videos about glitches or big accomplishments to YouTube. But Fong said it’s hard to find anything that you really want on YouTube. By contrast, Plays.tv is just for gamers. And it enables people to follow their friends or discover the most-shared content on its front page.

“With Twitch, it’s like television,” Fong said. “You sit back and watch for hours at a time. We’re not that. We’re the opposite end of the spectrum.”

Fong noted that Twitch has more than 100 million monthly users, but only 1.5 million of those are broadcasting their own gameplay sessions. Average gamers aren’t really streaming.

Fong, who goes by the handle “Thresh,” was once one of the stars of the early e-sports scene, and he won a Ferrari by beating other contenders for being the best at playing Doom. But he doesn’t necessarily like talking while he’s playing, and doesn’t want to entertain fans for hours.

“I’m not a performer or entertainer who will ramble on for three hours,” Fong said. “But there are parts of my gaming life I want to memorialize, like playing Bloodborne and getting my butt handed to me over and over. I want people to empathize with me that it’s really hard.”

Most people simply don’t have the skills to be entertaining. On the other hand, just about everybody has that one moment when they feel like a pro because of some spectacular achievement in a game. Plays.tv is aimed at preserving those moments.

“Our tagline is that ‘we celebrate the pro in you,'” Fong said. 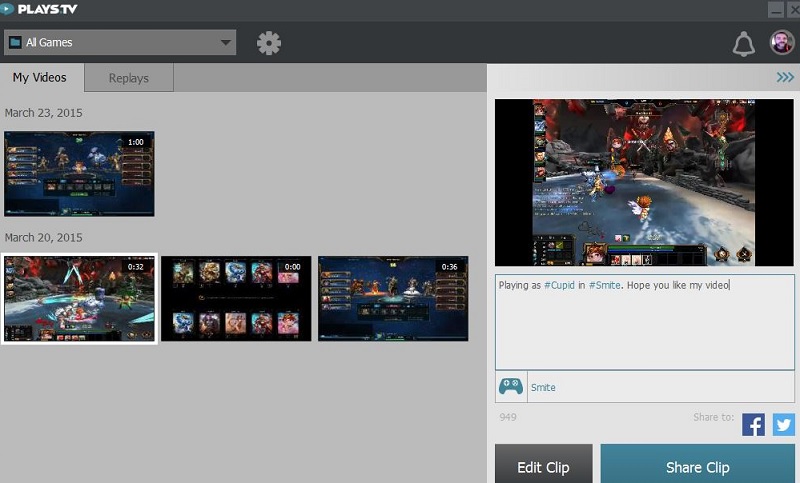 Above: Sharing screen in Plays.tv

You can post your epic victories, failures, or even glitches within games. Players can add voiceovers to the videos, making them a lot more fun to watch and share. 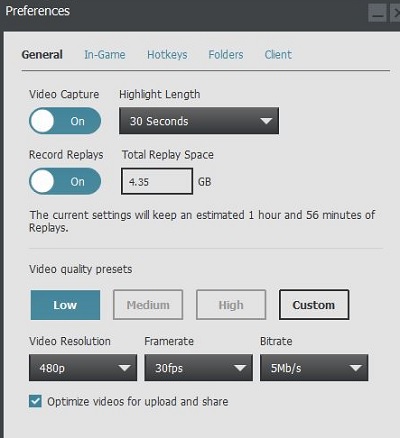 Plays.tv will be a stand-alone service and website, accessible from a PC or mobile devices. Raptr.com will continue to focus on making automated recommendations for configuring your PC to get the best possible performance in a game. The services will remain separate.

But the game video recording software is already live within Raptr. So Raptr users can use that video recording and post it on Plays.tv. And Plays.tv will be easily accessible to Raptr’s 46 million users. Players can also use other tools to record video and edit them, if they wish. The Plays.tv client can
optionally capture the user’s webcam (picture-in-picture) and can also automatically import videos
recorded using other software such as OBS, Raptr, and Nvidia’s Shadowplay for easy editing and sharing.

You can count on capturing the right moments because Plays.tv constantly records video in the background, up to 20 minutes worth. Whenever you have a moment you want to record, you hit the CTRL-F12 keys, and it records 20 seconds, or whatever preset time period you set. So you never have to lose a moment. You can also go back into the 20-minute cache and edit videos snippets from it. You can add hashtags, and that makes it discoverable by the entire community. You can also embed it.

“To me, chatting with my friends about all the funny and amazing things that happened in the game we just played is often as much fun as playing the game itself,” said Fong.

“At Team Dignitas, we’re always looking for new ways to engage with our fans,” said Michael O’Dell,
the managing director of e-sports group Team Dignitas, in a statement. “Plays.tv makes it super simple to capture highlight moments from our matches without the hassles of editing, and it’s awesome to have a dedicated community to share them with so our fans can relive those moments with us.”

The Plays.tv project started about nine months ago, after Raptr introduced its gameplay recording. It found a lot of people used the recording, but fewer than 1 percent of the people shared the videos even though it only took one click to post it to sites such as Facebook or Twitter.

That was because those communities were not focused on gaming, and videos rarely grabbed a lot of interest after they were posted. So Raptr decided to create its own community of hardcore game fans around the videos. You can still post to other social networks.

“We asked people, and they said they didn’t feel comfortable sharing their gaming lives on Facebook, and YouTube is not really a community,” Fong said. “That was why we decided to create this. It’s a service that is extremely easy to use. The client is very lightweight.” 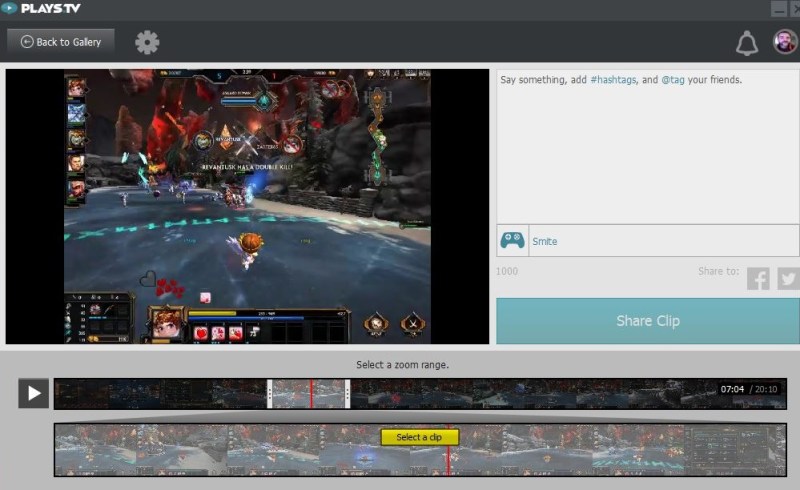 In testing Plays.tv with 1 percent of the Raptr audience, Raptr found that members are embracing the service and becoming very active. Players are picking up followers and following other people who post fun videos. And the videos are getting lots of views, Fong said.

The videos can be modified to be longer, but the default setting is for 20-second video clips. That isn’t as big a burden for Raptr to store in its servers as other video applications, like long Twitch streams. Still, Fong anticipates people will do a lot of recording and sharing. The new round of money will help pay for an expected surge in video hosting costs.

Over time, Raptr expects to monetize Plays.tv through video advertising, which has become particularly popular in the modern gaming era. Raptr uses hardware-accelerated video encoding, which records video without having a huge impact on a game’s performance.

The service is available today as an open beta test. It works with any PC game, and gameplay from more than 750 PC games has already been posted.

Raptr can expose videos to larger audiences with its editor’s picks, trending topics, and the most popular videos.

Raptr was founded in 2007 and is backed by investors Accel Partners, Founder’s Fund, DAG Ventures, and Tenaya Capital. All of those investors participated in the latest round. Raptr has 50 employees.