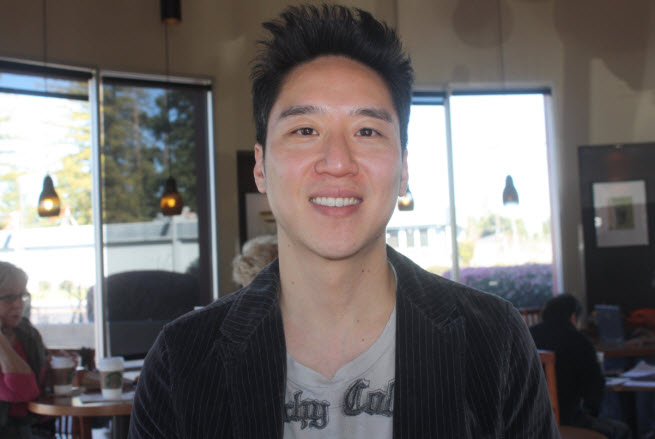 Gamers of the world, get ready to brag! Raptr, the social network for hardcore gamers, is launching a new reputation system for its 12 million monthly active users.

The idea is to create a ranking system based on how much users play games, how many achievements they accrue, and other precise measurements. By being the best player at a certain game, a Raptr member can unlock rewards from retailers and game publishing partners. Raptr will be able to identify the world’s top Max Payne 3 player or the most dedicated World of Warcraft player, said Dennis Fong, chief executive of Raptr in an interview with VentureBeat. And at some point, the reputation system will generate revenue for Raptr.

“We are trying to measure what someone’s reputation is in the industry,” Fong said. “We can look at how influential they are. And then you can use that as a building block for everything you do in Raptr.”

So far, Fong is trying to take a page out of the playbook of Mark Zuckerberg from Facebook’s early days: Fong is trying to amass a critical number of users before he turns on any monetization. (The companies share an investor in Accel Partners.) It costs nothing to join the gamer social network and there are no ads on the site except some occasional experiments. Back in September, Raptr had only 1 million monthly active users and now it has surpassed 12 times amount that in just five months.

But the reputation system and the rewards that come with it are a path to making money. Fong said that Raptr is testing its own rewards at the moment where it will give goods from its own pocket to gamers for reaching the highest achievements in games. But at some point, sponsors such as retailers or game publishers will likely step in and pay to give rewards directly.

Game companies can figure out who early adopters are and target them with attention, after Raptr does the sorting work. And gamers can settle grudge matches by proving that they deserve cred when it comes to playing certain titles.

“We can partner with anyone or offer the rewards ourselves,” Fong said. “You could try to figure out what games will lead people to become gold members at GameStop. Our users win because they get more rewards.”

Fong said that Raptr is being careful to set up a good “gaming rep” system. The ranking system is per game; it’s not an aggregation of all of your activity. If you haven’t reached the rank of “amateur” in a game, then you aren’t allowed to write a review of it on Raptr. That will stop uninformed fan boys from trashing the ratings of games that are rivals to the ones they love.

“We want to be a place where your gaming rep matters,” Fong said. “Everything you do leverages your rep. If you reach a certain rep, you might unlock a 30 percent discount for downloadable content.”

With permission, the service already automatically imports all of the data associated with how much a gamer plays a game, such as how many levels they reach or how many they have climbed in multiplayer play in Battlefield 3. If others pass you by, you may drop into a lower rank for that particular game.

Raptr has a six-level system at the moment, from Newbie to Elite, and each level unlocks a new level of status for the gamer. Raptr profiles now give a complete picture of a user’s gaming persona, interests, expertise and achievements. That makes it easier to make friends with similar interests and capabilities, discover more content you might like, show off, and earn rewards. Raptr will share relevant content with a user based on their rank, progress, and recent activity. A Newbie will be shown strategy guides and FAQs, while an Elite may see the best community-curated “machinima” (game animated) videos.

The profiles will have a percentile ranking system that tracks a user’s hours and achievements and compares them with the rest of the community. Social leaderboards show how gamers stack up against friends. And the news feed will be personalized based on the ranking.

Since 2007, Raptr has raised more than $27 million in funding from investors Accel Partners, Founder’s Fund, DAG Ventures, and Tenaya Capital. Rivals include Activision Blizzard’s Call of Duty Elite and a number of other gamer social networks, but Raptr has more members than any of them, Fong said. 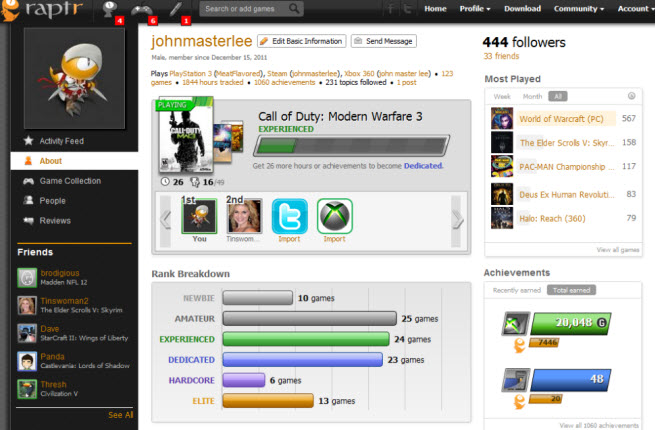