Razer wants to light up your keyboard, your mouse, and now your ears as well.

The hardware company has jumped into the wireless audio-headset space with its new $170 Man O’War unit. This headset features 7.1 surround-sound, a retractable microphone, and Chroma lighting, and it works on PC and PlayStation 4. Razer has given it a lightweight design while also claiming it can last for 20 hours if you turn off the lighting effects. That’s an attractive list of specs for the price, and it all translates into an excellent user experience.

When talking about the experience of using a PC gaming headset, the most important aspect to me is comfort. I want something that I can wear for hours at a time without feeling serious strain. With the Man O’ War, I was surprised that I had no problem wearing them for marathon Overwatch and Doom sessions. I even played Uncharted 4 well into the night using Razer’s wireless headset without any discomfort.

The big thing here is that Man O’ War headset is light. It packs great sounds and long-lasting batteries, but that doesn’t mean you’re carrying around a 2 lbs with your neck. Instead, these are only 0.83 lbs (375 grams).

Now, if you pick them up off your desk, that feathery mass can make the Razer unit feel a bit plasticy and cheap, but that’s not something you’ll notice when they’re on your head. On my large melon, they held tight and provided a ton of comfort, which is what I want more than something that feels like it’s using the highest-grade materials.

Other design decisions include putting all of the controls on the back of each headphone. You can quickly adjust the volume of either your microphone or your speakers with the twist of a dial. You can also mute those devices by pushing the dials in. Razer even brilliantly created a storage nook for the wireless dongle so that you won’t lose it when you’re on the go.

Sound is great and mic gets the job done

I love that I feel comfortable wearing the Man O’ War headset for hours at a time because it has really nice sound. It uses Razer’s virtual 7.1 surround-sound software, which you can calibrate whenever you want in Razer’s Synapse app. I found I was able to pinpoint approaching enemies in games like Overwatch without issue thanks to this feature.

I typically use a pair of Sony studio monitoring headphones, and I was surprised that high-end audio sounded richer on Razer’s device while the bass was on par in terms of its fullness.

The microphone, meanwhile, is great for communicating with your friends online. You’re not gonna want to record voice-over audio for videos with the Man O’ War, but it’s so easy to use that you may find yourself talking more during your online gaming sessions. That’s because the microphone is easily retractable, so you can get it out of your way when you’re not using it. It’s ready to go after a quick tug. Having the mute button on the back of your headphone is also convenient. I can turn off push-to-talk and instead use the on-board muting functionality to avoid breathing in people’s ears. Razer’s software also shows you your mic volume level and whether or not you’re muted.

Razer has talked a lot about how long the Man O’ War headset will last without charging. The company has said that it’ll last a week, but that’s based on two hours of gaming per night. I think the better number to look at is 14 hours with the Chroma lighting turned on. That kinda shows you what it’s capable of under heavy use, and I’ve found that is a really long time. I’ve only ever had the headset die on me once, and that’s only after I left it off the charger for about five days. 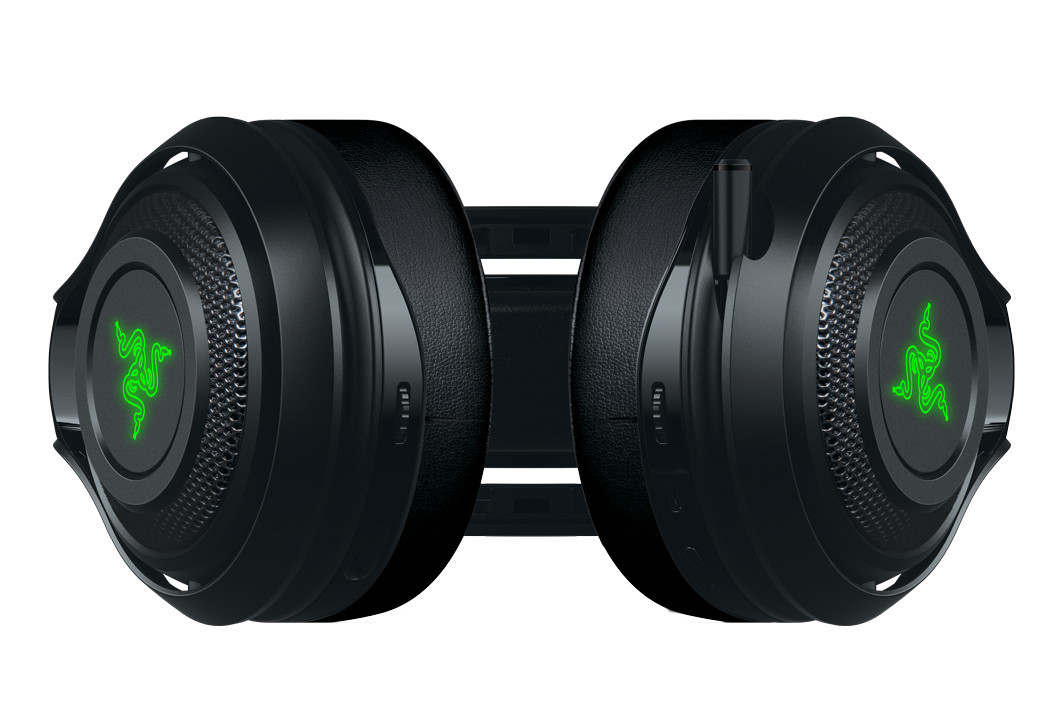 Above: Its buttons are easy to get to and manipulate.

It takes a bit too long to turn back on

Since this is a wireless headset, Razer puts a lot of emphasis on saving battery life. It turns off by itself if you don’t have any audio playing for a period of time. That’s frustrating, but I get it. I just wish that it turned back on without me having to hold down the power button for 5 seconds. That’s a real distraction.

I wish I could use them on more devices

I like the Man O’ War a ton, but I wish it worked with the Xbox One or my smartphone. It doesn’t have an option to use it as a 3.5mm headset or with bluetooth. It only connects to its dongle. This isn’t uncommon for these kinds of headsets, but I wish Razer would’ve at least included bluetooth support because I’d love to use this as my primary headphones for listening to podcasts and music — especially since I could take phone calls with the microphone.

Should you buy it or consider something else?

I recommend the Razer ManO’War if you’re specifically looking for a wireless headset solution for your PC-gaming setup. If you can deal with a wire, you might want to consider something like the HyperX Cloud. That’s less expensive, and it works with more devices thanks to its 3.5mm jack.

But if you are sick of getting tangled in cables, which is something that drives me crazy, the ManO’War is great. In the $180 price range, the only other real competitor is Logitech’s G933 Artemis Spectrum, which I think is ugly and the battery doesn’t last as long. Astro has some wireless headsets, but they’re $300, and — again — I prefer the look of the ManO’War.

So, yes, Razer’s wireless headset is easy to recommend with the caveat that you’ll get a better sound-to-dollar ratio if you go with a wire.

Razer provided GamesBeat with a pair of Man O’ War headsets for the purpose of this review.