This article may contain spoilers for Grand Theft Auto V.

Read+Watch+Listen is about other material you might want to check out if you’re just not ready to move on. We’ll suggest media that share something in common with a particular game and tell you why it might be of interest. In this installment, we’re going to build on your experience with the latest entry in developer Rockstar’s open-world crime franchise, out now on PlayStation 3 and Xbox 360.

If you couldn’t get enough of: Heist-driven drama.

Director Michael Mann’s 1995 epic stars Robert De Niro as a brilliant bank robber and Al Pacino as the equally clever cop trying to catch him. It’s a fascinating, character-driven film that includes several memorable action sequences, including this one that might look familiar to GTA V fans:

That’s right: The game’s third heist, Blitz Play, is almost an exact copy of the opening scene from this movie.

Heat is a character-driven, endlessly fascinating film with an all-star cast and a cops-and-robbers story in which both sides are completely defined and equally sympathetic. It was also a heavy influence for director Christopher Nolan’s The Dark Knight, so that’s pretty cool, too.

If you couldn’t get enough of: Creative police evasion.

This is another crime film, but it’s completely different. Director Nicolas Winding Refn’s equally slick and violent movie tells the story of an unnamed getaway driver/Hollywood stuntman/mechanic (Ryan Gosling) who finds himself stuck with the genre-standard Giant Sack of Dangerous People’s Money. But that’s not the relevant part.

The first seven minutes of Drive can stand as its own short film in which the driver works his stuff after a nighttime robbery. He has to evade the police several times, and his tactics include simple fast driving, hiding under freeways, and driving directly behind a police car.

All of these maneuvers work in GTA V. Even, theoretically, the tailgating one, because the in-game officers only search in a cone directly in front of them. So when you watch that sequence, you can consider it educational.

If you couldn’t get enough of: Michael De Santa’s dysfunctional home life. 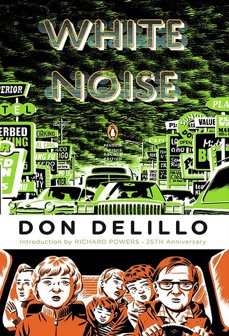 Don DeLillo’s postmodern 1985 novel is about Jack Gladney, a college professor who is famous for inventing the field of “Hitler Studies” but hasn’t even bothered to learn the German language. He’s a sad, washed-up phony who suffers a year-long crisis of identity as he struggles to understand who he is, what he’s doing, and how to relate to his increasingly estranged family.

Does that remind you of anyone? You know, only substituting “bank robber” for “Hitler expert”?

Gladney’s awkward and repeated attempts to connect with his wife and children, which include  a visit to The Most Photographed Barn in America and a lot of musing about morality thanks to exposure to an Airborne Toxic Event. It’s a little more heady than Michael’s bike races and highway yacht chases, but equally hapless.

The Who Sell Out

If you couldn’t get enough of: GTA’s satirical radio entertainment.

The Who Sell Out, the 1967 album from the guys responsible for Anne Margret’s bean and chocolate-fueled meltdown, alternates between songs and bizarre ads and fake public-service announcements. GTA players who like to just cruise around Los Santos in someone else’s car and listen to the music and commercials might want to check out The Who’s offering.

It’s a concept album in which the music, rather than telling a story like their later projects Tommy and Quadrophenia, re-creates the experience of listening to a pirate radio station. it’s a tongue-in-cheek parody of both materialism and the band’s own forays into advertising.

And the music is really good, too.

I haven’t read, watched, and listened to everything, obviously. Do you have another piece of media that goes with Grand Theft Auto V? Feel free to share in the comments. And be sure to check out the other entries in this series here.