This article may contain spoilers for Bloodborne.

You spent years waiting for developers to hurry up and release a big game. You buy it, take it home, and play through it in a couple of days. Or a few weeks, in this case, because this game is really challenging. Regardless, it’s awesome.

Read+Watch+Listen is about other material you might want to check out if you’re just not ready to move on. We’ll suggest media that share something in common with a particular game and tell you why it might be of interest. This time, we’re taking on Bloodborne, which is out now for PlayStation 4.

If you couldn’t get enough of: Monster hunters in a world both Gothic and cruel.

Vampire Hunter D is a series of 26 novels (so far) by Japanese writer Hideyuki Kikuchi, but if you don’t want to track all of those down, it’s also spawned two animated movies: 1985’s Vampire Hunter D and 2000’s Bloodlust.

The premise is …. simple, maybe? The story takes place around the year 12,090 C.E., 10,000 years after a nuclear war wiped out most of civilization. The eponymous half-human, half-vampire monster slayer roves the postapocalyptic countryside in search of beasts in need of killing and fits in with neither human nor vampire society, kind of like Marvel superhero Blade but several times more Japanese.

If you’re a fan of Bloodborne, that’s pretty much all you need to know, but D also has a weird, symbiotic face living in his left hand and rides a robot horse.

OK, so it’s not that simple after all, but the series combines westerns, science fiction, Gothic horror, fantasy, and straight-up magic and somehow makes it all work really well.

‘In the Mouth of Madness’

If you couldn’t get enough of: cursed townsfolk and eldritch horrors.

Director John Carpenter’s 1994 tribute to the work of weird-horror pioneer H.P. Lovecraft is one of the few films based on the writer’s work that is actually watchable.

Sam Neill (Jurassic Park) stars as an insurance investigator (wait; it gets more exciting) looking into the disappearance of novelist Sutter Kane (Jürgen Prochnow from Dune). The case leads Neill to a small New Hampshire village, where the people are a little bit off due to the rising influence of an ancient and evil god emerging underneath the weird, Byzantine cathedral outside of town.

Things just kind of escalate from there.

Above: The first rule of Lovecraft: Never read anything.

Fans of Bloodborne will recognize and appreciate the cosmic horror both the game and movie share, and In the Mouth of Madness is one of those frankly insane films that somehow manages to stay on track while getting increasingly strange. It might even change how you feel about the color blue.

‘The Shadow over Innsmouth’ audiobook

If you couldn’t get enough of: Cosmic horror and Great Old Ones.

And if you still don’t have your fill of Lovecraft or doomed towns, here’s a little bit of audio magic that will take care of that for you.

The Shadow over Innsmouth (1936) tells the story of a hapless narrator who stumbles into a Massachusetts town that just happens to house a cult of “fish-frog creatures,” half-spawn of humans and the aquatic Deep Ones, ancient and terrible beings who live beneath the sea.

I’ve recommended Lovecraft stories in previous installments, and text is still the best way to take them in. But if you’re already familiar with the novella and want a cool, different take on it, check out the audiobook version below:

Keen-eared gamers might recognize the reader as Wayne June, who provides the narration in indie role-playing game Darkest Dungeon.

This Tumblr page and a huge book about Gothic architecture

If you couldn’t get enough of: Flying buttresses, pointed arches, and gargoyles. Gargoyles for days. 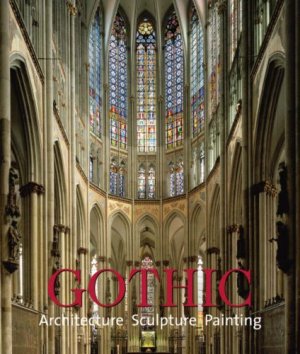 Bloodborne’s visual style draws heavily from the Gothic tradition, which was never intended to be quite so gloomy, but vampires have a way of ruining nice things for everybody.

And if you love the game’s foreboding towers and want to see the real works that inspired them, I have a couple things for you to check out. First, the excitedly named Tumblr page F Yeah Gothic Architecture includes a wealth of photographs and drawings of some of the most impressive buildings in the world.

If you’re looking for more historical context, check out the 520-page tome Gothic: Architecture, Sculpture, Painting. In addition to pretty, pretty pictures, the book also includes essays from experts who walk you through almost three centuries of beautiful art.

I haven’t read, watched, and listened to everything, obviously. Do you have another piece of media that goes with Bloodborne? Feel free to share in the comments. And be sure to check out the other entries in this series here.