This article may contain spoilers for Saints Row: Gat Out of Hell.

Read+Watch+Listen is about other material you might want to check out if you’re just not ready to move on. We’ll suggest media that share something in common with a particular game and tell you why it might be of interest. This time, we’re building on the infernal Saints Row expansion Gat Out of Hell, which is out now for PlayStation 4, Xbox One, PS3, Xbox 360, and PC.

If you couldn’t get enough of: adventures in the underworld and the seven deadly sins.

Sure, this pick is a bit obvious, but then again, the Saints Row franchise has never been known for its subtlety. Remember that this is a series that includes weaponized sex toys and side missions that have you spraying raw sewage all over people’s houses.

The first part of Dante Alighieri’s Divine Comedy is all about what happens to bad people after they die. And I’ll spoil it a little here: It’s mostly bad news. 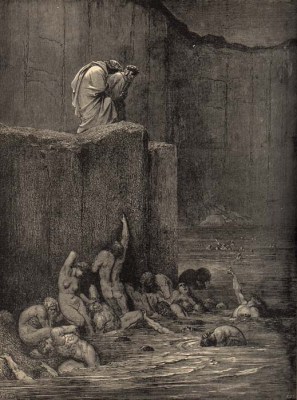 Above: Dante is not messing around here.

The epic and nightmarish vision of Satan’s backyard is full of torment, torture, and the a-hole demons who make it all happen. You’ll marvel at such ironic punishments as the Forest of Suicides, in which people who take their own lives are turned into trees and repeatedly ripped apart by insane animals, and the horrible Second Pouch of Malebolge, which, like the Flatterers who wallow in it, is completely full of shit.

So Saints Row is not alone in its love of poop jokes, and the poem’s additional catalog and description of deadly sins gives you some context for Gat Out of Hell’s seven special weapons based on Envy, Pride, Greed, Lust, Sloth, Wrath, and Gluttony.

If you couldn’t get enough of: cavorting with a motley band of historical figures.

Saints Row IV gives our heroes a new friend and narrator: 19th-century English author Jane Austen, whom the game’s villain had captured and frozen on a time-spanning abduction spree before he destroyed Earth.

Gat Out of Hell adds a few more familiar allies, who fit into the world with the slightly less ridiculous explanation that they are dead and in the underworld. On your journey through New Hades, you meet Blackbeard, Vlad the Impaler, and William Shakespeare, and they give Johnny and Kinzie elemental powers because it’s Saints Row, and why wouldn’t they?

And if you want to see a movie that’s basically that same setup, check out Keanu Reeves’ career-best performance in 1989’s Bill & Ted’s Excellent Adventure. If you haven’t seen it, it’s about two losers whose rock band will eventually create a peaceful and harmonious society — provided they don’t fail History. If that happens, Ted (Reeves) will have to go to military school, and then nobody gets to live in a crystal.

Above: And this also won’t happen. Whatever the hell it is.

They get help from a traveler from the future (George Carlin) who lends them a time-hopping phone booth. The two heroes use their not-TARDIS to temporarily kidnap people like Socrates, Joan of Arc, Billy the Kid, and Abraham Lincoln so that the real historical folks can do the report for them. And that’s technically cheating, but if you follow the movie past its premise, it has you for good.

If you couldn’t get enough of: Gat Out of Hell’s hilarious, Disney-esque musical number.

“When I Find Love” is a song that Jezebel, Satan’s daughter in Gat Out of Hell, sings about her controlling father and desire to escape from her arranged life. It’s a song as pretty as it is humorously overblown, and if you want a few more theatrical songs to chuckle at, check out the below playlist. It has a singing Satan, some crass puppets, and Angela Lansbury. Because certain legal obligations demand that I include Angela Lansbury whenever I possibly can.

Tracks 5 through 8 of this playlist are varying levels of not safe for work, so headphones are probably a good idea.

I haven’t read, watched, and listened to everything, obviously. Do you have another piece of media that goes with Gat Out of Hell? Feel free to share in the comments. And be sure to check out the other entries in this series here.