Ready At Dawn Studios broke a lot of “rules” about virtual reality with its Lone Echo game and its multiplayer companion Echo Arena. For one, it’s a high movement game, where you are constantly going from one place to another, like soccer players running up and down a field. Most VR experiences don’t do this because it can make the player sick.

But the design team figured out how to get you to move without getting sick, mainly by getting you to grab things and use your own physical movements to propel yourself forward in zero gravity, said Ru Weerasuriya, president and creative director of Ready At Dawn Studios, in an interview.

That’s what the company has learned from two years of development work. The science fiction VR experience — particularly Echo Arena — is like a blend of the Tron and Ender’s Game films. Lone Echo is a single-player game where you play a robot who is assisting astronauts on a deep space mission, with much of the action taking place in zero gravity. Echo Arena, meanwhile, is a 5-versus-5 multiplayer game where you move through zero gravity and try to get a disc into the opponent’s goal. It involves a lot of coordination and shouting over voice-over-Internet.

I’ve played it twice now in preview sessions, and a lot of fun. You can twist and gyrate as you move through zero gravity, and even punch your opponents in the face as you pursue the disc. The game studio is building Lone Echo and Echo Arena as an exclusive for the Oculus Rift and Touch. I sat down with Weerasuriya to talk about the design.

Here’s an edited transcript of our interview. The title doesn’t have a release date yet, but it will debut later this year. 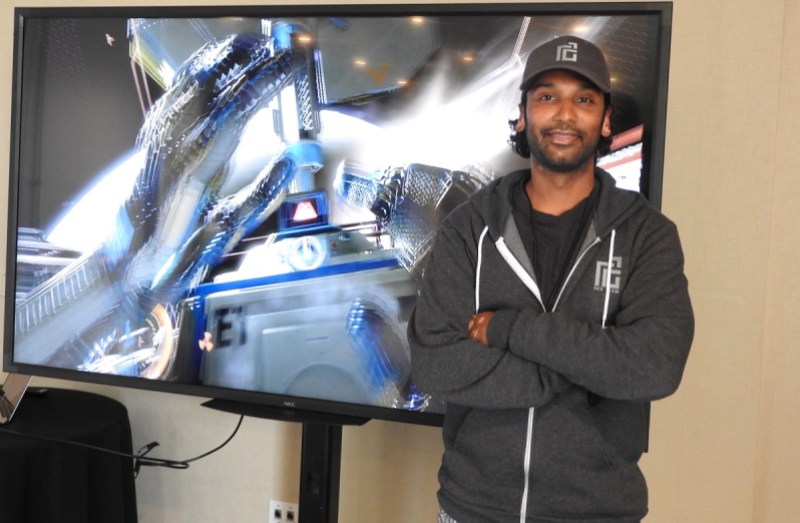 Above: Ru Weerasuriya, founder, president, and creative director at Ready At Dawn Studios.

Ru Weerasuriya: Just about two years now. One thing we learned early on is to approach VR as if there are no rules. There were a lot of rules set up at the very beginning to push people in certain directions, which is good at the onset, but we decided to veer away from that because we didn’t know how everything would work. It was a question of looking at boundaries and deciding whether they were solvable or not.

It started with the movement model, figuring out a way to make people comfortable moving in VR. Then we worked on the social aspect. We’ve learned that a lot of things we knew about game design don’t apply anymore. It’s a cool place to be, especially after all this time making games.

GamesBeat: How do people come up to speed, from what you’ve watched so far? How do they learn and start to master it?

Weerasuriya: For some people it’s very intuitive. They get it as soon as they start and understand how to get into it. A lot of others are the opposite. They have to get the hang of it and slowly ramp up. But consistently—we’ve been following players all the way through in focus tests. We’ve seen that everybody has gotten to a level where they were comfortable in VR, comfortable with the motion, and could play a full game. They’ve always been impactful to the team. They could find their role inside the team, whether they wanted to be an enforcer or a goalie or whatever.

We’ve seen people master the game, and beyond that, we’ve seen this other group of people master something that is far beyond. They’ve developed tactics that—I mean, I’ve seen some players, after just a few matches, do things that others take a month to learn. The interesting thing is that we’ve seen that skill range develop very widely across everyone who’s played. 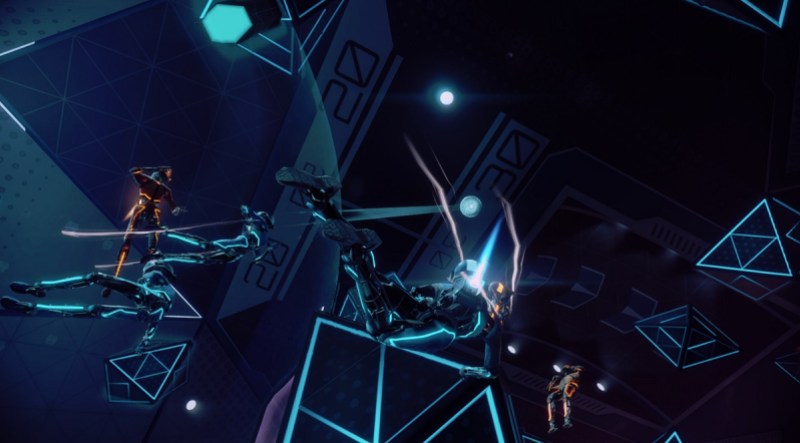 GamesBeat: I found that you have to pay close attention to the controls. A lot of forethought has to go into it. There’s a one-to-one relation between what you do and what happens.

Weerasuriya: Right. You don’t expect that from the start. You have to get accustomed to the controls.

GamesBeat: There were moments where I’d reach for a disc, miss it, and almost feel like I was playing baseball. “Shoot, I missed my chance, it’s going into the outfield.” But in reality I can hit the brakes and go back to catch it really quickly. You have to learn new kinds of movements.

Weerasuriya: We’ve seen players do that. As you say, you have to get accustomed to the controls, but what we’ve seen is that certain players gravitate toward certain controls and certain things they can do. They’d pick up a role in the team that goes directly with their comfort zone. Some people are amazing at monkey-barring. They have really fast reflexes. Every single one of those guys that I’ve seen becomes a goalie. They hang around on the big ring, and when the ball comes they get it and throw it out. Being a goalie matters, because you personally score points for being a goalie, if not for the team.

Some people who are enforcers, on the other hand, all they do is fly around really fast and just punch people and disable them. It’s awesome to see that.

GamesBeat: But you had to design it so the goalie can’t stop everything.

Weerasuriya: Right. There are ways to get around them. A goalie can’t cover that whole area. Or you can run up and punch the goalie. Some people will wait down there and do it as a team effort, where one guy charges in to punch the goalie while the other guy throws it in. We’re seeing some really cool tactics building up.

Weerasuriya: Yeah! The best part is that with voice over IP, you don’t even need to be next to a person. You can yell halfway across the world and it works just fine. There’s a very good camaraderie building around the game. 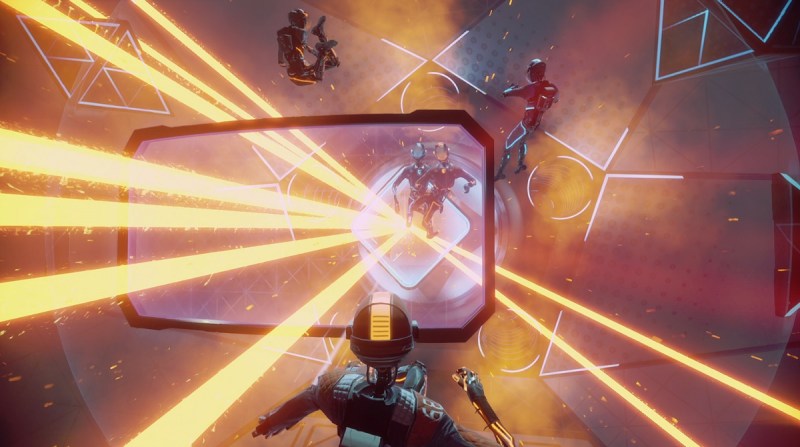 GamesBeat: It seems like there’s a lot of tech in here you had to create to facilitate things like that.

Weerasuriya: It’s an awful lot. We started out with the tech we had when we finished The Order. Everything built up from there. Rendering, all of that stuff, is the same engine. It’s a lot of the same technology. But this is our first foray into multiplayer. Whenever we see a new challenge, it’s good to know that we’re adding to what we know already.

GamesBeat: It feels like it has potential as an esport.

Weerasuriya: Absolutely. It feeds into a competitive tendency. It lends itself to becoming a sport. It will be interesting to see how players and the community react, because that’s always tricky. You put it out there and you wait and see how players attach themselves to it. If they like it and they need support on that side, we’ll provide it. We’re looking forward to seeing their reaction when it comes out.

GamesBeat: Could you work something out with someone like VReal and add spectator support at some point?

Weerasuriya: We actually added a spectator mode internally, because we wanted to be able to watch the matches ourselves. We needed to be able to observe playtests, so from there we started thinking about how we’d want to watch a match, how we could tell what’s going on. So we have a type of spectator mode, but if we were to do something like that for the public, it would take more work. If players ask for it, we’ll definitely do more work on that side.

GamesBeat: Does it wind up feeling similar to something like Ender’s Game?

Weerasuriya: Similar and different. There’s still the combat aspect in both. But the disc mode, the sport mode, the way that functions is a mix of Ender’s Game meets meets Tron meets ultimate Frisbee meets a bunch of other sports. It leverages everything we wanted to do – the tactile movement, the social elements, the competitive side. All of that turned into this one thing. It’s great to get inspiration from so many other things, but it’s its own thing once you start playing. 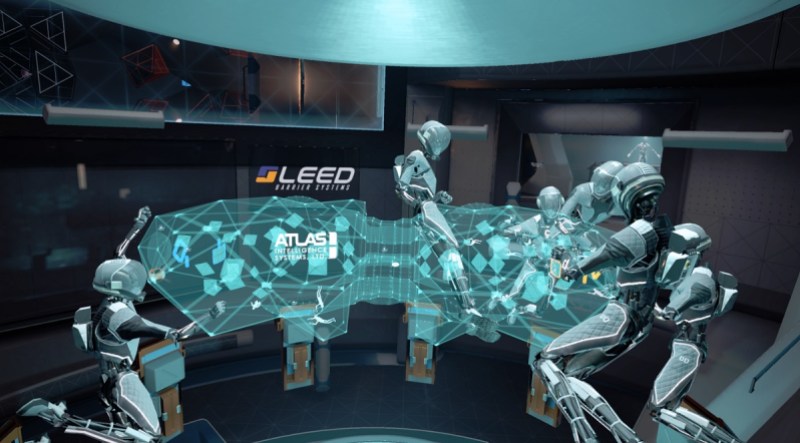 GamesBeat: Does the Lone Echo fiction come into Echo Arena in any way?

Weerasuriya: The characters you’re playing are part of that fiction, of course. You play as one of the androids in Lone Echo. It’s set in the same universe. It’s a game that would be played in the Lone Echo time and universe, something people would watch there. You’re playing the game in all these different places around Earth and across the solar system. We wanted to link it up so it felt like part of the same world.

GamesBeat: Can you change things up to play a different kind of game, like capture the flag?

Weerasuriya: That would be cool, wouldn’t it? There’s definitely room for new things to go in there. If it leverages all the stuff we want to leverage, we definitely want to see if there’s room for things like that.

GamesBeat: What else do you have left to accomplish before you get the game out?

Weerasuriya: We have a lot of things left to do on the game side. We want to make sure that stat tracking works. The social lobby has a lot more work left to go. On the Lone Echo side, we still have stories to complete, and some of the interactions between the characters and the NPCs. Some of the missions are left to be done. Some of the art is left to be done. Everything’s building out. We’re getting close. The work is never really done. We’ll always be striving to do more and more. But we’re getting close to release. I’m looking forward to putting it out.

GamesBeat: Are you seeing any similar games on the market?

Weerasuriya: Not yet. The movement model took us a long time just by itself. Replicating that, coming up with similar things, is something I’m sure other people are going to try to do. But I haven’t seen anyone do it yet – not in the way it functions, not in the way it leverages a lot of possibilities in VR.