Reality Fighters is misleading from the start. I’ve yet to meet a Bavarian giant in the English countryside or stumble across a murderous ballerina on the way to the Taj Mahal. I’ve very rarely had to box an Irishman next to Chinese ruins (although there was that one time outside The Forbidden City…). Rather than offering a realistic fight as the name suggests, Sony’s PlayStation Vita augmented-reality fighting game does the complete opposite.

So where does the “reality” come in? From you, actually. Using the Vita’s camera, you can shoot the world around you to create stages for one-on-one battles. Alleys, living rooms, playgrounds, offices…if you can photograph it, you can beat someone down on it.

You can also attach a photo of your face to a generic body that you can manipulate in many different ways. If you’ve ever wanted to see yourself as an overweight member of the opposite sex, the time is now. To add some audible personality to your onscreen fighter, you can record two sound clips, one for before and one for after the fight. These features showcase Vita’s capabilities quite well and offer a few chortles along your character’s journey. 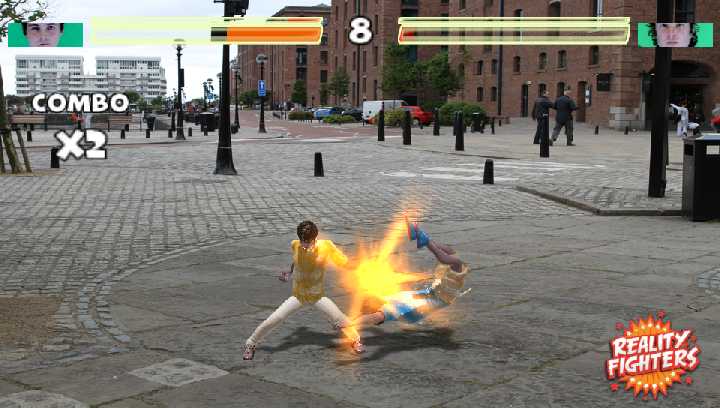 Each fight offers up coins, which unlock an array of different costumes and quirky props. Most of these are available quickly, giving the game limited longevity. After a few minutes tinkling with your appearance, the novelty wears thin. From here, the lightheartedness in character creation starts to become less infectious.

You can make up for that, however, by getting adventurous with the background stages. Before each contest, the game instructs you to pick your location of choice. Plenty of pre-existing destinations are available, including stereotypical settings from Asia, America, and Europe. These grow old quickly, though, so it’s more fun to utilize Vita’s rear camera to create your own battle arenas. They don’t even need to be static. If duty calls, you can walk around with each conflict overlaying your active, ever-changing surroundings (like the back of that bathroom stall door).

Lighting plays a huge part in the quality of custom areas. Expect Vita to struggle when the room is too dark, losing focus of the on-screen shenanigans. While the default levels are well-produced and full of color, making your own leaves a lot to be desired. Sure, it’s cool to witness a topless magician tackling Santa Claus on the desk in your office, but the laughs can’t last forever.

Once they do stop, an extremely limited fighting game shows itself. Executing each move is too simple, meaning it’s easy to spam an opponent with the same special combo. Various fighting styles are on offer, but they poorly mimic iconic characters from other games. Boxers amount to nothing more than a knock-off version of Street Fighter’s Balrog, and capoeira artists jive back and forth like Tekken’s Eddie after a hernia operation. Regardless of style, the best tactic is to suffocate your enemy, forcing him into the corner of the screen with a barrage of similar attacks. Hardly a challenging prospect. 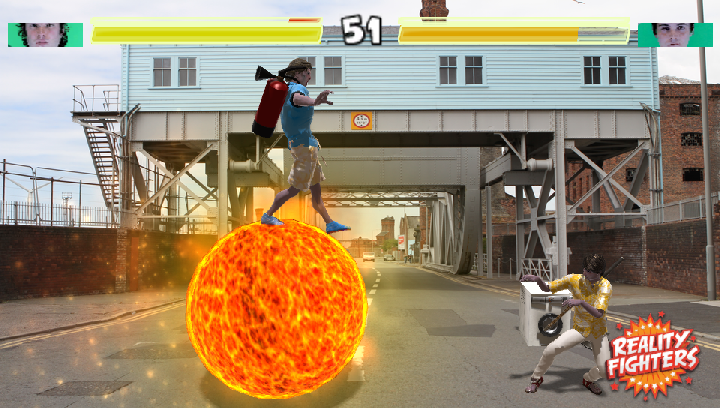 If there’s one thing fighting games need to nail, it’s hit detection. Too many times throughout my quest, I got hurt from a move that didn’t land properly. In particular, aerial assaults are prone to damage when they shouldn’t. Expect to get caught up when the overweight German contender slams his gut into the ground, even if the commotion sails over your head. Zombie types also serve up a fair amount of frustration, randomly grabbing you from underground. A lack of interesting commands ensures Reality Fighters is a shallow and forgettable experience, even with the addition of weapons after 30 minutes of play.

Sony designed this game around the ambition to show off Vita’s augmented reality, a decision that backfires. Just like Little Deviants, this easily could have been a free incentive to those who buy the new handheld. Reality Fighters is a missed opportunity, and despite its sense of humor, amounts to nothing more than a boxed tech-demo. Score: 50/100

Reality Kings was released for the PlayStation Vita on February 15, 2012. A copy of the game was provided by the publisher for the purpose of the review.