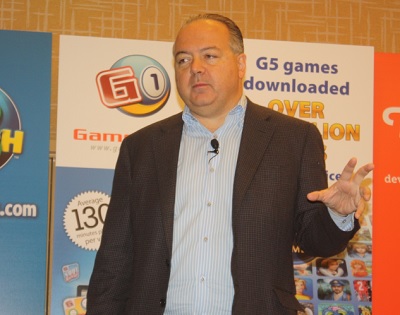 It’s not clear what this means for Zynga, which has a partnership with Slingo on a Facebook version of the popular Slingo game. Slingo also operates its own games on Slingo.com. The Slingo-Zynga game on Facebook has 4.5 million monthly players.

Slingo is a 17-year-old, amazingly popular game on the web, and it is even on slot machines in casinos. But it was never on Facebook until Zynga launched its Zynga Slingo game last year.

In a story last year, GamesBeat noted that consumers have spent more than $1 billion on Slingo it during its history. Players have downloaded tens of millions of Slingo games and played those titles over billions of times.

Slingo was established in 1995 and was owned by Sal Falciglia. In a video, Falciglia recounted how he created the game during his 60s by thinking about two favorite pastimes: slot machines and bingo. He conceived Slingo in his head and played it over and over again.

“We are thrilled to have acquired Slingo, one of the most beloved products and brands in social casino gaming,” Glaser said. “We look forward to bringing Slingo – an extremely fun combination of slots and bingo – to even more fans around the world. Our team is hard at work creating even more compelling new versions of Slingo for Facebook, iPhone, iPad and Android.”

“Slingo has been a successful, compelling product on every major games platform over the past 15 years,” said Slingo CEO Rich Roberts. “By joining forces with RealNetworks, we look forward to taking Slingo to the next level. We’re thrilled to be joining RealNetworks’ GameHouse division.”

Glaser made the announcement at the Casual Connect game conference in San Francisco. The deal will help the company set its brand apart in both the $5.5 billion social casino game business and the larger $35 billion real-money gambling market. But he doesn’t view gambling as a panacea for the overcrowded casino game sector. RealNetworks’ GameHouse Casino Plus game now has a Slingo minigame within it.

“Last week, when Zynga pulled out of real-money gambling, that was consistent with our view that this is going to proceed slowly,” Glaser said.