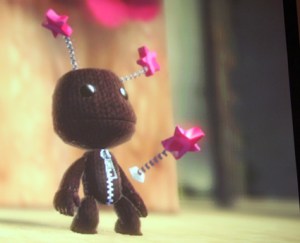 Sony has been touting LittleBigPlanet as one of its biggest holiday release titles. But the company announced it would delay the worldwide launch, which had been scheduled for Oct. 24, because one of the background music tracks in the game might be offensive to Muslims.

The company’s European games division put out a statement that said that the music, licensed from a record label, has “two expressions that can be found in the Qur’an.” It also apologizes for any offense. I’ve actually got a finished copy of the game and so it’s clear that Sony had already been moving ahead with manufacturing of disks for the launch. Now it will have to create new disks without the music.

That’s a big setback for Sony. The game promises to be a mass market hit because of its appeal to both hardcore and casual gamers. It isn’t clear when the new disks will be ready for launch. The game has the very high rank of 94.5 percent on GameRankings.com, which aggregates review scores (the press gets the game ahead of the launch and so the reviews are up). That’s the highest ranked recent game on the list.

The game features cute little ragdoll characters who team together to solve problems in a side-scrolling adventure. But users can modify the scenery, and it has a unique, realistic art style. It reminds me more of a classic Nintendo title, though the visuals are far more realistic and stunning than Nintendo games.

Update: Sony says the launch is going to be in the week of Oct. 27. The delay is not too serious.