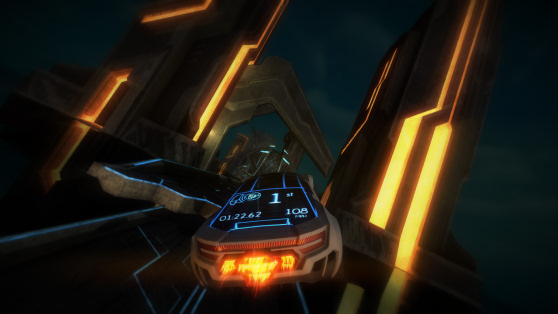 Being part of an independent studio doesn’t mean letting go of big ideas. One team is challenging the distinctions between indie and triple-A game quality in its approach to development.

“Compared to other indie devs, I’d say that, mentality-wise, we find ourselves more like a larger indie studio. But in execution, we’re very much a small team,” Refract Studios’ chief executive officer Jordan Hemenway told GamesBeat. 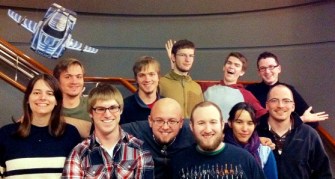 The 11-person Refract team got its start when three DigiPen Institute of Technology graduates worked on one hit game: Nitronic Rush, an “experimental survival driving game” available for PC as a free download online. The three founders — Jason Nollan, the physics/gameplay programmer on Nitronic Rush; Kyle Holdwick, the producer and gameplay programmer; and Hemenway, the composer, sound designer, and public relations person — are now collaborating with a new team on a new project, a spiritual successor called Distance.

“One of our biggest goals at Refract is to push the boundaries of what it means to be game,” said Hemenway. “Most of the games we’ve done in the past were a lot more abstract and experimental, and when starting the company, we were planning on doing something much more along those lines. What made us turn around back toward another racing game was the chance to innovate on atmosphere and the world design within an action-driven context.”

To understand what inspires Distance, you have to look at its predecessor. Nitronic Rush has achieved over 700,000 downloads and 1.1 million play sessions thanks to the team’s efforts to push press coverage and foster a community around the game. But what exactly makes it so popular with players? The team has given that question a lot of thought, and Hemenway admits that the catchy design probably helped, among other factors. 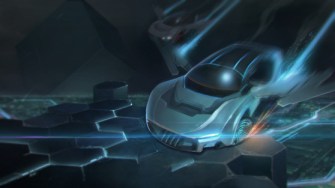 “I think that vehicles by their very nature are pretty universally understood, and we tried our best to not have the game rely on any certain cultural bias or understanding,” he said. “According to our analytics, the U.S. only comprises about a third of our players, which really showed us that the work we put into marketing the game was nothing compared to power of people sharing it via word of mouth.”

Nitronic Rush originated as the group’s junior year project at DigiPen. Hemenway says they conducted a playtest almost every week and were able to use academic licenses for the software needed to create the game, which eliminated cost as a potential obstacle. After 17 months of development, they shipped the first version on Nov. 11, 2011. Since then, they’ve released four huge content updates for free.

But just because it was a class assignment doesn’t mean Nitronic Rush is the work of amateurs. “All of us graduated with a ‘B.S. in Computer Science in Real-Time Interactive Simulation’ degree, which is about intense as it sounds,” said Hemenway. “The majority of our projects at DigiPen were required to be built from scratch, so we’ve had incredible practice building everything from low-level graphics engines to various high-level tools.” Now, they’re learning to use powerful tools like Unity’s premade engine.

Hemenway said the teachers at DigiPen encourage students to keep working on a game and submit it to the Indie Game Challenge and Independent Games Festival competitions. The team’s five full-time members contributed 30 hours to 40 hours a week to the project on top of their 15 credits of classes. Their dedication shows: Nitronic Rush is this year’s Indie Game Challenge Winner for the Gamer’s Choice Award, an Independent Games Festival Honorable Mention for both Technical Excellence and Student Showcase, and an Independent Propeller Awards Finalist in three categories, among other acknowledgments. 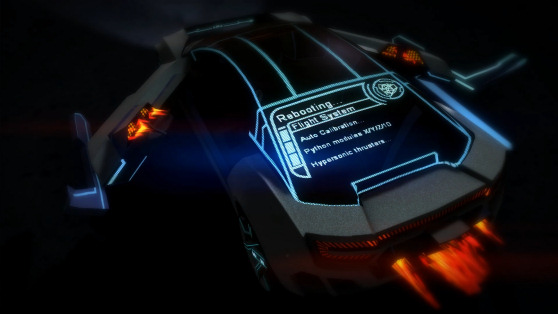 The result is what the team calls an experimental survival driving game — a label designed to get people playing without seeing the words “racing game” and automatically thinking triple-A. “We ended up using that terminology because we wanted to properly set expectations for players before they played the game,” said Hemenway. “We were concerned that calling it specifically a racing game could be troublesome since many people would expect a full-fledged triple-A racing game instead of our smaller but more experimental game. We also used the term ‘survival driving’ instead of ‘racing,’ since there technically isn’t any racing between you and other opponents. The real focus is using your car’s capabilities to outmaneuver obstacles placed in your path.”

Nitronic Rush is similar to arcade racers like Wipeout and Rush 2049, but Refract Studios wants Distance to be that and more — combining elements of games like Limbo, Half-Life 2, and Halo. “From the beginning of Distance’s development, we [wanted] to draw on those inspirations to develop a world with a more mysterious purpose and function. It’s something we don’t often see in the racing genre, and we’ve had so much fun creating atmosphere-focused games like Solace and Solstice [as DigiPen students]. It’s a great chance to finally bring those undertones into a new context.”

Since Distance is the team’s first outing as Refract Studios, they want to build a strong audience before people even start playing. That means turning to Kickstarter. They’re aiming for a $125,000 funding goal.

“In many ways, I feel like we’re releasing the game since we’re putting together so much content from the beginning,” said Hemenway. “We’ve been developing a prototype for the past few months to see how much fun the game would be with multiplayer — as well as test the waters of using a premade engine — so we’re excited to finally show some of that gameplay.”

Refract also sought out other teams in their local Seattle area that had used Kickstarter and tried to learn from their successes — and failures. “Overall, there are lots of little things we’re doing to help, but we’re putting a lot of focus on being as transparent with consumers as possible while reaching out to those who’ve been so supportive in the past,” said Hemenway.

Rewards for backers include the standard fare — digital copies of the game, the soundtrack, posters, T-shirts, and in-game rewards like an exclusive car — as well as more distinct bonuses, like the chance to have a personal billboard or monument in the game world, own a completely custom vehicle of your choosing, or design a stunt for the car.

“Distance, in many ways, is taking what people loved in Nitronic Rush and cranking it up to the next level,” said Hemenway. “We’re keeping most of the core mechanics from Nitronic Rush intact, with the ability to boost, jump, rotate, and fly throughout the city. Several fan-requested features are now in place, such as LAN/online multiplayer, a powerful in-game level editor, several new game modes, and support for both PC and Mac.”

Working on Distance full time — as opposed to finding time for development in between classes, as they did with Nitronic Rush — means the team can ensure early on that different gameplay aspects work well together. This should lead to a more polished experience overall.

“We ended up doing some interesting experimentation in Nitronic Rush, where the music actually changed in accordance with how you used your abilities,” said Hemenway. “We also tied visuals to the audio in many parts of the level, where elements would pulse and move to the music to help connect [it] with the visuals of the world. Distance is very similar in that we’re dynamically mixing the musical and visual elements throughout the entire experience. Most of what we did with music experimentation in Nitronic Rush was done very near to the end of development, so this time we’re developing audio analysis tech early to push this part of the game even further.”

He added, “We’re also taking modes from the original game and rebuilding them in the new world. One of the most popular modes from Nitronic Rush was Hardcore mode, where you survive the track by traversing it parkour-style. It was something that we stumbled upon halfway through development of Nitronic Rush, but now we’re designing tracks and vehicles from the beginning to use it properly.”

Refract is currently targeting releases on PC and Mac, with the possibility of other platforms later on. Hemenway is looking optimistically toward the future, especially where indie games are concerned — and his studio seems to fit right in to that vision.

“A lot of changes are the on the horizon,” he said. “The void between $15 indie games and $60 triple-A games can’t last for long now that many indie teams are blurring the lines quality-wise. I’d imagine more teams will find themselves aiming for that gap and creating more innovative content on a grander scale. … Perhaps more [triple-A] studios will look at these small teams and start to incorporate their mentalities into their workflow.”