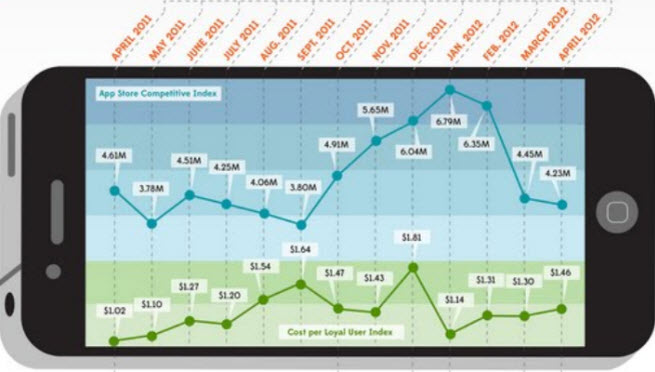 For much of this year, the number of downloads in the Apple App Store has dropped, and the cost of acquiring new users — the basic marketing that developers do in order to get people to buy apps or virtual goods — has been going up. But developers got a little relief in the month of May, according to indices tracked by mobile ad firm Fiksu.

The cost of acquiring a loyal user (one who opens an app three times) decreased 13.7 percent in May to $1.26 per user, compared to $1.46 per user in April. But the marketing costs are  still significantly above the $1.10 per user a year ago, according to Boston-based Fiksu.

When you figure that a lot of apps are free or cost only 99 cents, those are steep marketing costs. That means developers have to take a risk of spending money up front on marketing and advertising to get users. Then they have to hope that those users will spend money on virtual goods within the app over time, helping the developer to recoup those costs.

“In May, marketers began gearing up for the summer months which, historically, have presented increased opportunity for app promotion,” said Micah Adler, CEO, Fiksu.

“Yet amid concern around Apple’s speculated deprecation of UDID, compounded by a host of confusing alternative UDID-less tracking technologies, we observed inertia,” Adler said. “It appears that brands’ caution may have contributed to the dip in acquisition costs.”

In other words, there may have been a lull in the problem of constantly rising acquisition costs. Developers have been so concerned about that issue that we’re going to talk about it at our upcoming GamesBeat 2012 conference (see below). The panel will be moderated by Steve Peterson of GamesIndustry International. Panelists include Gabe Leydon, CEO of Machine Zone; A.J. Yeakel, mobile strategy consultant; and Rob Weber, co-founder of W3i.

Large advertising campaigns by Japanese mobile social game network companies DeNA and Gree have contributed to rates going up, said Weber at W3i. He also noted that the end of the UDID usage — without a good replacement — also may have reduced the effectiveness of ad campaigns during the period, causing inefficient marketing spending. Some efforts are under way to help deal with the inefficiency.

For the future, another force that may drive down user acquisition costs is the deep integration of Facebook into iOS with the new version of Apple’s mobile operating system. Facebook allows users to share games and apps with each other in a viral way. That means developers don’t have to spend as much on app marketing. At some point, that could offer relief for user acquisition.

Fiksu tracks more than 1 billion app events per day such as launches, registrations, and in-app purchases.