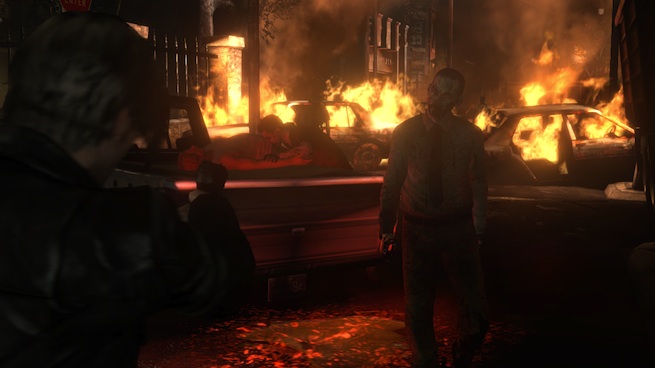 Zombies — the slow, shambling kind — have had enough. After sitting on the sidelines in favor of the Majinis and Ganados in previous entries of the survival-turned-action-horror franchise, Resident Evil’s old-fashioned zombies are finally gnawing their way back to the spotlight.

Developed by Capcom and set for release on October 2 for the Xbox 360 and the PlayStation 3, Resident Evil 6 sees the return of the zombies from its past, at least in one of the game’s three storyline campaigns (each of which feature online and offline cooperative modes) — the adventure of Leon S. Kennedy and his new partner, Helena. But within the first few minutes of playing Leon’s and Helena’s story, you find out that something is quite different with this undead horde.

And they’re not alone. Joining them is the J’avo, putrid creatures with gaping scars that can evolve into a variety of new forms, each more horrifying than the next. Due to the introduction of the C-virus, these bio-organic weapons are spreading around the world, and one of your main objectives in the game is to put a stop to it.

Here’s a look at what you can expect to see from both camps:

These are essentially the same sort of zombies infesting the Resident Evil games for the original PlayStation. But these hold one crucial (and frightening) twist: Some now lunge from several feet away. Nothing is more scary, or annoying, than seeing flying hunks of rotten flesh grab you from midair, forcing a timed button-prompt sequence to appear onscreen. In one scene set in a graveyard, the emaciated corpses resembled a gang of rotting children playing a game of leap frog. I could barely take two steps after shaking one off before another hurtled toward me, its jaws wide open.

Meanwhile, other standard zombies carry weapons. Zombies that were once policemen have guns, and they fire these off erratically from time to time; firefighters wield an ax, and they’re more than happy to show you how it works. Others have tools, like shovels, torches, and broken bottles with which to attack you. But you can use these weapons against them — thanks to RE6’s refined melee combat, you can counter their attacks by grabbing whatever weapon the zombie is carrying and use it to deliver a devastating one-hit kill. 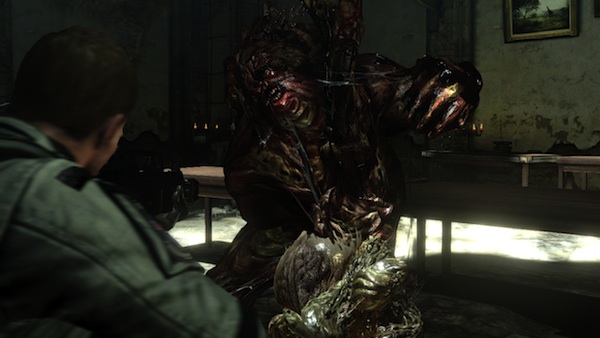 Next we have our two specialized varieties of zombies. One of them has a shiny white exoskeleton, and you must subdue it with a few well-placed shots in order to expose its beating heart; it will not die unless you shoot its vital organ. The other has a huge sack of necrotic flesh under its chin that swells up (much like a frog) as it inhales — and then it shouts, attempting to knock you down with sheer sonic force.

Individually, they are not much of a threat. The real challenge is when all of the different zombie variations converge in one area, which happened a lot during the first two chapters of Leon’s and Helena’s campaign.

The Transformers of Resident Evil’s bestiary, the J’avo can mutate into so many different forms that I gave up trying to count them all. You first encounter the vanilla-flavored J’avo who, aside from their grotesque set of eyes and scars, look like normal human beings; these can fire guns as well as, if not better, than anyone else on your team. They even take cover and attempt to flank you — Resident Evil 6 kind of plays like a standard third-person shooter when fighting against them.

A step above those mercenaries are the mutations. Sometimes, after taking damage, A J’avo can sprout a new arm or two, which are flexible enough to stretch and grab from long distances. From there, it gets crazy: The troops can develop armored legs, and they do their best to kick you to death; others have arms that turn into a giant shield; some look like bugs with long, beetle-like pincers from the torso up, and others sprout spider-like legs and crawl on ceilings. And one mutation is basically a human-sized version of Jurassic Park’s interpretation of the Dilophosaurus.

The J’avo can also transform into golden cocoons from which more monstrosities are born. The handsome fellow pictured above is just one variation you can expect; another includes what I can only describe as a huge, bloated fly.

The most terrifying of all is the Ustanak, a recurring enemy that seems almost impossible to kill. It isn’t his massive size or his incredible feats of strength that you’ll fear: It’s his right arm, which contains a wide assortment of blades and drills. You’ll want to run, not fight, whenever the Ustanak comes to visit.