Remasters get a bad rap these days.

When game makers revisit older material to rerelease it, they need to take care to ensure the updating process doesn’t mar the memories of the original. Sometimes they do too much, like with Capcom’s terrible 2D-to-3D transition of Bionic Commando. With others, they don’t do enough, as it was with Konami’s botched Silent Hill HD Collection, a remake of the second and third games of the series. The goal with remasters should be to rekindle old fans’ fondness while introducing the classic to new players, but many haven’t done this so well recently.

It’s nice to see that Capcom took great care with one of their most beloved classics, 1996 PlayStation game Resident Evil. It returns as Resident Evil HD Remaster, adding only the bare minimum to make it enjoyable on the latest consoles. This is a rare case of Capcom leaving well enough alone.

Capcom’s approach for Resident Evil was to leave the bulk of the gameplay experience intact and untouched — a wise choice. While survival-horror has changed considerably in the past two decades — with the focus as of late leaning more toward action and less toward exploration — one constant that the original helped establish is the feeling of being lost and weak. Resident Evil compares favorably to even the most recent games of the genre in this respect. While it might feel simplistic at first, this unchanged gameplay quickly draws you in, throwing you right into a situation that still manages to be nerve-wracking and scary. It was like coming home again.

One of the aspects that made the 1996 Resident Evil so great is its setting, the mansion that heroes Chris and Jill are out to explore. That same mansion is intact in this new version. The way it gradually reveals its mysteries and depth still holds up well today some two decades later. Even with some faint memories of what might be down a hallway or beyond a door, I still had a blast exploring rooms and solving puzzles again. For me, it’s just old enough for me to have forgotten about the fine details, essentially making it new again.

New controls for a new generation of gamers

Player demand has managed to push out the “tank” style controls from most survival-horror games, but Resident Evil HD Remaster keeps the option for those that would like to experience the gameplay in its original form. While those that cut their teeth on the earlier games should be fine with directional input remaining constant through camera changes, newer gamers might prefer the updated control option that has the character moving in the direction that the stick points. I prefer the classic controls, but I tried the latter for a bit for comparison’s sake. The updated controls are mostly fine, though it has some pretty confusing camera and scene changes that require some quick stick play to continue movement in the same direction. 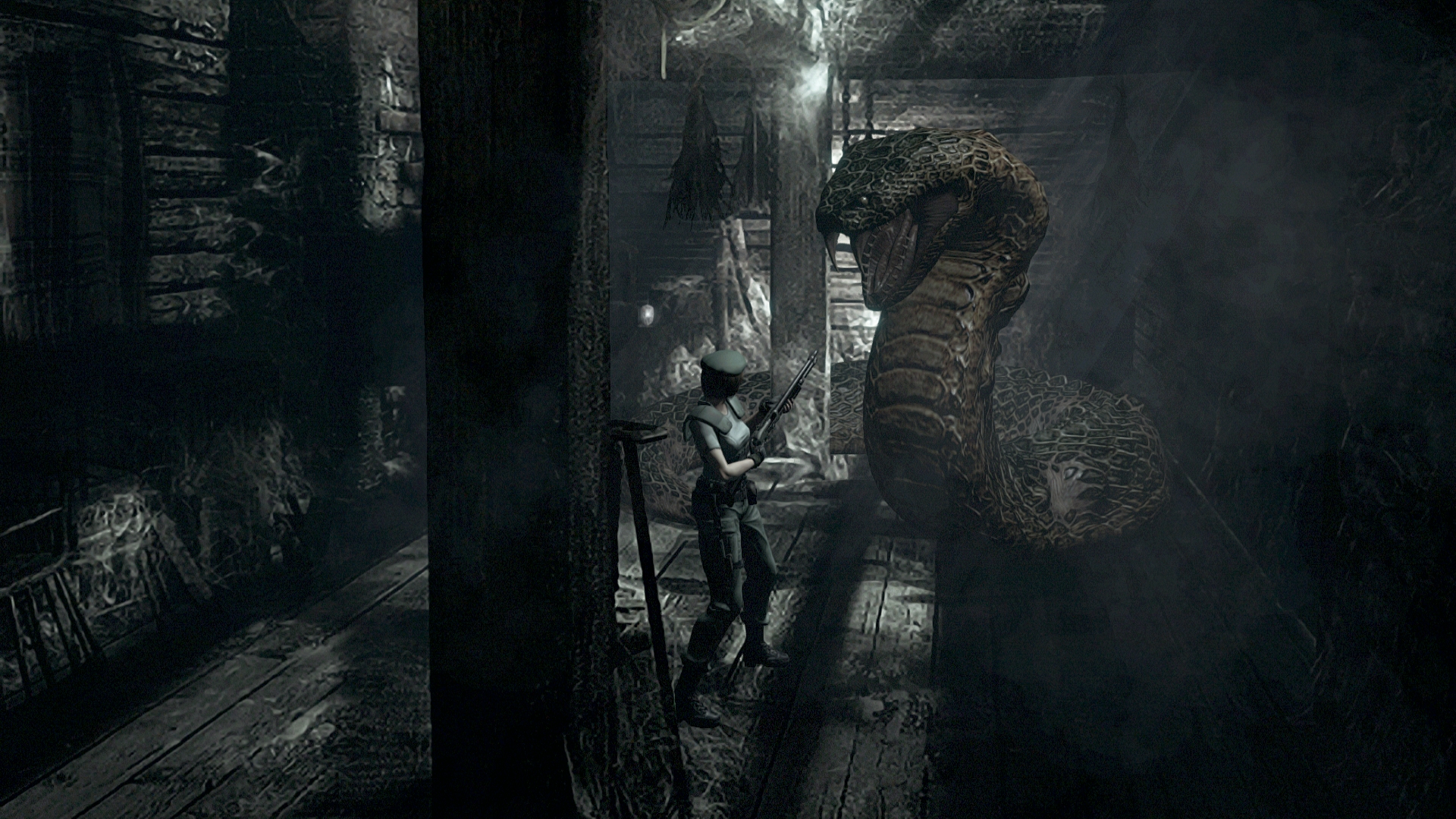 While the visuals of Resident Evil HD Remaster isn’t going to compare to the latest PS4 and Xbox One games, it looks great for a 19-year-old game, now sporting 1080p graphics on next-generation consoles. Main characters Chris and Jill look better than ever with their higher polygon models and higher resolution textures; a few of their closeup shots are especially easy on the eyes. Enemies also seem to have been upgraded a bit, though they look to have a bit less visual resources applied to them. They’re a bit rougher around the edges and don’t move as smoothly, but this sort of works; they’re zombies, after all.

With the visual update comes the addition of a widescreen option, letting you fill your television’s screen with the image. Switching between 16:9 and 4:3 formats certainly looks different, but it’s not enough to have an impact on gameplay. It plays absolutely fine either way.

Capcom did an outstanding job upscaling the original’s static backgrounds to HD resolution. Many of the mansion’s halls manage to feel both familiar and new at the same time with their increased detail and subtle atmospheric effects. It’s apparent that they took great care in making sure that the scenes maintained their original feel in the updating process, and it seems that just as much work went into making the 3D character and enemy models blend with these backgrounds. You can see and feel the respect for the source material.

Gameplay has not changed

Resident Evil fans looking for something new beyond the visual updates and new control schemes will be disappointed as this rerelease is true to its source. If you played the 2002 GameCube update, you’ve already seen it all as this remake is based on that version.

Gamers looking for modern-day third-person action won’t find much here. Sure, main characters Chris and Jill can fight back in a zombie encounter, but the combat is just as slow and soupy as it was back in 1996. Compared to modern standards, gunplay is basic, with rudimentary aiming and sluggish firing. 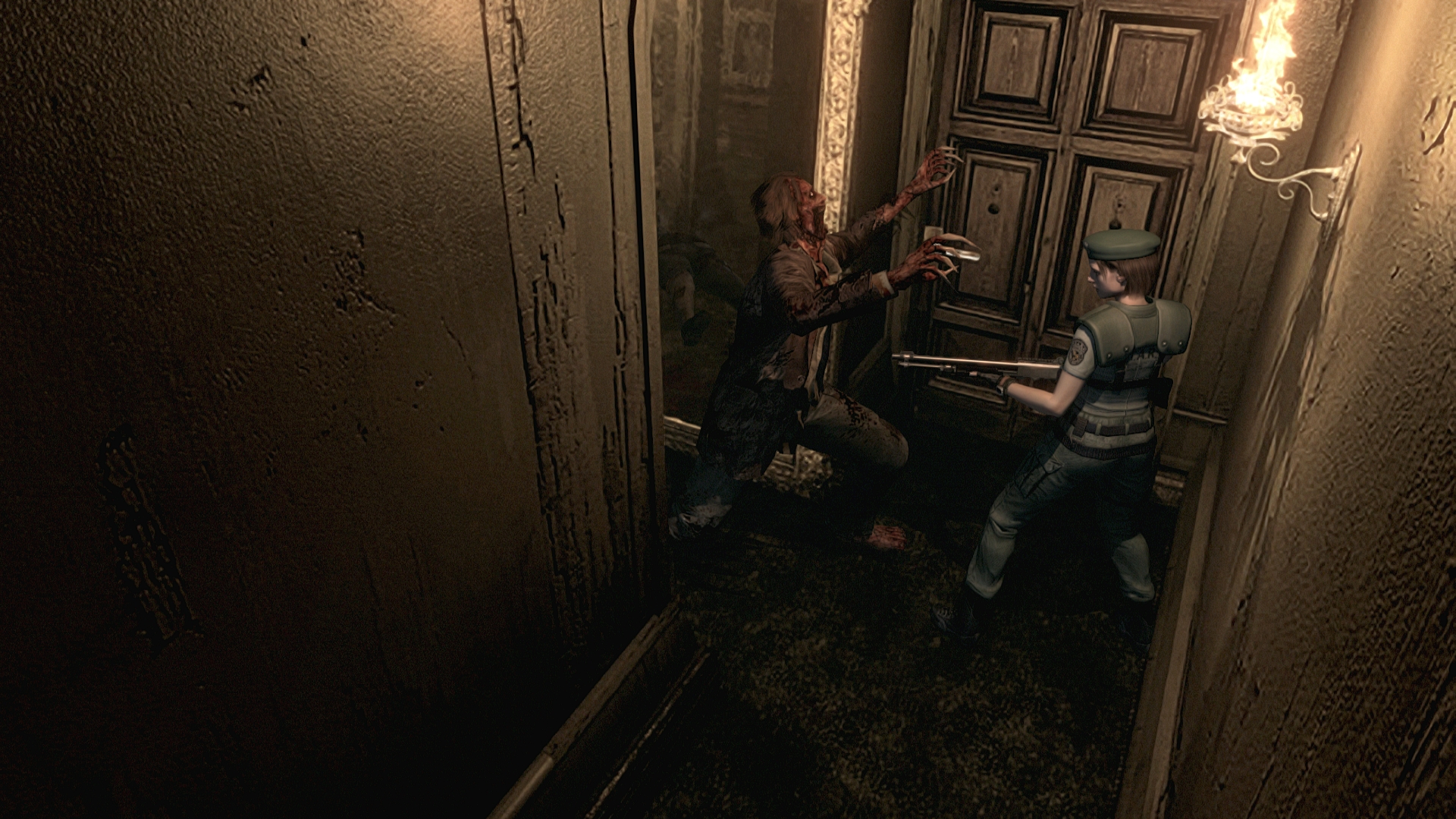 Above: This probably won’t end well.

Again, the oringial’s gameplay is still intact. This means that some of the old problems pop back up. Though infrequent, some cheap enemy placement brings about annoying damage, or worse, death. And I was reminded of the original’s collision problems when I found my gun sticking through a zombie’s chest and coming out his back. Firing the gun had the bullet going out its back, not injuring it at all. Collision problems also making picking up items a bit of a challenge in tight quarters.

It’s not all pretty

While he majority of the visual updating turned out great, a few scenes don’t fare as well as the others, with the dimmest areas looking the roughest. Some of the less important rooms didn’t get the love — they look stretched out and overly grainy, which contrasts greatly with the polished, well-lit marble hallways. But the more murky parts sort of play into the dark and grungy theme, so it works out.

I’m willing to bet that fellow survival-horror fans will be refreshed with this trip back to Raccoon City and the mansion that started it all. It still manages to be deep and suspenseful some two decades later, which is a testament to how skillfully crafted the original was. By keeping true to its roots, Resident Evil HD Remaster manages to strip away all of the superfluous additions we’ve seen piled on over the years, leaving only survival horror in its purest form.

Rushed re-do? Not at all. Capcom treated this classic with reverence, which is truly appreciated by this series fan.

Resident Evil HD Remaster is out on Jan. 20 for the PlayStation 4, Xbox One, and PC. The publisher provided GamesBeat with a PS4 and PC digital copies for this review.