My uncle died this morning.

The flu is a killer, especially when you’re in your elder years. He went into the emergency room this morning, and he didn’t come out, falling to a heart attack. A veteran of the U.S. Marine Corps, my uncle was someone whose perceived sternness terrified me as a child … until I got older and realized it was just an act, that he had a big heart and just didn’t know how to express his feelings.

In my 42 years, I’ve long known death. I’ve seen wisps of smoke seeping from under a blanket covering an elderly woman after she died in a house fire, her own cigarette the culprit for the blaze. My mother died when I was 7, killed in an accident with a logging truck. I watched my father die after struggling for life after a month in the hospital.

I cried while sitting next to my son, who was wired to IVs when he was 2. Thankfully, he lived, but seeing his small body hooked up to tubes is the most frightening thing I’ve ever seen.

I know the fear that comes from watching people die, the terror that you feel as you wonder if someone you love will leave this world. Against my life experience, Resident Evil VII never had a chance.

But as I played, I was taken with how well-crafted this adventure is and how well it’s going to resonate with those who love scares and the challenge of survival scenarios. Its puzzles are clever, and it shows the Japanese publisher is one of the best studios out there when it comes to crafting compelling worlds that players love (like with Monster Hunter and Dragon’s Dogma, two other excellent and well-designed games from Capcom).

I admire how Capcom crafted this world. It just doesn’t scare me. 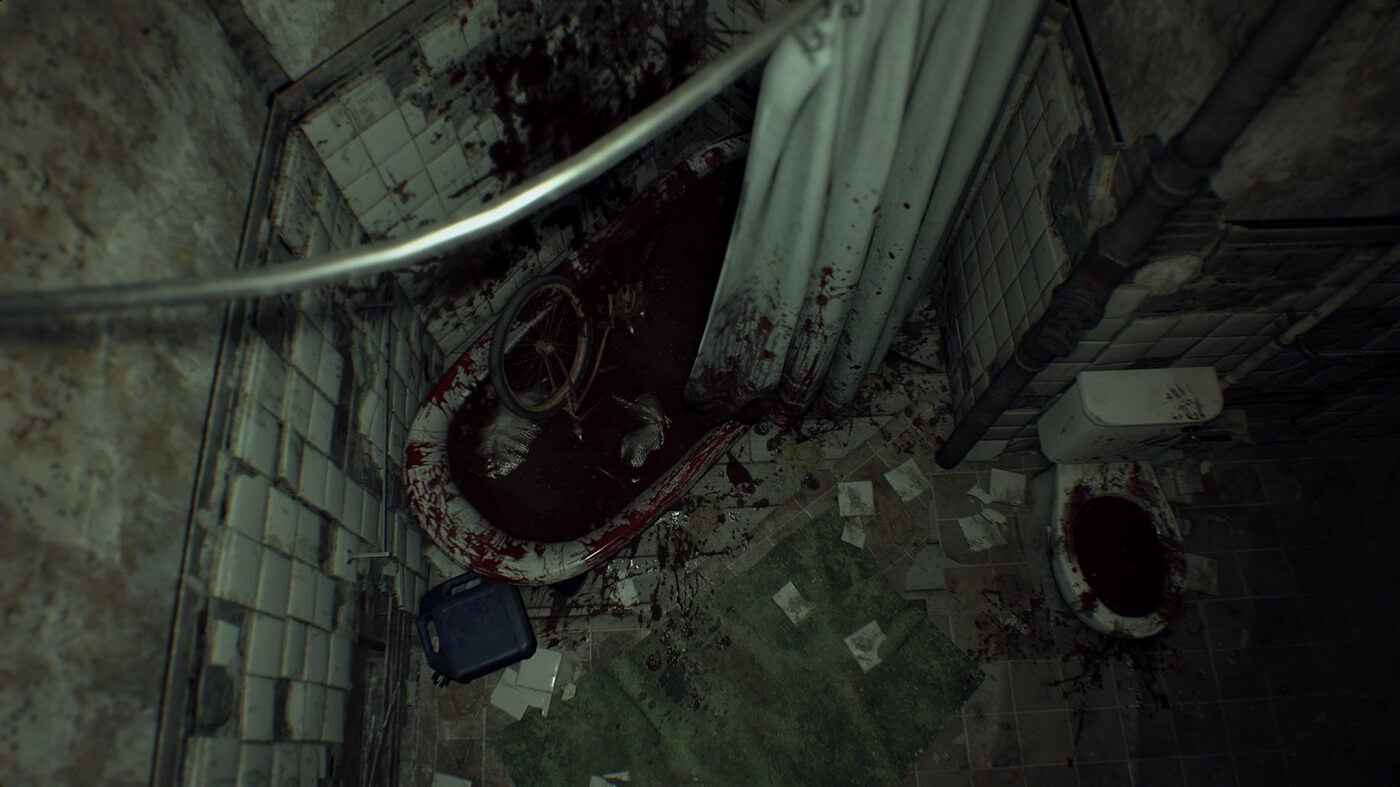 Above: I swear I’ve stayed in a hotel with this bathroom. …

Note: This contains some story spoilers.

Ethan Winters is a normal guy. He loves his girlfriend, Mia. But she vanishes in Louisiana. And that’s where the hero’s horror story begins.

Mia reaches out to her boyfriend after her disappearance, and Ethan heads to bayou country to find her. He arrives alone (why people in horror games don’t bring in more help, be it police or just a capable buddy with a shotgun, is so frustrating), and he’s not prepared. He carries a flashlight, and that’s about it, as he enters a house that looks like a refugee from the set of Deliverance.

Capcom does a fantastic job of creating a tense atmosphere inside this house, home to the Bakers (who turn out to be a group of murderous psychopaths), and much of this comes from the audio. Shutters smack the house. The floors creak. You can hear the home settling every now and then. Bugs skitter on the floor. The sound design team heightens the tension with each creak as you sneak through the house.

The visual design team did a top-notch job as well. While I’d like to think an abandoned, clean house might be scarier than this place, the heaps of garbage, broken tile, and rotting food do give you the creeps. The house looks as if a 4 year old and two puppies have been running all over it; its furniture is battered, with pieces of chairs, tables, and other filth littering the house.

Tension doesn’t just come from the broken home of the Baker Bunch. The lighting helps your exploration of the Baker abode — and what’s underneath — feel creepy as well. The designers have done excellent work playing with light and shadow, especially when someone is moving with a flashlight or a lantern. The light flickers off walls, warmly glowing, and even swinging along as someone carries it. I imagine the interplay between darkness and light is enough to frighten some players — it’s the best game since May’s excellent Doom reboot at balancing shadow and illumination.

Where the fantasy falls apart 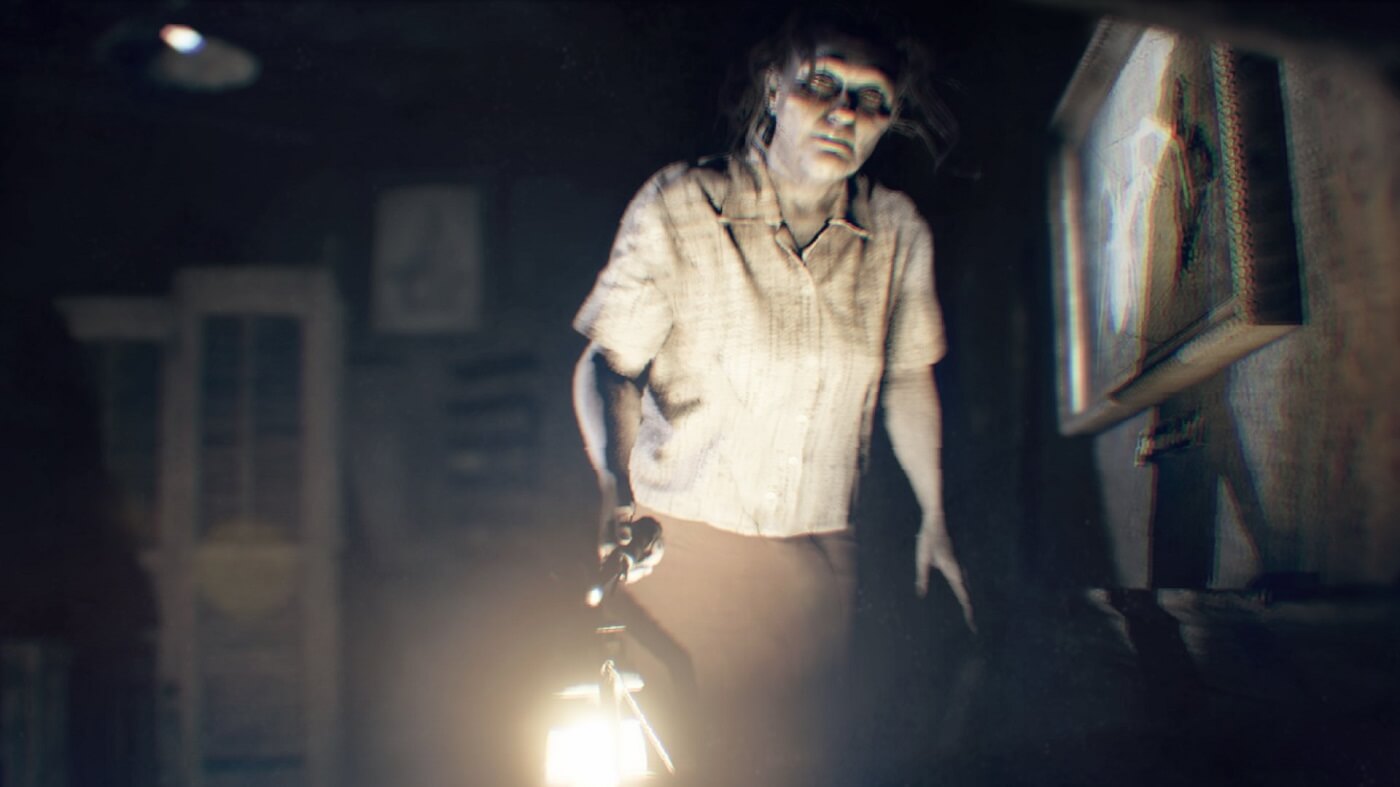 Above: Marguerite Baker chases after you with a lantern in hand, and the play of light and shadow during this scene is fantastic.

The light, the sound, and the visuals all weave a compelling case for building tension and creating a sense of unease.

And then Jack Baker appears.

He’s the patriarch of the Baker clan, and he’s an asshole, pure and simple. He’s a foul-mouthed bully, belittling his wife and son. He also likes to beat Ethan up. And it’s the first encounter with Jack in which the tension and unease builds into … frustration that has you swearing at the TV. Jack and his brood are cruel, ill-mannered, and unnaturally strong. He can lift Ethan up by the neck or slice through someone’s skull with a shovel. It’s this strength, this relentlessness, that could make Jack a frightening foe. Instead, he didn’t leave me scared — I just thought he was a frustrating pain in the ass.

You put a clip of bullets into him. He keeps coming. You slash him until he’s taken more hits than practice dummy at the martial arts gym down the street. He still swears at you and swings away. Hell, you even hit him with a car and set him on fire — and he still gets up! Even trolls succumb to fire. But Jack’s worse than any troll.

I get how this should build tension. An implacable foe, one that takes all your resources to fight, leaving every encounter a desperate pitched battle … until the beat returns for round two. This could be scary! But within the confines of Capcom’s design, it just comes across as frustrating. Why couldn’t I pick up that 2-by-4 full of nails? Wouldn’t that be a good weapon? Or that chain in the garage? But no. Because of the scant resources that’s a hallmark of “survival horror,” you can’t do this … even if it would make sense making use of such items to survive.

Capcom wants to make its villains like Jack Baker not just hard to beat but horrifying as well. The designers want them to scare you, to drain your hope. But they can be so overpowered that they just breed frustration, especially after I’ve dropped Jack a few times and still have to deal with his foul-mouthed ass as he stalks me around the house.

Because when I think about fear, my mind goes to that moment when I watched my father breath through a machine, hoping the fluid in his lungs would drain out and let him breath on his own. I think about to the little boy I was when I was in first grade, watching people talk about my mother in a mortuary while staring at her casket. I think about the rictus grin on my grandmother’s face as norovirus killed her in a nursing home. And I still shudder when I remember the IV tubes sticking out of my oldest son, laying on a gurney with a blue teddy bear that a nurse gave him to help comfort him.

There’s no way Resident Evil VII can match the fear of those moments.