Resident Evil Zero originally released for the Nintendo GameCube in 2002, and now, this overlooked entry in Capcom’s popular survival-horror series is back as an HD port for current systems.

The rerelease, entitled Resident Evil Zero HD, is out now for PlayStation 4 (reviewed), PlayStation 3, Xbox One, Xbox 360, and PC. These platforms allow for RE Zero to have upgraded graphics, widescreen support, and overall better sound, and they do a great job of reviving a nearly 15-year-old game that otherwise would’ve looked out of date. You can also now choose to use the classic tank-style controls (where you have to separately push up, left, right, and down to move) or an alternative, modern control scheme that lets you freely move in the direction you push on the analog stick.

RE Zero is a prequel to the first Resident Evil. It takes place a few years before the mansion incident, where protagonists Chris Redfield and Jill Valentine first fought Albert Wesker and a panoply of vicious monsters. In Zero, you assume the role of rookie S.T.A.R.S. member Rebecca Chambers and convict Billy Coen. After a violent train incident involving poisonous slugs, zombies, and zombie dogs, both Rebecca and Billy end up being trapped inside the train itself looking for answers and a way out.

Like most Resident Evil games, Zero’s story is laughably awful, with atrocious voice acting and cardboard characters to boot. But that’s just part of the charm. The real draw here is the emphasis on exploration, challenging and clever puzzles, varied locations, and beautiful art design. It’s also pretty scary at times, as the experience had me scream for my mommy on several occasions.

But I also yelled at my TV screen out of frustration with the few painfully outdated mechanics and designs.

Exploring and solving puzzles is enjoyable 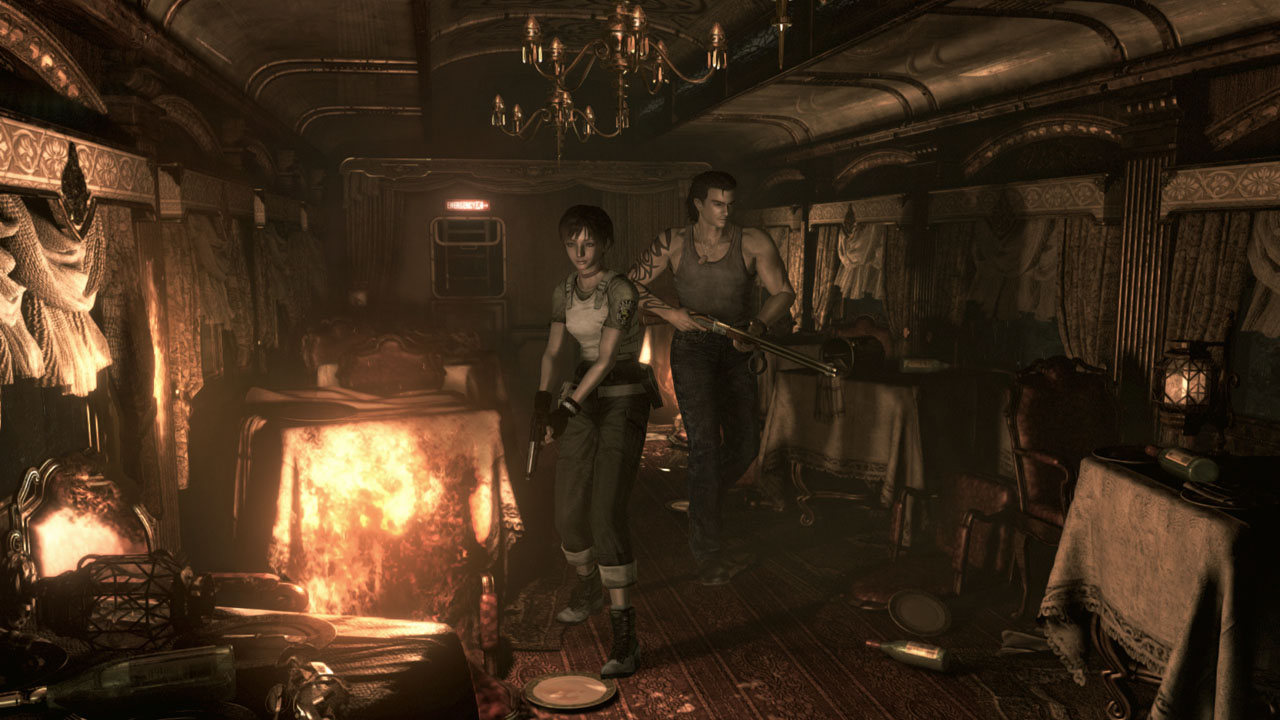 Above: Rebecca and Billy exploring a creepy train.

Yes, I played with the tank controls, and it took me quite a while getting used to them. But after finishing the game in roughly five-to-six hours, I found myself immediately wanting a similar gameplay experience.

You’ll be doing a lot of exploring in RE Zero. The journey forces you to trek back and forth to places you’ve already been in order to solve a puzzle or open a door you couldn’t access before. This gameplay design takes heavy inspiration from titles like Castlevania: Symphony of the Night and Super Metroid. The only difference is RE Zero is a 3D game rather than a 2D side-scroller.

I enjoyed constantly exploring and re-exploring the sprawling and interesting environments. The beginning train sequence, for example, is a well-designed level that feels different from the rest of the adventure. It’s claustrophobic, containing confined rooms and hallways. This makes avoiding enemies more difficult, but everything eventually opens up more with larger areas.

The many puzzles you’ll solve in these locations are mostly quite clever, and a lot of them make great use of the two-buddy system. You can control both Rebecca and Billy, and switching characters happens with the push of a button. In that sense, RE Zero becomes a cooperative experience. Most puzzles demand the best use of Rebecca and Billy to find the answer.

One puzzle had Billy trapped in a tiny room and Rebecca trying to find a certain item that would help him out. By the time I found that item, Rebecca was out of ammo and close to death. I quickly took over as Billy until another inevitable puzzle cropped up. It’s a well thought out gameplay mechanic for the most part, which is even better because of how smooth and fast it is to switch between the two leads.

Despite RE Zero being more than a decade old, Capcom has done a great job of reviving of it. The 1080p resolution and new widescreen format have made the game look quite pretty at times. Of course, the pre-rendered backgrounds also have a lot to do with that, as they come off looking like detailed, atmospheric paintings. Most games that sport pre-rendered environments usually age a lot better versus those fully set in 3D. 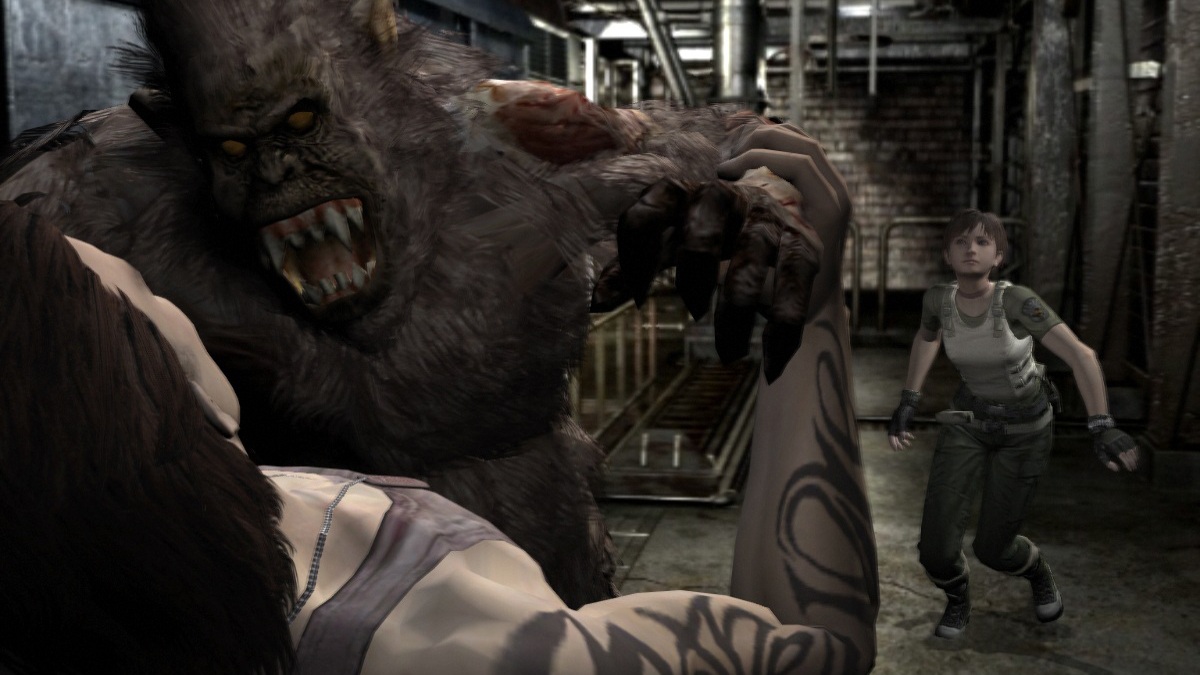 Above: You’ll face a gorilla!?

The enemy and character models also look decent. Some of the creatures you’ll battle are gruesome and disgusting in a good way. One of the first bosses I had to fight was some sort of giant zombie scorpion, and it looked great. I mean, for a zombie scorpion that is

Resource management is a must in RE Zero. Ammo is scarce. The game’s monsters are often much stronger than Rebecca and Billy. And you can only carry a limited amount of items at all times. Yes, this will definitely frustrate players at first. I died quite often in the beginning while playing on normal, but I eventually became comfortable with the way the game wanted me to play. I had to be patient, thoughtful, and methodical. I found the whole experience to be refreshingly challenging.

I had to always think twice about which items I wanted to drop and take with me, which weapons to give the two characters, and when to save my progress. Those precious ink ribbons are a rarity.

Both Rebecca and Billy have plenty of deadly weapons at their disposal, including shotguns and grenade launchers. Pointing and shooting at enemies, however, can definitely feel a bit awkward even without the tank controls. Since the title sports a fixed camera angle at all times, you often can’t see who, where, or what you’re pointing your gun at. Shooting and killing enemies doesn’t feel all too satisfying either.

Often, you’ll find yourself unable to avoid enemy attacks, and it takes way too long to down a baddie, resulting in cheap deaths. This is the one area where RE Zero fails to hold up, and it does make a case for why we don’t have games sporting fixed camera angles with tank-style controls anymore.

Even though the buddy system works well for puzzle solving, it’s a chore when it comes to combat and traversing. This is mainly because the game can end when the protagonist you aren’t controlling dies. The character A.I. is flawed, and it makes several stupid decisions and mistakes, which inevitably results in death. This frustratingly punishes you with a “game over” screen when it really isn’t your fault at all.

Allowing you to continue playing with the living character to revive the downed partner would easily fix this issue. Instead, at times, I had to replay large chunks of the game because Billy got mauled by a zombie dog while I was playing as Rebecca, and I had no chance to save my progress.

RE Zero is a great example of why old-school horror releases are beloved and special. With a few new technical upgrades, it has largely made a graceful return on current systems. The emphasis on resource management, exploration, and puzzle solving are enjoyable features I wish more modern horror games employed. But, RE Zero still isn’t without its flaws, especially with the way it handles combat.

Resident Evil Zero HD is now available on PlayStation 4, PlayStation 3, Xbox One, Xbox 360, and PC. Capcom provided GamesBeat with a review code of the game for the purposes of this review.