The indie market is increasingly full of games that more often resemble the stuff we played almost 30 years ago than newfangled products with their fancy polygons and highfalutin voice acting. This isn’t a new trend; retro-style games are easier to manage with limited budgets, and nostalgia is a powerful draw.

And because one of the first things that comes to mind when somebody says “retro” is “hard as balls,” we reached out to a bunch of developers making new old games and asked them which classic (or just aged) titles defeated them.

This Viking-inspired tactical-role-playing game may not be made of chunky pixels, but its hand-drawn art style calls back to classic animated films of the past. And the turn-based combat, while not completely out of vogue — high-profile games like XCOM: Enemy Unknown and the popular Fire Emblem series also use it — still evokes that cruel and bitter time when you could lose your best character in battle, and no amount of reloading could bring them back. 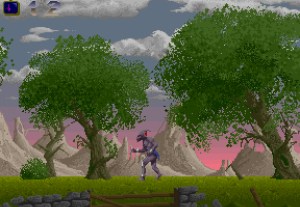 Do you remember the old Psygnosis games, like Shadow of the Beast? That’s probably the one I would kick out. I played that game on the Amiga, and I absolutely loved it, and I could not even remotely come close to winning it. Now on the flip side, there was another Psygnosis game called Blood Money, which was another one that was apparently “unbeatable” for a lot of people, and I did beat that one. So that was a proud moment. But that was an addiction I had, Blood Money. And I would say Shadow of the Beast is one of the games in my life that I really enjoyed, really loved, really wish I could’ve won, and it just bested me. It was too hard.

It’s funny, because I opened up Shadow of the Beast right now, and the funny thing is the whole thing about the art that blew me away was all the parallaxing [a scrolling effect which uses multiple background layers to simulate depth]. And I’m going, “Wait a minute, that’s exactly what I’m doing in The Banner Saga.” Now I know where I got it from.

Above: If you try to “Drop no tea,” I think the headache just gets worse.

Both Civilization II and Alpha Centauri suffered from end games that just dragged on and on. Turns become so complex and time-consuming that it starts to squeeze the fun out, which can make it hard to actually persevere to the end, especially if you aren’t certain that you will come out victorious

The Infocom games from the ’80s, such as the Zork, Enchanter, and Planetfall series, Infidel, and The Hitchhiker’s Guide to the Galaxy, could be maddeningly hard to complete. The obscure and sometimes arbitrary puzzles combined with the limited command parser could make solving the interactive fiction a real challenge. Thankfully, helpers such as the Invisiclues books were available and usually eventually welcome.

This 2D sidescroller captures two of gaming’s most enduring mechanics: platforming and a quest torescue the hero’s girlfriend. It also has a cast of themed villains and a chiptune soundtrack from composer Jake Kaufman (Contra 4, DuckTales: Remastered) that includes selections by Manami Matsumae, who created the music for the original Mega Man. 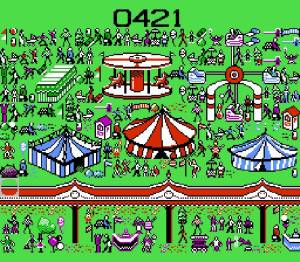 Above: Which smudge is the vaguely Waldo-shaped smudge you’re looking for?

Where’s Waldo? on the NES took me down as a kid. I thought I was the ultimate Waldo Hunter, but that game on Hard difficulty showed me otherwise.

What? Do you expect Waldo to be wearing the same clothes on every screen? Do you expect him to always be in his signature red and blue … or even human-shaped? Do you expect the game to count in real time for you to find him? You should know better from Bethesda Softworks — they aren’t going to just hand any victory over to you; you have to earn it.

And I did. I practiced the game every year of my life, and I finally beat it … in college.  What did I get out of college? The most sought-after skill on the planet: the ability to beat a children’s location game from the ’80s. Who wants to hire me now? That was a glorious victory, to say the least.

Spirit Run is an endless runner in which you jump on platforms while switching your character between fire and ice modes to pick up items and keep environmental hazards from dousing or evaporating you, respectively. And if it sounds hard, that’s because it is.

It also has some cool if slightly inscrutable pixel art and a cruel difficulty level, but it all feels just doable enough that you’ll keep playing it. And it will never stop punishing you for that decision. 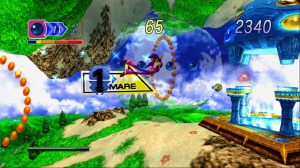 Above: I wish Rick luck; I played the HD remake of Bionic Commando and still completely sucked at it.

Personally, I have always loved the Sega Saturn-exclusive Nights into Dreams, and although it hasn’t particularly aged well, I recently played the HD remake on Xbox 360, which was OK. What I like about the game is the sheer sense of freedom you get by just flying through the levels. This freedom is further enhanced by the aerobatics the game’s hero, Nights, can pull off and the sheer speed of the game when you are trying to get those all-important A ratings.

The colorful surroundings and upbeat melodies are deceptive, however, as this game is cruelly hard. Back in the day, I could never beat it, but I am getting the hang of it again, and hopefully I will succeed in the HD remake.

Breakbeat Alley (originally released as Shatter Alley) is a rhythm-game spin on the classic block-smashing title Arkanoid. You fling an unlimited supply of balls at an approaching wall of quadrilateral death, using your finger as a paddle while everything thumps and pulses along with electronic music. It even has a cool neon aesthetic, just like how everyone in the ’80s thought the future would look. It’s simple, fast, and incredibly difficult.

I definitely had my share of nightmares from that last series of lava caves leading up to the Great Palace in Zelda II. And although I kinda like the bike level in Battletoads (and for all the hate it gets, you can tell how it inspired the endless runner genre that’s still going strong on iOS), the level where you have to race that goddamned rat down to the bomb made me almost throw the game cartridge back into Mount Doom from whence it came. 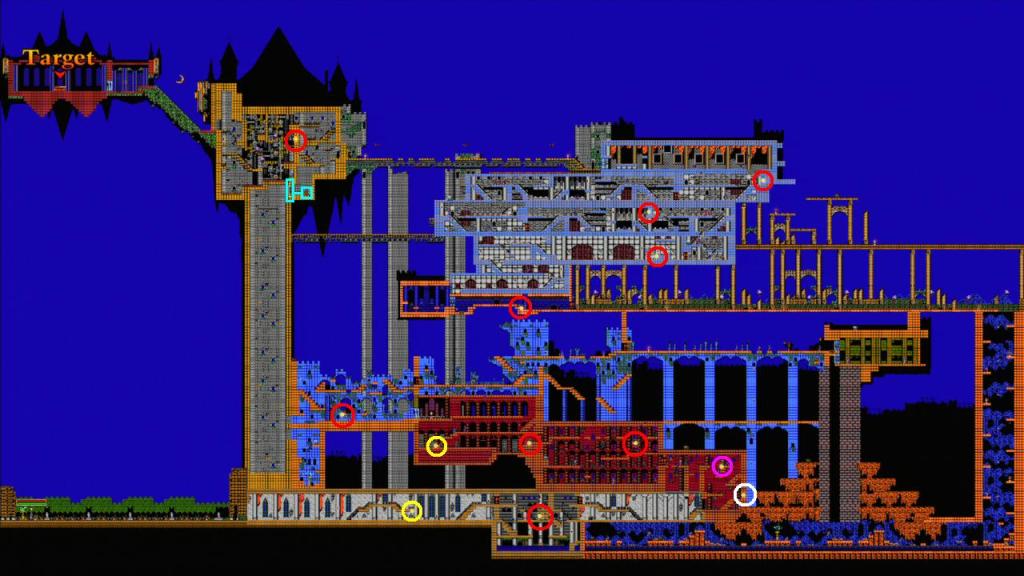 Above: Basically a roadmap of pain.

While not the most difficult game in my collection — that honor would probably go to Ghosts ’n Goblins or Deadly Towers — the most memorable hard game was the original Castlevania for the NES. When you were a kid, the bottom line with Castlevania is even if you were good you were gonna get up to Frankenstein and then he would just rip your balls off. Getting to level 5 was a huge accomplishment, and if you got past that freaking hallway (you know which one I’m talking about) and to the sixth and final level, you were at like, the top of Mount Olympus. To make matters worse, our cartridge was glitchy and would randomly hardlock after playing for too long, so there was also this tense race against time.

One night, we got to Count Dracula and finally figured out the trick to beating him. We didn’t know what a weak spot was at the time, so we thought the only way to hurt him was with the axe (which happened to hit his head). If you died, you lost the axe and had to reset. 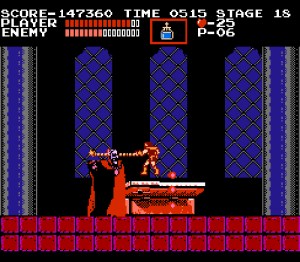 We all cheered when I figured out you could hurt him with anything as long as it hit him in the face. We fought him all night, and when us kids had to go to bed, my Uncle Augie and his friend/guitarist, Paulie, pulled an all-nighter, fighting him and actually recorded themselves playing it so they could show us and have proof of their victory. Thing was, we didn’t know what a final form was at the time, either. So there’s a home video somewhere of Augie and Paulie whipping Dracula’s head off, jumping up, hugging and cheering in glorious victory and then that victory turning into horror and shock and expletives as Dracula turned into the biggest gargoyle boss we’d ever seen. We were in awe. It was like they’d filmed Sasquatch.

I’d give anything to find that video again.