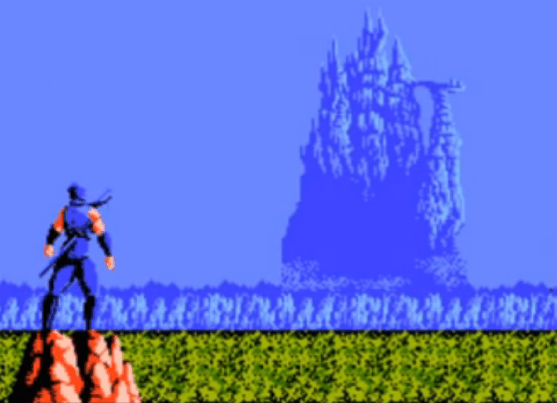 Above: OMFG why aren’t there any save spots here? This is the 54th time I’ve respawned on this rock. Someone, please, kill me. …

Compatibility for out-of-the-norm cartridges may be shaky, but the Retron 5 has some nice pros associated with its the emulation route. Save states, for example, is a concept born from emulation and are incredibly useful for people who do not have the tolerance for the anti-save spot, “man up, kid” mentality of the 8-bit and 16-bit libraries. If you’re the type of person who is sick of replaying the entire last level of Ninja Gaiden every time the final boss defeats you, you definitely want to load a save state that was taken at the beginning of the boss fight.

It also has a cheat system that loads exploits from a SD card. Hyperkin is also providing a database of Game Genie codes and cheats that will load right into the console’s cheat system, which will help out those of us that were loony enough to try (and fail) to get our original Game Genie to cooperate with the Retron 5.

One of the coolest features is that you can transfer a save file from a cartridge to the console’s internal file system. Also, you can move saves from the console to the cartridge. I am in love with the idea of backing up all of my old NES game saves and being able to transfer them back and forth.

This function is also where we run into Retron 5’s foulest problem. 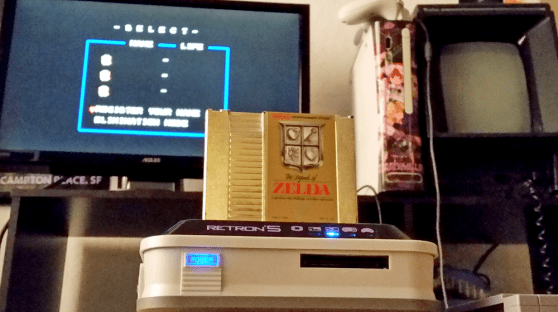 Above: For the love of … WTF are you doing, Retron? It took a lot of hours to get those saves! No, man. No. It’s not cool. I don’t care if you’re drunk. GTFO of my house, jerk.

A serious bug with this save feature wipes out the save data on some carts. From my experience, the machine erased all of my saves on a Pokémon Blue cartridge for the GameBoy Color, and on a copy of The Legend of Zelda for the NES!

I’m not weeping over the loss of either game’s save files, because I didn’t put much time into Pokémon Blue (I was more of a Yellow man), and I look forward to replaying The Legend of Zelda for the hundredth time (who doesn’t?). Just imagine someone who had put in serious hours into their 16-year-old Pokémon Blue save just to have all that progress wiped out! Until there is a firmware fix, absolutely do not utilize the Retron 5 for any games that require significant save data.

The biggest selling point, and the strongest source of my skepticism for the Retron 5, is the HDMI support. Another one of retro-gaming’s frustrations is playing 8-bit and 16-bit era games through updated video technology. To spare you the long and technical story: It’s messy. Adapters and hacks try to bring these games to a modern visual display, but they bring with them some unlovable quirks like artifacts, stretching, lag, blurriness, and bleeding or dull colors.

I prepared myself for some janky ass results when I first watched the Retron 5 pull an 8-bit game through the HDMI cable.

On my ASUS VH236H, aka “the monitor used at the Evolution world championship fighting game tournament” (chosen for the competition because of its incredibly low lag for a HDMI display), the colors popped almost as clear and as saturated as a RGB display. RGB displays, such as those used for arcade machines and the Commodore 64, are considered as the best for getting the best color quality in 8-bit- and 16-bit -era console games. Pixels on my ASUS display were sharp and in focus, with no weird artifacts or stretching. Most important for gameplay purists, I didn’t observe any lag, either.

The Retron 5 also provides a handful of thoughtful video options to tweak the visual output, of which turning the scan lines option on with my monitor is mandatory. They also offer a couple of filter options, but I’m not that into display specifics to analyze which does what. What I do know is that after playing with this console on my modern display, I was having a difficult time convincing myself to use a tube television to play games the Retron 5 could handle. 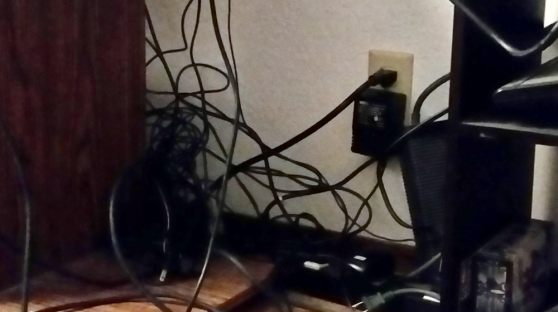 Above: At least 10 machines’ worth of tangled wires back there. The Retron is going to save a lot of zip ties.

Besides a beautiful picture, the HDMI feature does something else that plays into the larger picture of this product: it’s making retro gaming convenient. Being honest, I wish I could play all 30-plus consoles in my collection off of one display. Hoarding CRTs off the street and setting up multiple entertainment centers throughout the house in order to enjoy all of these games becomes exhausting. Having a machine that can nail a modern video standard cuts so much hassle out of the process.

Another minor detail about the Retron 5 supports this idea of convenience: controller support. Although it comes with a controller, it isn’t the greatest retro solution (and I have a feeling it was not designed to be). It’s competently designed, but I am not a fan of a thumbstick over a D-pad, and the buttons are a little too clicky and plasticky. 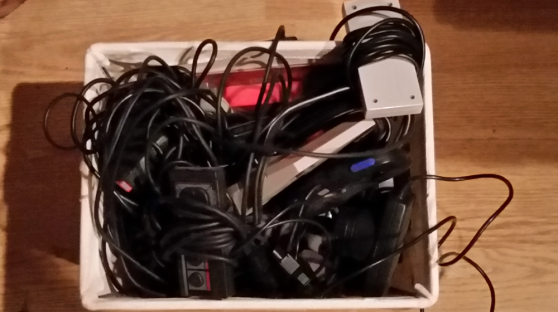 Above: Just untangle this pile of wires and plastic. I’m sure the Sega Genesis controller is in there somewhere. …

You’re going to eventually want to replace it with something that feels much more familiar. The cool little detail about this is that any Super NES, NES, and Sega Genesis controller will work with any game from any system. In one night of gaming I was able to play Street Fighter II Turbo for the Super NES, Advance Wars 2: Black Hole Rising on the GameBoy Advance, and Tengen Tetris on the NES using just a Sega Genesis 6 button controller.

As I mentioned, this seems like a minor plus on paper, but this is just so damned convenient in practice. In my case, it saved me from digging out and untangling a natty pile of controllers. In someone else’s case, it saves them from hitting eBay because they happen to have a Super NES controller but nothing for the Sega Genesis or NES. It’s these little things that relieve the stresses of retro-gaming.

Who should pick this thing up?

Above: So many conveniences in one plastic box

My list of people who should not pick up a Retron 5 is considerably shorter than the list of who should. Two sorts of people who should not waste their time on this console happen to occupy the polar ends of the retro-gaming spectrum. There are the people who are so ridiculously hardcore about playing on original hardware that they are always going to reject a clone console like this, no matter how accurate and well put together the product is. Then there are people who don’t care about gameplay accuracy, let alone playing these games in an authentic setting, to give up playing on a free emulator on their modern device of choice.

Every game enthusiast that resides in between these two poles will benefit from owning a Retron 5 on some level. It makes many of the real world hassles of retro-gaming so damned convenient and accessible. You just need a pile of cartridges and a modern HDMI display. 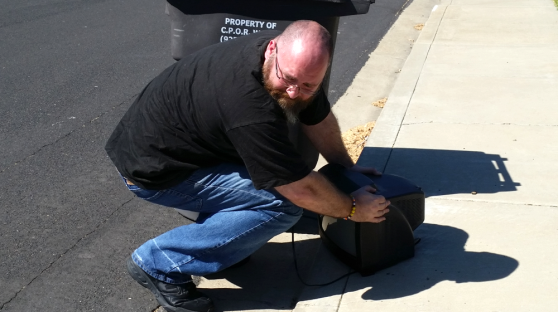 Above: There are some old habits even the Retron 5 can’t break. …

With that said, I don’t think people should be eBaying their authentic machines, either, especially since Retron has still some kinks to work out, such as support for the more experimental cartridge hardware and the horrendous game-save destroying bug (which absolutely needs addressing ASAP).

At the risk of having my hardcore retro-gaming status revoked, even I want one, badly. It’s not going to solve my hoarding problem, because I’m still going to be tempted to snatch a curbside CRT, and you will still catch me trying to play games on their original hardware … but the Retron 5 is just too convenient of a classic gaming solution to not have one hooked up somewhere in the house.