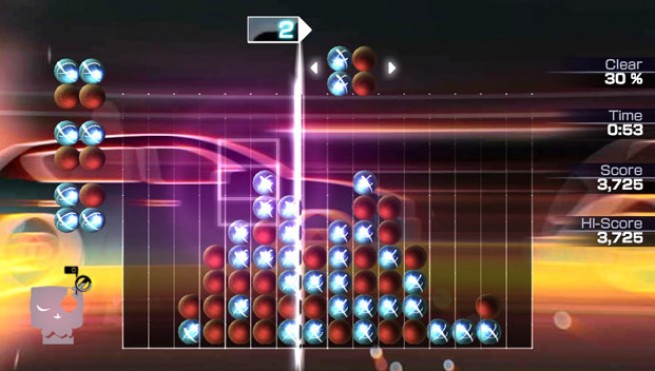 Lumines was developed by Q Entertainment, a Japanese game studio founded by Tetsuya Mizuguchi, the mind behind Space Channel 5, Rez, and more recently, Child of Eden. Music is in the studio’s blood, and exploring innovative synergies between sound and gameplay is what Q does best.

As one of the original launch titles for the PlayStation Portable, Lumines’ mostly excellent selection of electronica tracks, simple-yet-flashy visuals, and immediately accessible puzzle gameplay made for an addictive package. But where do you go from there? The Xbox 360 and PlayStation 3 versions of Lumines added more music, online multiplayer and an HD presentation, while the core game remained wholly untouched.

Now Q finds themselves at the launch of another portable PlayStation platform, with another Lumines title, and the slightly unenviable position of trying to innovate within an admittedly tight space. As Guitar Hero and Tony Hawk have proven, straying too little or too far from what made the series great in the first place is an inevitable death sentence, and new features do not always equate to a better game.

Lightswitch Rave
First and foremost are the visuals, which take full advantage of the Vita’s powerful OLED display. I might even go so far as to say the visuals are overpowering at times, as the visual transition between “skins” (the unique graphical overlay tied to each music track) is harsher now more than ever. This will turn off a lot of people, I’m sure, as it was one of the complaints of previous Lumines games, but I openly welcome it. The new skins are some of the most striking yet, truly bringing each stage alive and helping differentiate themselves from one another. 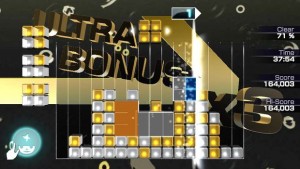 The transparent backgrounds have also been given a boost, with animated characters and abstract scenery flashing vibrantly while you stack your duotone cubes into color-coordinated formations. Each skin now has “escalation points,” where the background and music changes slightly as you progress. They make for a nice way to diversify the experience, but in some cases the segue wasn’t as smooth as I would have liked.

The music, too, is somewhat lacking. I’m definitely not saying the soundtrack is bad in the slightest, but I’d be hard-pressed to pick out any favorites; whereas, if you asked me to do so for previous Lumines titles I would rapidly rattle off a dozen or so tracks, including, of course, Pumpkin Head Man from the Rockin’ Holiday pack.

There also seems to be an abnormal amount of vocals, which isn’t really to my tastes. This is perhaps the first time the presentation outshines the sound design in a Q Entertainment product, and that’s kind of a problem, given that music is the linchpin that would normally keep you coming back for countless play sessions. Electronic Symphony doesn’t quite have that same stickiness, which greatly diminishes its value.

Venturing away from the primary Voyage mode, you’ll discover the usual timed block erase mode, custom skin playlists, as well as a Duel Mode for ad hoc multiplayer matches. The challenge modes from previous titles are missing, replaced by some interesting new social features such as the World Block. Each day, the total number of erased blocks from players all around the world will be tallied up and used to erase the “World Block,” which consists of 2,000,000 blocks. I don’t know what happens when it gets erased though since I’m apparently one of only like five people in the universe who own this game at the moment.

There’s also a new leveling system, where erasing blocks and earning points will work towards unlocking new avatars. Avatars are not just for looks anymore, as each one comes with its own unique abilities that can be unleashed during Voyage or Duel mode. I use the word “unique” generously, as there seems to only be a handful of abilities spread among the 41 different avatars. Avatars can be gifted to or from friends you’ve connected with, adding a mild trading card element to the game. Again, the lack of variety in the avatar abilities reduces the motivation to try and find new ones.

Among the avatar abilities is the new Shuffle Block, arguably the most important improvement to the Lumines formula yet. Unlike the Chain Block, which will erase any connected blocks of the same color, the Shuffle Block randomizes a cluster of blocks, regardless of color. That means that if you have a giant mountain of mismatched blocks that you’re struggling with, the Shuffle Block can give you a chance to recover. It can also be a hindrance if you accidentally mistake it for a Chain Block, something I’ll admit I’ve done while feverishly attempting to keep my Super Chain bonus going.

Conclusion
Lumines is the contemporary Tetris, an immediately accessible yet infinitely deep puzzle game where Korobeiniki has been replaced with dozens of uptempo car commercial anthems. While Electronic Symphony is a tad expensive for the limited content “on-disc,” you’re getting the same solid music-fueled experience you’ve come to expect with some exclusive new bells and whistles. I’d definitely like to see the skin roster expanded to feature some more compelling music tracks, but unfortunately downloadable content doesn’t help the current offering. Score: 78/100

Lumines Electronic Symphony was released for the PlayStation Vita on February 15, 2012. A copy of the game was provided by the publisher for the purpose of this review.