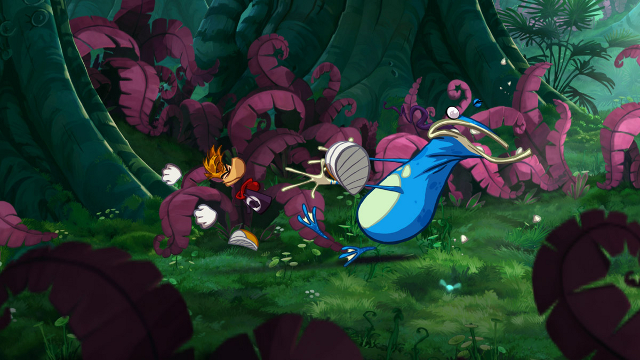 Rayman Origins is a contender for the title of the best 2D platforming game of this generation, and that’s no small feat. Everything leading up to its release suggested this, but it cannot be overstated just how pitch-perfect this revitalization of one of gaming’s most under-appreciated mascots manages to be. This is the same limbless, unidentifiable protagonist that was overrun by mutated rabbits in his own game a few years ago. This time, it’s Rayman’s turn to take center stage once again.

Rayman Origins has a very simplistic story. Rayman and friends are relaxing by a tree when their noise-making upsets a strange old lady underground. In return, the old lady sends a hoard of baddies to kidnap some voluptuous Nymphs and every Electoon in the Glade of Dreams. That’s pretty much it. The cutesy cutscene also serves to introduce the four main player cartoonish characters: Rayman, Globox, and two Teensies. Much of Origins ties in nicely with the older Rayman games as well, providing plenty of nostalgia for loyal fans who fondly remember The Great Escape and the other titles in Rayman’s long legacy.

Origins also has very simple goals in terms of game play. Rayman and his goofy looking friends’ primary objective is to collect the Electoons scattered throughout the over 60 levels within the Glade of Dreams. To do so, they must search the levels very carefully in order to find hidden rooms containing the little pink balls. They are locked in cages which the protagonists can smash to free them. Along with the caged Electoons, the creatures can also be salvaged by obtaining enough Lums during a level — 150 for the first Electoon, 300 for the second (on most levels). Each level (bar a few) contains over 350 Lums, the required number to get a medal on the level. Lums are everywhere, but it takes some strategy to end up with anywhere near that amount. Big Lums, which are much rarer than the others, cause other Lums to turn red, making them worth twice as much. You have to be quick to stand a chance of scoring big. 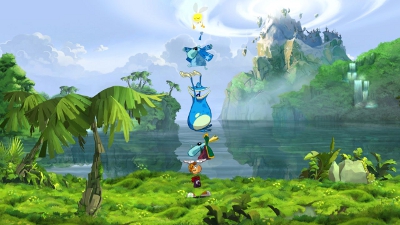 Platforming at its finest

It will take dozens of tries in most levels to get the medal, but luckily the levels are so brilliantly designed, a few more playthroughs will be nothing if not joyful. Mega Man stands up today for many reasons, most notably its undeniably catchy soundtrack and the precise motor skills a gamer must possess to beat a single level in any of the dozens of Mega Man games.

Michel Ancel, the main designer, and his team at Ubisoft might have sneaked a peek or two at Dr. Wiley’s (Mega Man’s arch nemesis) floor plans somewhere along the way, because the sheer speed with which you can glide through these levels if you have foresight and the finger skills is astounding. The rush of making it from one side of the room to another is one no other 2D platformer of the current generation has been able to pull off. Of course, if you want to spend time admiring the scenery and collecting every last Lum and Electoon, Origins lets you hang back and explore as well, plus a reset is only a couple button presses away.

The variety of game play is impressive. The classic side-scrolling is back, and memorization is key. You will die over and over, consider throwing your controller through a window, scream at the ceiling fan, and occasionally promise to break the game disc, but the satisfaction of completing a level is completely worth it. No other platformer has pulled off chase sequences as taut, terrifying, and totally satisfying as these in a very long time. There are several levels that force Rayman and friends to sprint. They have to time jumps perfectly across wildly long distances and running up walls as spikes shoot from the floor below.

The most infuriating levels of the game come in the form of the aforementioned chases. After finding a certain amount of Electoons, each of the 10 Lands in the game open up a Chest Challenge where a treasure chest tears through a level without pausing for a breath, followed closely behind by your chosen character. Similarly in terms of speediness, each level has a Time Attack Challenge. Beyond the platforming mechanic, other levels require the player(s) to hop on the back of a Moskito (…a mosquito) for segments of a very well implemented side-scrolling shooter. These can be just as challenging (and subsequently rewarding) as the regular levels. There are bosses to fight as well, but those are better left for you to discover yourself (hint: they’re huge and amazing).

I spent a vast majority of the game playing solo, but I cannot stress enough how fantastically the multiplayer co-op is implemented. A second, third, and fourth player can jump in at any time and run through a level or two with player one, causing chaos along the way by slapping each other and jumping on each other’s heads. When a player dies in multiplayer, he or she becomes a balloon, floating around the screen until another player pops the balloon. Although, much like in New Super Mario Bros. for the Wii, players can mess with each other, accidental deaths occur much less often. The balance is perfect for two or more players that want to make real progress in the game while having plenty of opportunities to irritate each other as well. Plus, with plenty of new skins to unlock along the way, no two sessions of Rayman Origins ever have to be exactly the same.

An artistic side to the madness

Now let’s talk about the music. This is one of the oddest soundtracks I’ve ever heard, but I doubt I’ll enjoy even Skyrim’s score more than Rayman’s. Whimsy must have been a buzzword in the offices at Ubisoft – the music alone made me grin and giggle. The credits sequence of a game is usually the part where I go make a sandwich or finish my laundry, but having all the music lined up back to back captured my attention for the entire 15 minutes of names scrolling through some strikingly cute clouds. 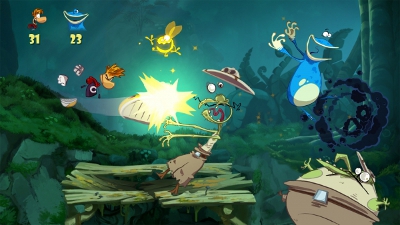 I could spend the entire review discussing the music, that fantastic variety between orchestral magnificence and silly vocalized tunes, but then there’d be no room for me to pore over the graphics. Kirby’s Epic Yarn for the Wii reached a pinnacle of its own in 2010 for stylizing a game so much as to base its entire story around that style. Rayman Origins goes in a different direction, settling on a more recognizable cartoon style, one Rayman fans will find vaguely familiar, yet effectively modernized. Every level begs to be stared at, along with each and every character in the game. Even the enemies are gorgeous.

The game does have its flaws. Provided you have some patience, they should not be any reason for concern. Every time Rayman shifts from the overworld into a level, or vice-versa, a 10-second loading screen pops up. Luckily, you can take control of the silhouette of Rayman during these sequences and run around a small, featureless screen. Playing the game in such long stretches made these loading screens all the worse for me, but providing you play the game like a normal person (i.e. not four hours or more at a time), it shouldn’t nag at you like it did me.

Now, this next one may not be a flaw for the most hardened of gamers, but this game had no problem killing me approximately 300 times over the three days it took me to finish it. It might have marred the experience for me had the build up to the last set of levels not been as well done as it was. Yes, this game gets difficult. Yes, you will die, but the learning curve helps ease a lot of that pain.

There might be a greater influx of games than ever this fall, but do yourself a favor – if you enjoy 2D platforming and have the urge to see it done right, pick up Rayman Origins today. We might not see another 2D platformer this packed with content, beauty, imagination and care for a very, very long time. Do Ubisoft a favor and reward them for bringing Rayman back the way he was meant to be. Rayman Origins receives an 87 out of 100.