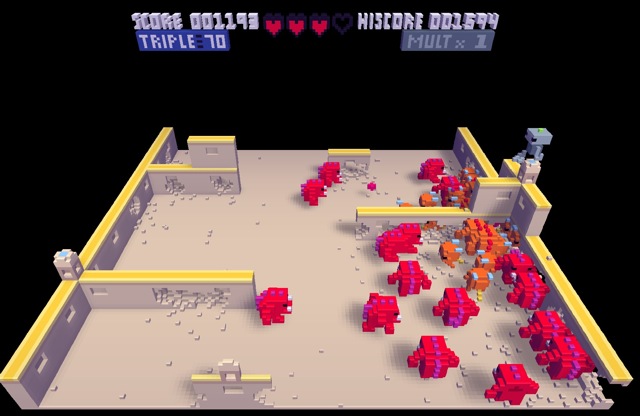 The Humble Voxatron Debut, a bundle of indie games, isn’t really all that humble, when you get down to it. For two weeks, users are able to name their own price for a bundle of top-tier indie games that includes the first-ever alpha release of Voxtatron along with the full versions of The Binding of Isaac and Blocks That Matter. And now that we’re entering the final weekend that the bundle’s on sale, we thought it might be time to tell you whether it’s worth it.

The actual results of these bundles is something worth bragging about: despite letting customers go as low as “nothing” with their named prices, the Humble Voxatron Debut has raised just shy of $800,000 as I write this, and past Humble Bundles have cleared the million-dollar mark. Historically, about a third of that money has gone to the developers, which is still hundreds of thousands of dollars, a fair chunk of change for these – dare I say it – humble game studios. It is a novel way of selling indie games in a way that they can get noticed, without a huge marketing budget.

The proceeds from the Humble Bundle get split up between the developers and a handful of geek-friendly charities. When you purchase the bundle, you set where your money goes: if you want it all to go to the Electronic Frontier Foundation or Child’s Play, you can do that. If you think it should all go to the developers – or even just one developer – you can do that, too. But by default, Humble Bundle automatically does an even split. Minecraft creator Notch is topping the contributor list with a $2,000 purchase.

All the games included are cross-platform, so you’re in the clear to participate in the Humble Voxatron Debut even when running Mac OS X or Linux. The Humble Bundle is even nice enough to include a Steam key for those so inclined (though it’s worth noting that as an alpha, bundle headliner Voxatron isn’t eligible for Steam). And I should mention that to unlock The Binding of Isaac and Blocks That Matter, you need to beat the current average contribution.

So here’s the skinny on the games included as we enter its last four days of sale:

The Binding of Isaac

If I had to describe The Binding of Isaac in one word, it would be “merciless.” The game’s story, as presented in the opening cinematic, shows Isaac’s mother systematically abusing her child at the behest of the voice of God. When God finally tells her to kill her son, he escapes to the basement under his house – which is apparently the gateway to Hell and filled with strange monsters and treasure.

It only gets more brutal from there: Isaac begins the game (and every level thereafter) crying in the fetal position on the floor. When he stands up, an inscription on the floor reveals the game’s primary control scheme: Move around with WASD and shoot in eight directions with the arrow keys in a manner very much reminiscent of Robotron 2084. You use one of the many, many magic items you find with the spacebar and drop bombs with the shift key.

It took me a few minutes to recognize that Isaac’s main projectile weapons are his own tears.

But that doesn’t mean that the game is dark. Quite the opposite, actually: the game has an appealingly super-deformed cartoon style that manages to somehow stay cute even when the walls are covered in the blood and viscera of the eldritch horrors you’ll be fighting. Oh yes – there will be blood.

The Binding of Isaac is a throwback to a time when video games didn’t hold your hand. The game will punish mistakes, and the game revels in throwing harder and harder challenges your way while continually giving less health and pick-ups. When you die, there’s no save point. It’s back to the beginning for you. Every. Single. Time.

And from the word “go,” you’ll face headless zombies that spurt blood from their necks to glowworms that grow giant sets of gnashing teeth when they spot you. That doesn’t even begin to describe the named bosses, who each come with a semi-unique matchup screen that gives them the encounters an appropriate amount of gravitas.

The randomly-generated dungeons themselves look a lot like those from the original Legend of Zelda. You’ll traverse lots of cave walls and pits and infernal landscapes, with atmospheric music to match. Interestingly, it seems like the game switches up the layouts on you depending on performance: someone who dies a lot (like yours truly) will find more loot and fewer monsters.

There’s a definite action RPG element to The Binding of Isaac, too. Isaac has four key stats: speed, range, defense and attack. But there aren’t any experience points – over the course of Isaac’s adventure, he collects money, items, tarot cards, pills and magical weapons from the rooms he loots that can affect those stats positively and negatively. More weapons, items, and monsters are unlocked the more you play, meaning that there’s almost always something else to get.

These magical items are whimsically named, with most some kind of reference to Internet culture and other 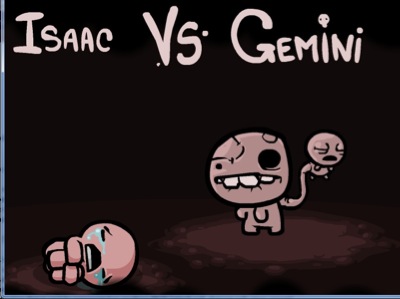 video games: a laser you fire from your mouth is called “Shoop Da Whoop,” and a tiny fly familiar that stays at a distance is called “Forever Alone.” In a very nice visual touch, most items you pick up are reflected on your character. You may find yourself with a giant head that improves damage. But that also means you might find yourself fighting Satan himself wearing high heels.

It’s a difficult game to sum up because your tolerance will largely depend on your capacity for punishment: there are plenty of satisfied customers who are glad for a game that makes no bones about its lack of compassion for the player. And there’s nothing quite like the feeling of victory after squeezing past a boss with only half a heart of health remaining. But there are also going to be those who get frustrated and put it down forever after their third time dying after stepping into a fire pit right after finishing off a tricky boss (yes, it happens).

Final Word: A fun retro-style action shooter with a wicked sense of humor, but only those with patience, fortitude and an itchy trigger finger need apply.