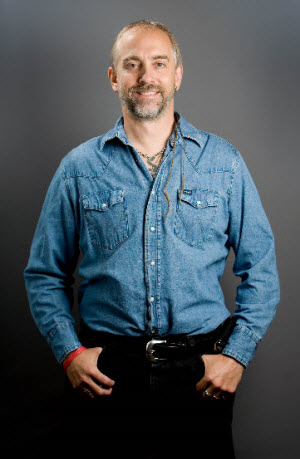 The last we heard from video game designer Richard Garriott, he was in outer space. Taking time off from game design, he dished out $30 million to take a private space flight to the International Space Station.

Now he has come down to earth, giving up on massively multiplayer games. But today, he is coming out as one of the founders of Facebook game company Portalarium.

The new startup says a lot about the direction of the video game industry, as Garriott joins an exodus of game veterans pursuing the Gold Rush of social games. And it is an interesting twist in the career arc of one of the game industry’s most famous designers. Garriott is announcing the company at the Dice Summit, an executive game conference that gets underway today in Las Vegas.

In an interview, Garriott said he has been blessed to be at the beginning of some very big things. Nearly three decades ago, he began making some of the first professionally-produced video games at Origin Systems (later bought by Electronic Arts), creating big hits such as the Ultima role-playing games. He started another of the game industry’s hot trends with the launch of Ultima Online, a pioneering game that kicked off the MMO industry when it debuted in 1997. He started Destination Games, sold it to Korea’s NCSoft in 2001, and worked for six years on the ambitious sci-fi MMO game Tabula Rasa. That game launched in 2007 but didn’t take off, becoming one of the great duds in game industry history. Then Garriott took off for space.

Now Garriott sees another sea change happening with social games on Facebook. Ever since he returned from space in October, he has been investigating social games. With Portalarium, he teamed up with some game veterans that he has worked with for much of his career. Joining him at the company are co-founders Dallas Snell (chairman  and development director) and Fred Schmidt (CEO and publishing director), both of whom previously worked together with Garriott as executives at Origin Systems, Electronic Arts and, most recently, NCsoft. Stephen Nichols, vice president and technical director, spent his entire 17-year gaming career in online games, most recently as producer and lead programmer of NCsoft’s Dungeon Runners. Garriott has the role of vice president and creative director at the company.

“This is a most interesting moment in time,” Garriott said. “I feel extraordinarily lucky to have been born at the right time to start the wave of game development in the 1970s. I felt I had a second once-in-a-lifetime opportunity to be a significant figure in the emergence of massively multiplayer gaming. It was the fastest growing piece of the game industry in the last 10 years. I think that I am fortunate for a third once-in-a lifetime opportunity in social media.”

While Garriott was preparing to go into space, the Portalarium team was hard at work creating an engine to deploy high-quality games on Facebook. The first game that the company will launch is a social poker game created by an outside development studio.

“I have never been far away from games, even when I was physically far away in space,” Garriott said. “My connection to my core friends and team members has never drifted far apart. My passion for games has never abated.”

Portalarium’s first product won’t actually be a game; it is a game platform in the form of a browser plug-in that lets games run seamlessly inside social networks. Beyond games, Portalarium will create social media around open learning, open health, open science/environment, open government and more. All of the media will be connected via a virtual space that resembles a virtual world.

While Garriott admires the fast growth of social game companies such as Zynga, he thinks that today’s Facebook games are relatively primitive in terms of game play. The games are often built in Java or Flash, neither of which were built with high-quality, graphically intensive online games in mind.

Portalarium is going to make next-generation Facebook games. But it’s also going to make them with its own suite of tools that support the creation of high-quality games, within a browser, with no download necessary. It sounds a lot like Unity Technologies’ browser-based 3-D game engine plug-in, which has been adopted by more than 90,000 online game developers.

Portalarium is giving away the suite of tools so that it will be easy to cross-promote games that are made with its tools. On social networks such as Facebook, making it easy to discover new games is critical to helping them spread among millions of users.  So Portalarium’s games will be linked to each other and have built-in cross promotion. Players will be able to easily share their games with other players.

The strategy resembles that of Zynga’s own cross-promotion network as well as Valve’s Steam online distribution engine. But publishers who adopt Portalarium’s tools are not required to publish their games through the company, as is the case with Steam.

Garriott never spoke that much about what went wrong with Tabula Rasa, which had a budget in the tens of millions of dollars. Looking back, he said that the company tried to be ambitious in creating an MMO where you could perform actions and engage in combat in real time. It took so much time creating that interface that the company fell short on creating the social depth and world interaction that would have made for a much more engaging experience, Garriott said. The game was thin, and not fun enough.

If you look at the fun experience players had in Ultima Online, that experience has yet to be rekindled on platforms such as Facebook, Garriott said. But Garriott isn’t saying that the casual game fans on Facebook — many of whom have never played a game before — should be converted into hardcore gamers.

That’s one reason why Portalarium’s first game is Sweet @$! poker. The game is easy to play and is in its beta test now. Still to come are features such as tournament play. It will take on rival games from social game makers such as Zynga and Playfish. Garriott is the first to say that competing with those companies won’t be easy, considering the big war chests they have raised (Zynga recently raised $180 million; Playfish was acquired by Electronic Arts). His company will work with both internal and external developers.

“They are formidable competitors in many ways,” he said. “That said, I fundamentally believe that quality rules the day. There is no question that us old fogies in the industry have learned some very important lessons that are sorely needed in the social gaming space.”

Garriott believes his firm will make games for a variety of social platforms, not just Facebook. Social games are often tweaked every week to suit fans; that’s a form of development — where games are more like a service than a product — that Garriott knows well from the MMO space. While it took about 10 years for the MMO market to coalesce, Garriott believes that it may take just two to five years for the new social game business to play out.

In that case, maybe Garriott came back from space just in time.

Please check out our GamesBeat@GDC executive game conference on March 10 in San Francisco at the Game Developers Conference.