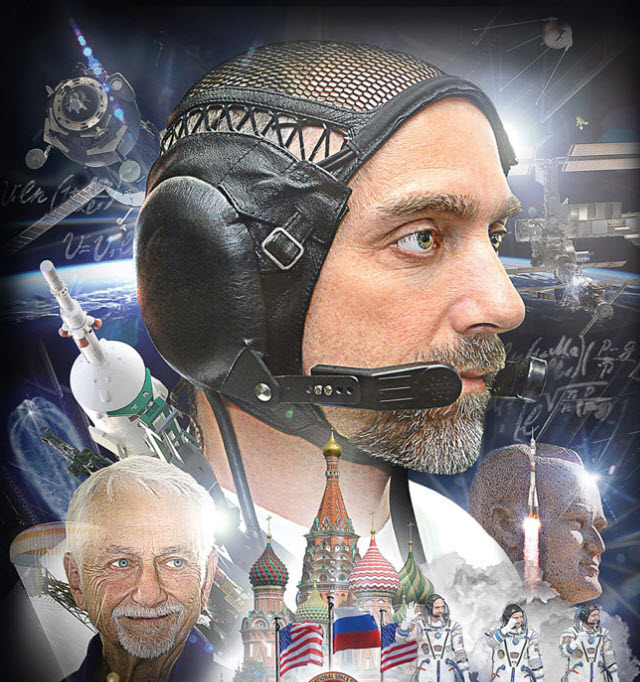 Richard Garriott is best known as Lord British, the designer of video games that have been enjoyed by tens of millions of people over the past three decades. But thanks to the documentary film Man on a Mission: Richard Garriott’s Road to the Stars, he is also now known as a pioneer in commercial space travel who paid about $30 million for a trip to the International Space Station.

The story shows how Garriott dreamed of following his father into space, only to be stymied by NASA’s restriction on prohibiting anyone with eyesight flaws requiring glasses from being an astronaut. At 13, with his hopes dashed, Garriott started plotting how to launch his own trip into space as a civilian. His entrepreneurial approach to space travel eventually paid off with the trip of a lifetime in 2008.

The film, by Mike Woolf and First Run Features, tracked Garriott’s trip into space on board a Russian Soyuz rocket. In chronicling his preparations, the filmmakers went behind the old Iron Curtain to reveal the way the Russians train their cosmonauts at a once-secret training base in Star City, near Moscow, then send them into space from a base in Kazakhstan.

Beyond making games, from Ultimate to Tabula Rasa, Garriott has been one of the primary investors in the X-Prize and Space Adventures, the private company that takes private citizens to the space station. He used his passion and profits from games to make his space dream come true.

The film is touching because Richard relied upon the advice and help of his father, Owen Garriott, a scientist-astronaut who flew aboard the Skylab space station in the 1970s. The younger Garriott is the first second-generation astronaut in the U.S.

We interviewed Richard about the film, which is available on demand and is showing in select theaters. Here is an edited transcript.

GamesBeat: Thanks for doing the call, and congratulations on getting the movie out.

Richard Garriott: Yeah, thank you. We’re very excited about it. We broke the top 10 on a number of the documentary charts, so not bad so far.

GB: That’s good, that’s good. So how far back did you guys start thinking about that as a documentary? The footage seems to go pretty far back.

Garriott: Well, interestingly, we were at a friend’s wedding together, and I knew that these guys produced documentaries, I’ve known them for some years, but honestly it hadn’t really crossed my mind. As you might imagine, preparing for a space flight is a non-trivial thing to arrange. Especially while you’re still trying to keep your day job going, if you know what I mean. It really had not crossed my mind at all. But the year before I started training was a year where I had to do a lot of medical preparation for the flight, including a surgery to remove a chunk of my liver. While at my friend’s wedding… When you get together, you say, “What are you up to?” “Well, what are you up to?” I was going around showing off this 16-inch scar I had on my belly from having a chunk of my liver removed, since it was the most recent event in my life, and that’s when Brady (Dial) and Mike (Woolf) both came up to me and said, “Richard, surely by now you have had somebody think about documenting this, haven’t you?” I said, “Well, no, honestly I haven’t.” They said, “Richard, we beg you, let us come to Russia with you to document this, this is such a special opportunity. They already knew that my father was an astronaut, that I would be becoming the first second-generation astronaut, but they were completely unaware of the medical activities, the training I was about to jump into. As soon as they mentioned it, it made enormous sense to me too. And from that point forward they became my surrogate family over in Russia.

GB: Did you know their work from before, had you seen other things that they had done and liked it?

Garriott: Yeah, Brady has actually done a very well-known, well-received IMAX movie about cowboys. Mike Woolf and his team here in Austin, I’d seen their work in advertising and music and other areas. I’ve known both of their work for some time. It had really never crossed my mind, thinking far enough ahead to think about documenting my trip. 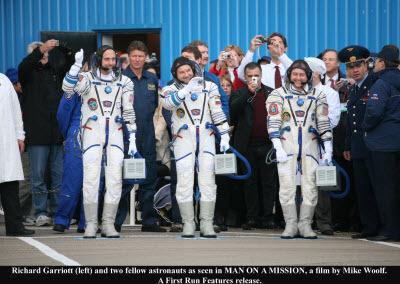 GB: What was the idea that drew them? The connection between you and your father, then?

Garriott: No… They knew that civilian space flight was a new industry that I had helped open. And if you combine that with the fact that… I’m the one that helped open it, I’m one of the first people ever to fly, I’m a generational astronaut, that just added up to them… They were saying, “Look, this is definitely a historical moment.” And they also knew that nobody in the West, especially, has ever really had the chance to see the space program from the Russian perspective. And so they knew the footage that we’d be able to capture was not only historical, but also would have this very unique aspect of living and filming from the Russian side of the international space program.

GB: So it had a lot of different hooks there.

Garriott: The story threads, as is often the case with documentaries — you sort of discover the story as you go along. The experiments I was going to perform weren’t set at the time, how we were going to arrange the mission, what part my dad would play through the whole thing. Not this film, but I mean… What his role would be through my mission had not even been fully revealed to us. Even by then. We just knew it was an important story to capture.

GB: How do you feel about how the film turned out?

Garriott: Of course, I think it turned out great. It’s funny, the first rough cut that I saw was about three hours long. When I saw the three-hour version I was just, “Wow, that’s truly amazing, I don’t know how they’re going to ever get this down to an hour and a half.” Because by definition you think they’re going to lose half the content. When they cut it down to 90 minutes, I actually looked at it and said, “Wow, not only is this much better, but I really couldn’t tell you what, if anything, was left on the floor.” It was such a more powerful movie, just by giving it a good editing. Interestingly, I have seen them try to get it down to 60 minutes, because they were debating a 60-minute release as well for television. At 60 minutes you can tell there are some story threads that have had to be left behind. But at 90 minutes I think it’s a really powerful documentary.

GB: The whole story, it has quite a few twists and turns there, it seemed like there were a lot of times where everything could have been cancelled, right?

Garriott: Oh, yeah. In fact, there’s even more that aren’t in the film. But for me, my journey to space had lots of potential dead-ends. The first was my investments in a company called Spacehab, which did fly hardware, but NASA would never let them take systems. Then, when I finally did arrange for the space flight, the internet stock market crashed, so I had to sell my seat to Dennis Tito. But there’s even things, all the way up to the eleventh hour… Of course there’s the medical issues. When they first found that anomaly on my liver, they said, “By the way, you have a disqualifying medical condition.” It could have ended right there. But literally, right up until days before the flight, there were international politics that in theory could have derailed the whole thing. It’s interesting. Even I was holding my breath and crossing my fingers… Up until you board the rocket and it’s about to start. Then you say, “Well, nobody can stop us now.”