Rise of the Tomb Raider is a grand adventure that you won’t want to miss, even if you’re one of the people who has overdosed on the stereotypically sexy and swaggering Lara Croft in the past. This multiplatform release, coming out first for Xbox One (reviewed here) on November 10, is part two of the continuing reboot of the Tomb Raider franchise from developer Crystal Dynamics. It’s an adventure worthy of time and attention during a crowded holiday season. Croft’s latest quest is full of action, and it tells a great story.

This review contains some story spoilers, but I’ve tried to minimize them.

Tomb Raider has a loyal following of hardcore gamers, with sales of more than 45 million units over time. But the latest releases in the series feature a realistic, determined Croft who is now much more a symbol of female empowerment than just a sex symbol. The heroine is still in her formative years as a young adult, determined in her abilities and tenacious in her resolve but not as overconfident as in her later years. She’s likable, and that should make this title more appealing to a wider and more diverse audience than previous games in the franchise. Her determination is an inspiration not only to female players but to anyone who wants to push beyond the boundaries of what humans can do.

Rise of the Tomb Raider is a much-needed (temporary) exclusive for Microsoft’s Xbox One video game console, which has been outsold almost two-to-one around the world by Sony’s PlayStation 4. With Halo 5: Guardians and Rise of the Tomb Raider, Microsoft is throwing a one-two punch at Sony in time for the holidays. And of the two, Tomb Raider has the better single-player campaign in terms of a well-crafted narrative. In fact, it’s one of the best games in Tomb Raider’s 19-year history. And I should know since I’ve seen all of it.

It’s debatable whether Lara Croft can convince Sony fans to switch to the Xbox One now instead of wait for the PS4 version. Rise of the Tomb Raider doesn’t have multiplayer, and it is a timed exclusive. The game will launch on Windows in early 2016 and on the PS4 in late 2016. Still, it’s a nice little victory for Microsoft to claim in the console war, as it looks like fans of the series are going to love this title. And, after all, console wars are still won one game at a time. 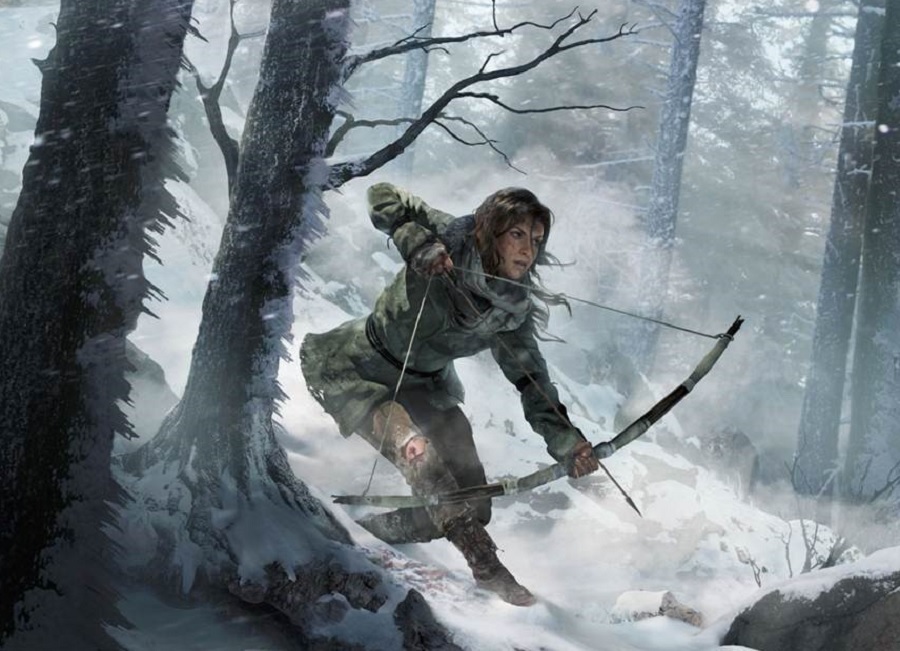 Above: Lara Croft hunting in a frozen forest in Rise of the Tomb Raider.

But it’s a more definite bet that you’ll like this Lara Croft. Her tale has a lot to offer, and it continues the evolution of a deeper, more admirable character. In 2013, this title’s predecessor, Tomb Raider, reconstructed the origins of Lara Croft. In that game, Croft was just 21 years old, starting out far more innocent and vulnerable than the confident Angelina Jolie, who played the character in two Tomb Raider movies. At the start of that experience, she was trusting but not naive. She believed in people and wasn’t cynical. But she was put into an emotional crucible, shipwrecked on an island full of menacing mercenaries. She had to learn to survive one ordeal after another, starting from the opening scene.

Croft’s behavior was touching at first. When she killed a deer for food. She apologized to it. By the end of that ordeal, adversity had transformed her into a killing machine, as she took the battle to the mercenaries and uncovered secrets of the tombs hidden on the mysterious island of Yamatai. She had survived an adventure of a lifetime and ended the story more determined than ever to seek out new endeavors. The story was compelling enough to sell 8.5 million copies of the 2013 release.

“The first one was sort of the origin story. But we still had room to see her begin to grow into the hero that she becomes,” said Noah Hughes, creative director of the game, in an interview with GamesBeat. “In this case it’s a fulfillment of beginning to realize her identity as the hero. We inspired ourselves with real-world explorers like Edmund Hillary and Tenzing Norgay, who climbed Everest. We wanted that sense of an epic expedition.”

He added, “Part of what we asked ourselves this time is, how can we continue to reveal facets of Lara’s character? One thing I love, even in the original Tomb Raider, is that sense of determination that Lara has. We expressed that in the last game, but we also have that archaeological brilliance, almost like a Sherlock Holmes or something. She’s an intellectual hero as well as a physical hero.” 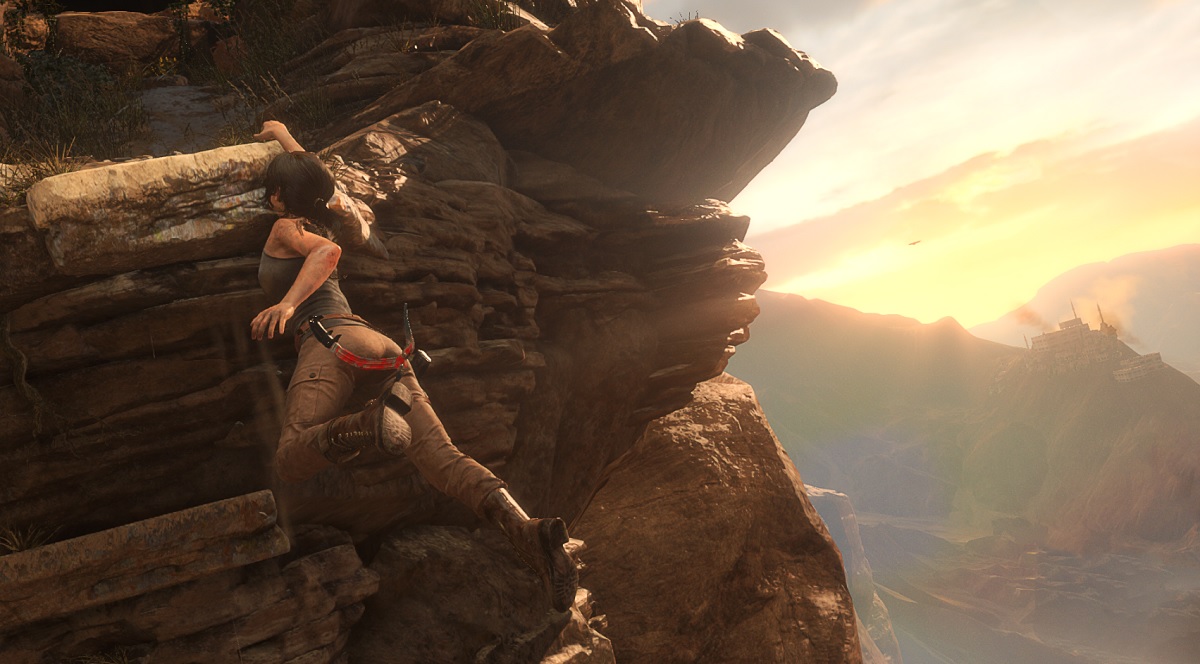 Above: Croft scales a cliff in Syria in Rise of the Tomb Raider.

A few years have passed. Croft has become more of an adventurer, but the survivor is still tugged back toward a much safer world by friends who want her to give up on her wild dreams of adventure and crazy quests for old legends. She is haunted by a secret that her father took to his grave. He sought the secrets of immortality, as embodied by a prophet who created the ancient, hidden city of Kitezh. Built by Georgy II, the grand prince of Vladimir in the 13th century, the city has been lost in the Siberian wilderness.

We learn that a prophet from long ago won over a huge following wherever he went. He was said to hold the secret to immortality, and he went on a journey from Constantinople to Siberia, fleeing those who pursued him. He hid his secret in Kitezh. Croft chases after the secret, under a searing desert sun, or with the snow crunching under her feet in a freezing forest.

Croft’s father wanted to find Kitezh, but he never got there and was humiliated by other academics. Croft wants to restore her father’s reputation, find Kitezh, and prove that he wasn’t just a crazy old man. This quest is thrust upon her, and it almost costs her life many times. But she never gives up on it.

Tomb Raider wouldn’t be fun if Lara Croft was simply fighting hostile environments. She discovers she’s on to something — and her father was too — when agents of a sinister society called Trinity try to steal her father’s documents. That convinces her that she must find Kitezh before they do, and that leads her to the Siberian wilderness, where we find her at the beginning of the game. Croft barely survives an avalanche and finds herself in a remote forest with a base camp. There, the agents of Trinity are already present, and she must escape them through stealth or fight them in direct combat.

This secret society is led by a brother-sister team who have vowed to use the immortality they seek to cleanse the world of infidels. They’re not necessarily evil at the core, but they make evil choices and spare no one who stands in their way. They have an army of followers, from lightly armed mercenaries to heavily armored soldiers that Croft can’t possibly take out unless she uses her wits. She finds allies to help her, but the battle is like pitting Stone Age warriors against a high-tech modern army. These soldiers put Croft through so much grief that you really can’t wait to turn the tables on them in the latter part of the story. 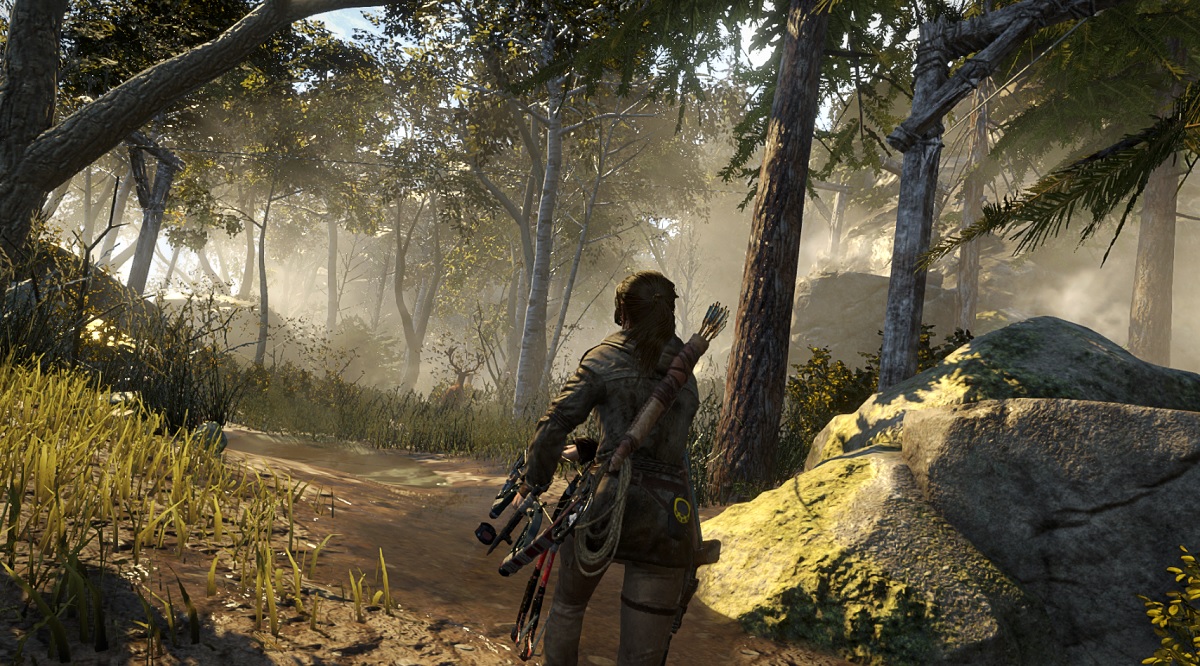 Above: Surviving the elements is important in Rise of the Tomb Raider.

A character in search of herself

Croft is stunningly rendered, down to the sheen on her hair. Her body moves realistically as she climbs cliffs or ducks blows. When she runs in the freezing cold, she brings her arms up to her chest as if she were freezing and trembling. That’s the kind of subtle, vulnerable reaction that makes Croft seem like a real person on an incredible journey.

She’s at her finest during the quieter moments, when she is reflecting. Croft’s voice-acted dialogue with herself — where she steels her courage and digs up the memories of her relationship with her father — are still the most interesting moments in the game.

She pushes away the people who try to dissuade her from her quest, and yet she finds companions among the rugged Remnant population of Siberia. Characters like Jacob, the leader of the Remnants, try to make her see the choices she faces. Croft has to find the secret of Kitezh and immortality before her enemies do, yet she must also think about the consequences of exposing the secret to the world. She’s confident but not yet arrogant. She pushes forward without thinking, but she also has to decide about the right thing to do.

Lara Croft had to deal with dangerous wolves in the previous game. And she still hunts deer and rabbits in this one. But the developers took it up a notch this time with fights with tigers and one heck of a big brown bear. The bear is absolutely huge and terrifying, and Croft looks tiny next to it. But if you follow the hints and craft the right item, you can deal with the beast. The fight is still very difficult, but it’s not as impossible as it seems after the first few times the bear kills you. The tiger fights are a little more difficult, but if you can get to high ground, you’ll be in much better shape. These battles are unpredictable, as the animals are much more maneuverable than human enemies. It’s almost like one-on-one gladiator combat. 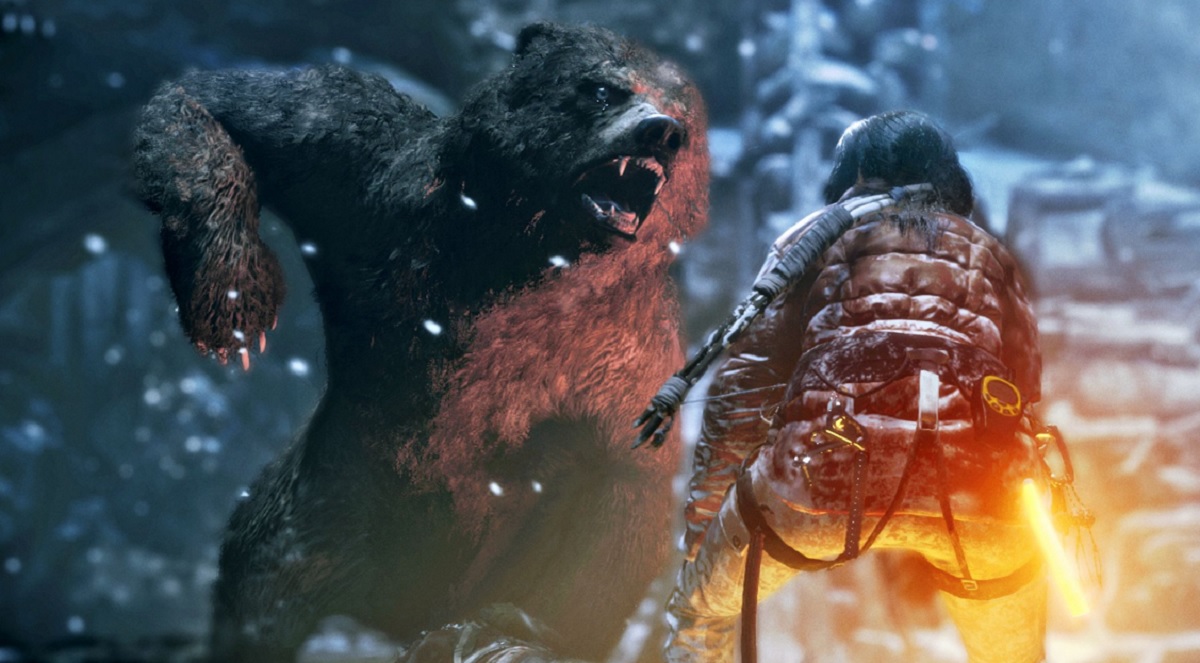 Above: Fighting a brown bear in Rise of the Tomb Raider.