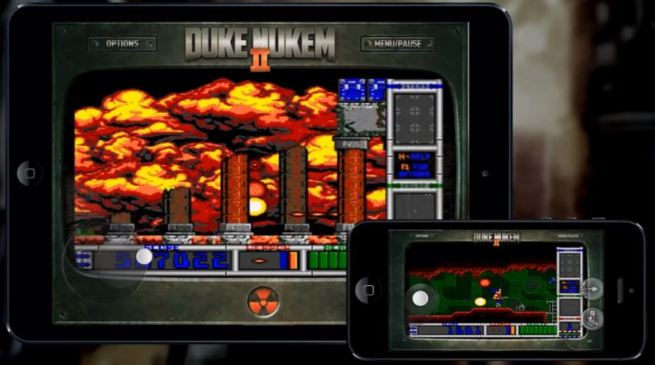 Three dimensions is for punks. Developers 3D Realms and Interceptor Entertainment is bringing back Duke Nukem in his original 2D form.

Interceptor announced today that it will soon debut Duke Nukem II on iPad and iOS for $1.99. This is a touchscreen capable version of the 1993 release includes all of the side-scrolling alien-blasting action of the original.

“It’s an amazing experience to be able to work on such a beloved franchise,” Interceptor Entertainment chief executive Frederik Schreiber said in a statement. “As kids, we were all big fans of Duke Nukem II, and working with Scott Miller and 3D Realms to bring this classic back to life on new platforms was a dream come true. Scott is a great partner, and I’m looking forward to working together on more exciting titles in the future.”

3D Realms was the studio that originally created Duke Nukem II. Interceptor is handling development duties on the iOS version.

“Before Duke Nukem 3D, before the sunglasses, before the one-liners, and before the strippers — many gamers never knew there was another incredible alien ass-kicking Duke game, a cutting-edge game for its time that still holds up 20 years later,” 3D Realms chief executive Scott Miller said. “I’ve loved working with Frederik Schreiber and the entire [Interceptor] team. These guys know and love Duke like they’re family. And the love shows in this kick-ass release.”

Check out the announcement trailer below:

Interceptor is simultaneously working on a reboot of 1994 violent first-person shooter Rise of the Triad, which it plans to release this year.