How about: Super Smash Bros. is a popular fighting series, so it’s lack of clones when compared to other successful games stands out.

Most fighting games stick to the formula established by Street Fighter, focusing on depleting an opponent’s health bar while performing special moves only possible by specific button combos. Smash Bros., meanwhile, is all about beating up your opponent until you can knock them off the stage. It has become a big hit, with the last versions selling very well: the 3DS release has sold 7.92 copies as of the end of 2015 while the Wii U version ended the year at 4.6 million. A fan of the Smash Bros. is now making his own take on that kind of fighting game with the indie project Rivals of Aether.

We got to talk with the game’s creator Dan Fornace about his Smash Bros. inspiration and history with that series, what makes his game different, and how Microsoft has helped him with the project. 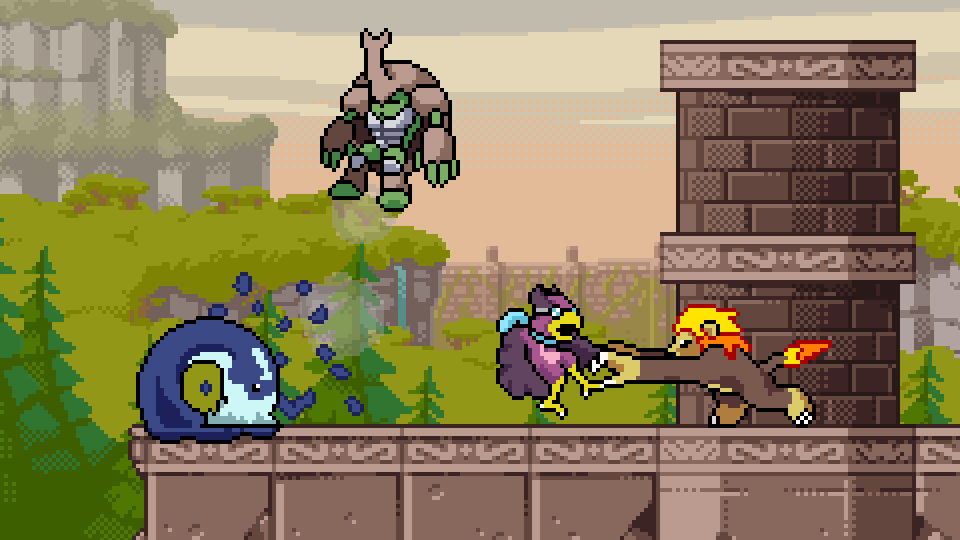 Above: The roster looks pretty cool.

GamesBeat: Super Smash Bros. seems like the inspiration here. Do you have a history with that game?

Dan Fornace: Yeah. I played N64 when I was very young, and then I played Melee throughout high school, and in college I got into the competitive scene. I played Brawl on the east coast when that was big.

GamesBeat: Have some of your old friends from the competitive scene played this game? What did they think of it?

Fornace: It’s nice, because when I first started out, I was involved in the Smash scene — I was never that great a player. People didn’t recognize my tag. But I had friends in the scene. I had been working close with the Smash community while building this. So from the beginning, right after I announced it, I had a thread on Smashboards and we were getting playtesters from that community. I’ve been really grateful.

A lot of Smash fans have been really nice in their reception. Of course we have the opposite side, where you have Melee players who tell you that Rivals is terrible and it has no depth and there’s nothing in it. But we also had a lot of players like Mango playing it on stream. A lot of the big Twitch Smash players were playing it when we launched on Early Access. It was cool to see them get involved and give a new fighting game, a new Smash-style game a chance.

GamesBeat: The Smash community is a little famous for immediately blaming the developer and creator of the series, Masahiro Sakurai. They blame him for everything they don’t like about the games. Do you have a little bit more sympathy for him now, after making your own game?

Fornace: I think so. The fact that I’m from the community makes it a little different. People are a bit more understanding. Because it is Smash, people are already mean me, similar to Sakurai, just because that’s what people do. There are jokes. When I say stuff they’ll crack jokes, like the creator of the game dance. That’s kind of funny. But it’s nice to have a fan base that gets involved. 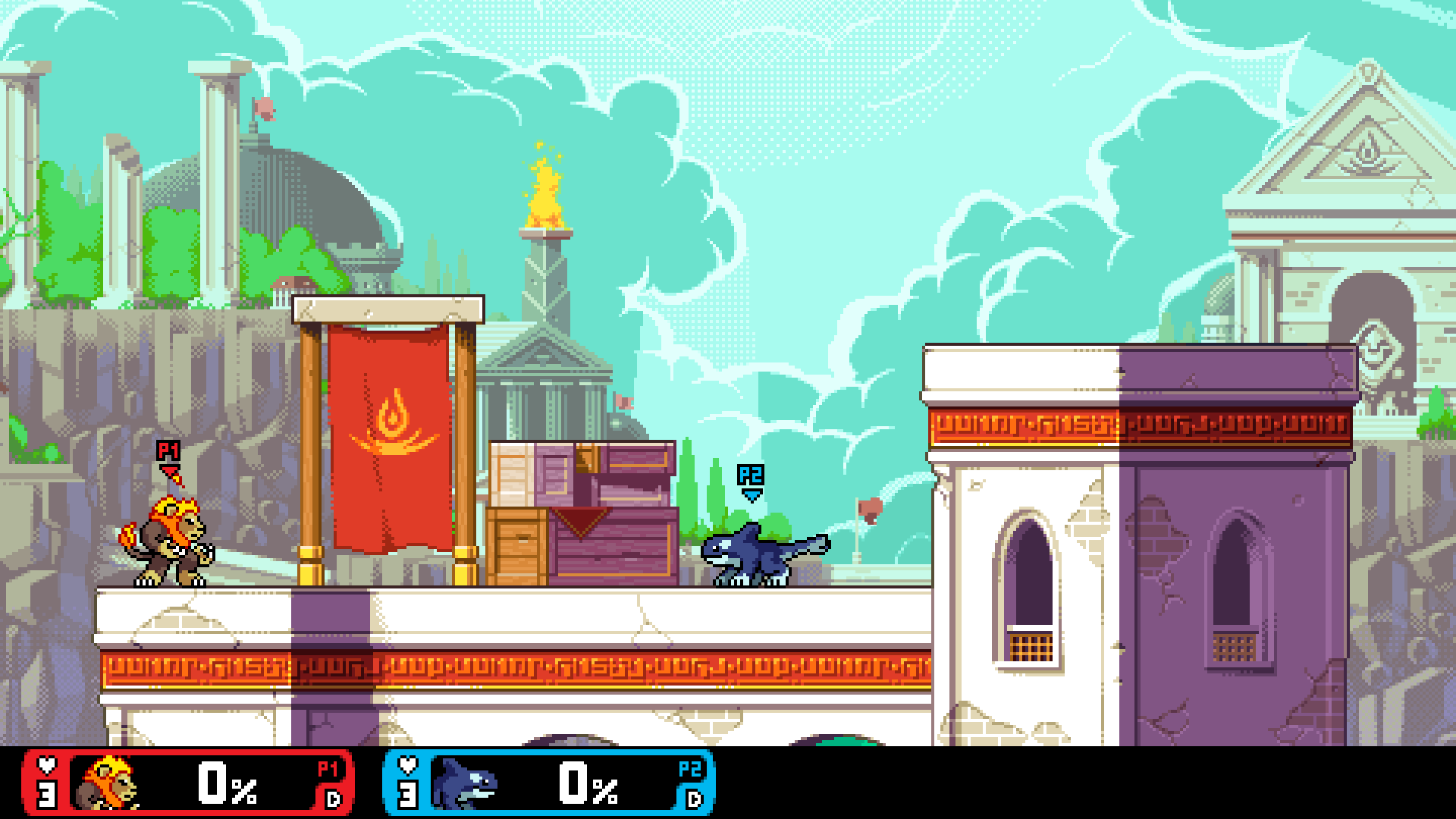 Above: I like those happy clouds in the background.

GamesBeat: There’s the two schools in the Smash community. Some like playing with no items and no stage hazards. Then other want it more like a party game with all of that stuff on. A lot of the stages I played in Rivals of Aether are pretty regular, but I was playing some stages that remind me of Brinstar with the fire coming up. Is that a fine balance, something you worry about?

Fornace: The way we did the stages, it’s a bit different from the Smash games in the sense that every stage has two modes. There’s the Aether version, which is where you’d play free-for-all, play for fun. Those have hazards like the fire. The Tower of Heaven has rules. On the plant stage there’s a giant plant that eats you.

Every stage has a basic version too, where it keeps almost the same platform layout, but removes all the hazards. The basic stages, we use those online and in tournaments. The Aether stages are not played competitively. That’s how we got around having stages that are made for competitive play.

GamesBeat: With the Smash influence, a lot of those fans maybe carry over. When you’re making a character, do you ever feel like, this needs to be our Mario? Or are you trying specifically to do different things.

Fornace: We’re definitely trying to do different things. The characters are all inspired by the elements. The one thing we did do is the first character we made is Zetterburn. He’s our Ryu from Street Fighter in the sense that he’s our character that’s good to start if you play Smash. He feels a lot like a Smash character. He plays a lot like Fox or Wolf from Smash Bros. A lot of the way he controls feels like Smash. He’s a good baseline. But then all the other characters, we try to make it more about their element and their play style. Is this character a zoner? Is this character a rushdown? More so than trying to imitate Smash characters. 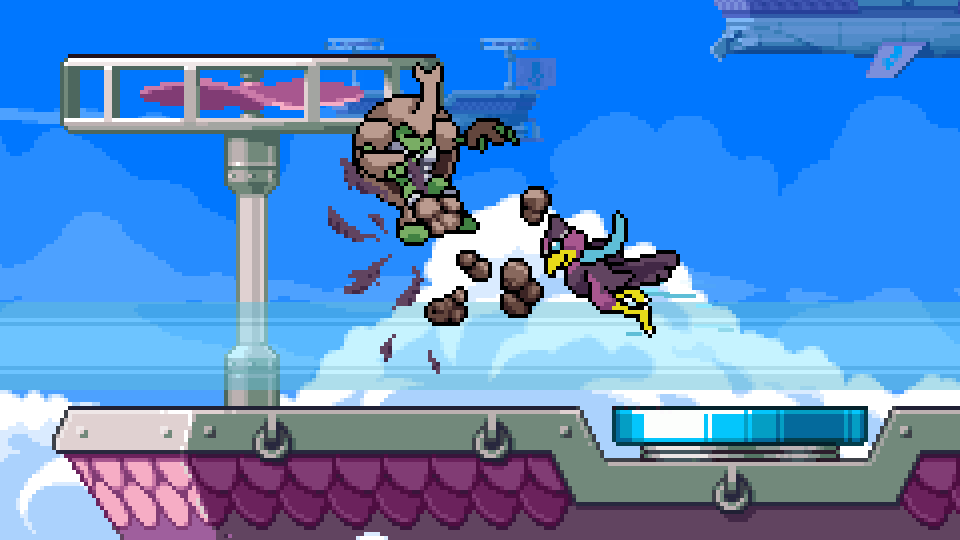 Above: Each character corresponds to an element.

GamesBeat: Playing it, I noticed how different some of them are. I was playing this land-killer whale character who would make puddles and teleport to them. And then I was this bird character who could only do smash attacks in the air. It was neat. They all felt completely different. Do you get a little tired, though, of people constantly comparing it to Smash Bros.?

Fornace: Yeah, I definitely think it’s funny. One of the things — as a designer I’ve always — whenever I play a game, I feel like I get this rush of things I like and what I could pick and choose. If you look at a lot of Rivals characters, there’s inspiration from a variety of games and media. For example, Kragg’s pillar, I was inspired by a scene in Fullmetal Alchemist where he’s doing the test and he shoots the stone pillar out of the ground. Our community is very quick to recognize if something’s inspired by Smash, but I feel like they’re not — they wouldn’t be as stringent if it’s from another game or area.

GamesBeat: With a game like Skullgirls, people don’t always say, Street Fighter this or Darkstalkers that. It doesn’t get compared to other games as quickly. There have been Smash Bros. similar types of games, but when you see the percentages and other things on the screen —

Fornace: Not only what the characters are doing, but the rules we used — I wanted to make sure we kept to the core of what makes Smash interesting. I’ve played around with making games for fun, different ways you can do health and whatever. But for me one of the reasons Smash is fun is the way combos and percent work.

It’s a nice system. As you rack up percent, combos start to be less likely because people are getting knocked further away, but that’s also when you’re trying to KO. It’s a balance where the life ramps up over time, as opposed to a health bar where it’s always very similar, except for super bars. 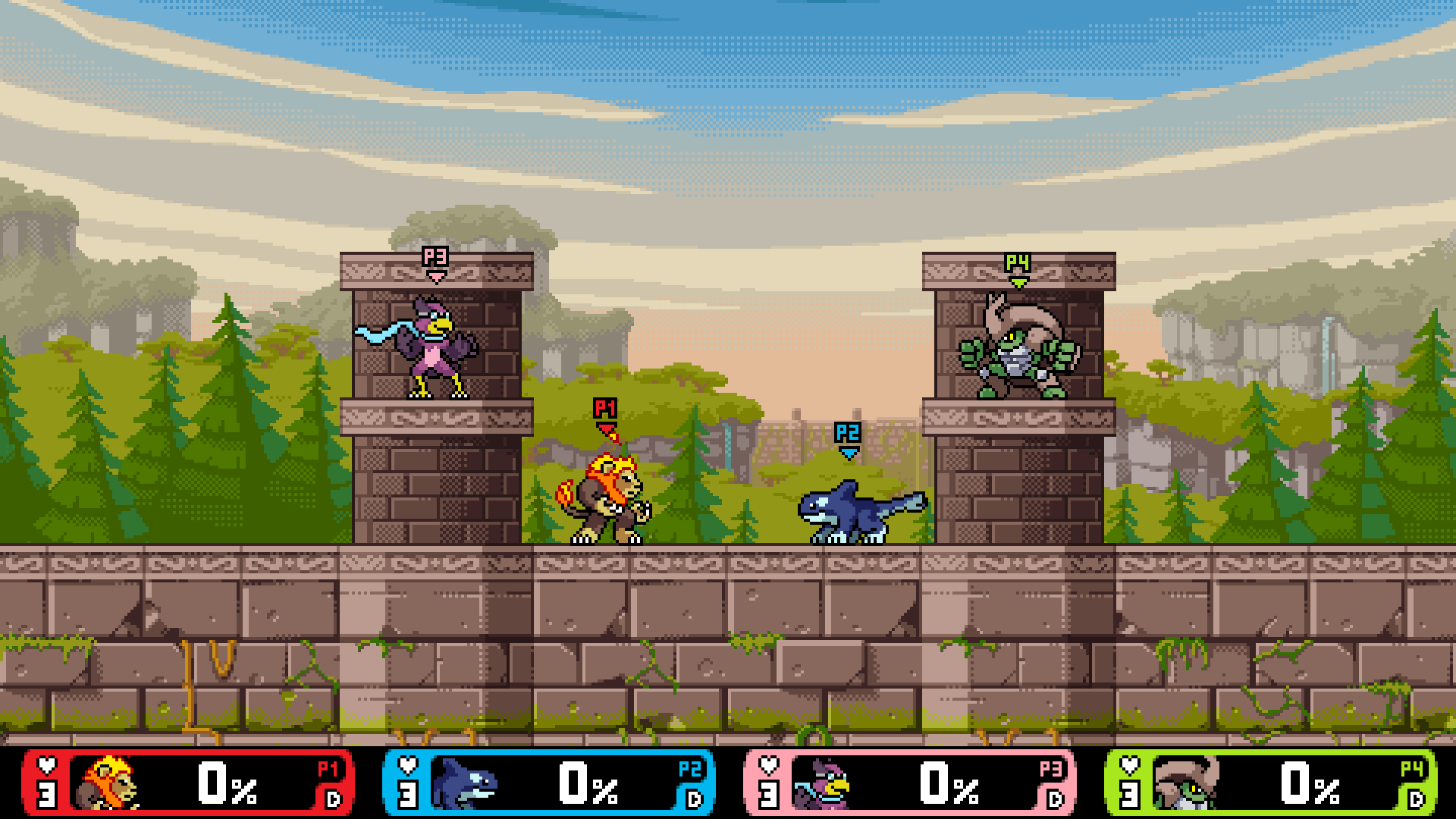 GamesBeat: What platforms are you releasing on?

Fornace: We launched on Early Access at the end of last September. We’ve been on for a few months now. We’re also doing Xbox One. We’re hoping to get on the game preview program as soon as possible, and then we’ll launch both Steam and Xbox releases around the end of the year if everything goes well.

GamesBeat: Has Microsoft been a good partner for you?

Fornace: For sure. I have the benefit of — before I went indie and started working on this game, I was actually at Microsoft Studios working on the XBLA team. The luckiest thing for me was that Chris Charla was on that team. As soon as I decided to go indie, I emailed him and said, I’m making this game that’s pretty good for console. Can you tell me more about what’s going on with ID@Xbox? It was a good fit. That’s been our main focus, PC and ID@Xbox.

GamesBeat: Do you have any idea why the XBLA brand isn’t a thing anymore?

Fornace: I’ve seen the articles. I’m a big fan of XBLA myself. I’m still happy that I got placed on that team. I came in on the college hire program, and it was kind of just chance that I got put on that team. That type of branding and the games that came out really did fit the time, as people have been saying. I think it’s kind of gone away just because there are so many different sizes that fit in there now.

It used to be that all the XBLA games were similar in scope. But then even as we were getting near the end of XBLA, that started to change. In the same week you would launch a game like Trials Evolution or State of Decay, which look like triple-A games and feel like them too — maybe a little smaller in scope, but still these amazing games. And then they’d launch next to games like Castle Crashers, which felt more like classic XBLA games.

The landscape was starting to change anyway. Now ID@Xbox has a huge variety of sizes. That’s part of the reason, I think. Digital games have become so big that there’s no longer a specific XBLA size.