Roblox and Warner Bros. Pictures are bringing a big party to Roblox to celebrate In the Heights, the new musical film from Hamilton creator Lin-Manuel Miranda.

San Mateo, California-based Roblox has created an immersive experience that simulated the Washington Heights neighborhood from the film so that players can attend a big virtual launch party for the film. Players can party inside the space and then on June 10 and June 11, they can participate in special launch party activities. It’s the pandemic’s equivalent of a Hollywood premiere.

Roblox went public in March at a $41.9 billion valuation on the promise of building a the metaverse, the universe of virtual worlds that are all interconnected, like in novels such as Snow Crash and Ready Player One. And as you can see from the images, Roblox is simulating the world of In the Heights in an area that can fit 30 to 50 players in a party setting. Those parties will be replicated across Roblox’s servers so that millions of people can participate.

“This is the first time where people are going to be coming together and they’re actually going to feel like they’re part of the movie,” said Christina Wootton, vice president of brand partnerships at Roblox, in an interview with GamesBeat. “Rather than just a passive experience, you’re going to be immersed in the experience.” 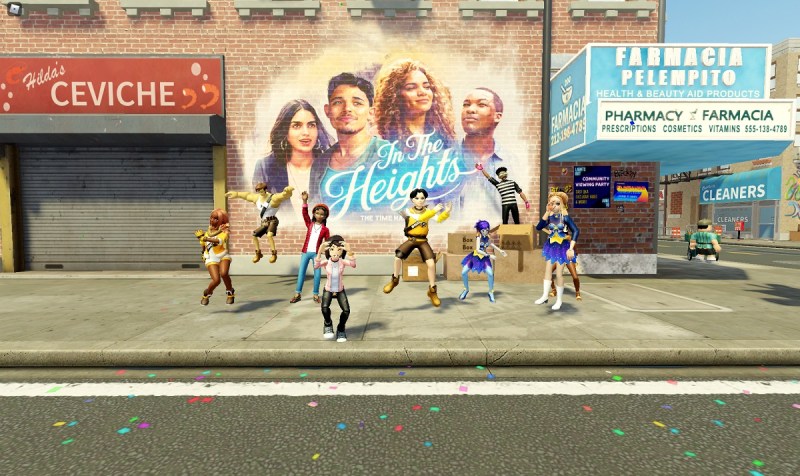 Above: In the Heights has been reproduced in Roblox.

I got a sneak peak at the space. The neighborhood consists of a few square blocks of a city and it has photorealistic images of buildings signs and places that are in the movie, such as the Usnavi corner bodega. I liked how the virtual space combines realistic imagery with the blocky, Lego-like style of Roblox.

“You’ll just notice the fidelity improvements in the look and the feel of the space,” said Roblox’s Morgan Tucker, senior director of product for social at Roblox, in an interview.

The first-of-its-kind Launch Party on Roblox brings the music, dance, and Latin American culture of the film to live, said Wootton. On June 10, starting at 10 a.m. Pacific time, the space will transform into a Lights Out Viewing Party and the cast (as well as Miranda and director John Chu) will host a Q&A and share an exclusive clip ahead of the film’s premiere.

On June 11 at 6 p.m. Pacific time, visitors will have the opportunity to participate in what is expected to be the largest virtual flash mob ever, Wootton said.

Usnavi is a character from the film who saves every penny from his daily grind as he and his tight-knit community hope, imagine, and sing about a better life. Visitors to the virtual neighborhood can hang out outside Usnavi’s corner store, contribute to murals, and watch behind-the-scenes videos and interviews, including a dance tutorial from the movie’s choreographer. In addition, visitors can collect in-experience virtual items directly inspired by the film through fun, interactive minigames, and scavenger hunt. Folks can collect three exclusive metaverse emotes as well.

“Roblox is pushing toward simulation, which is our goal in the long run. But the we pair that with creative control and expression,” Tucker said. “We want the engine to be capable of photorealism, which I think you see some of this here. But if you think stylistically, it’d be cooler to do something that looks like a Pixar movie. There’s nothing that prohibits you from doing that.”

Moving to the metaverse 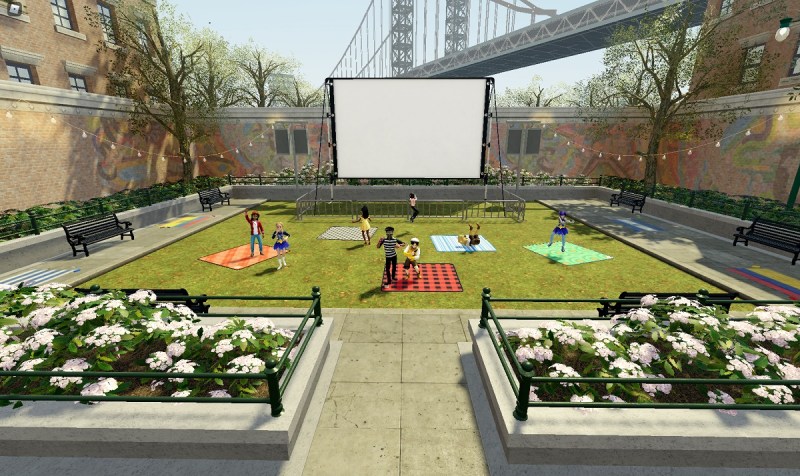 Above: You can watch a screen of special In the Heights videos in Roblox.

Roblox built the space with its internal development team, dubbed its social reference team, whose purpose is to show other Roblox developers what’s possible with the platform’s tools. They created new emotes so that players can dance with each other using the same moves as the dancers in the movie.

Roblox has partnered with Warner Bros. multiple times with both music and film events. And it’s a good example of how Roblox gives entertainment brands huge exposure to fans, as Roblox has more than 42 million daily active users. On average, Roblox users spend 2.6 hours a day in the virtual world.

“We’ve partnered with Warner Brothers for many years and they are a key partner of ours,” Wootton said. “As we were thinking about doing these launch parties, In the Heights came up in conversation. And we really loved the idea of brand, since Roblox is all about connecting people through shared experiences, and bringing people together from around the world, and having that sense of community and belonging and diversity. And we love the idea behind the message of this movie, about a community that dreams and brings people together and celebrates.”

This brings folks one step closer to the metaverse.

“We’re connecting people all over the world. And we see this having billions of people one day on our platform connecting and having shared experiences and working together playing together,” Wootton said. “I think this just really opens people’s eyes to the capabilities of what’s possible on Roblox.”