Step this way to the metaverse. Roblox has a virtual launch party coming with pop star Ava Max, who will sing songs from her new album Heaven & Hell on Friday.

The event is a new way of expanding the entertainment in Roblox, a virtual gaming world with more than 150 million players, who play do-it-yourself games and learn programming on the side.

The “album release party” will begin at 4 p.m. Pacific time on Friday inside a concert venue inside Roblox. Ava’s Launch Party Place was created by Atlantic Records and Artist Partner Group, in partnership with a top Roblox developer.

The place brings the album’s supernatural space theme into the metaverse, the universe of virtual worlds that are all interconnected, like in novels such as Snow Crash and Ready Player One. Roblox CEO Dave Baszucki is one of the believers that virtual worlds like Roblox are the forerunners of the sci-fi worlds that we would all like to see more than our next Zoom calls. Baszucki will talk about this topic at our conference about the metaverse on January 27.

Fans will use jump pads to get to the sky-high dance floor where they can enjoy Ava’s new tunes, shop cool merch to dress their avatars up with Heaven or Hell wings and swords, complete fun quests, socialize, ask Ava questions, and get a private live performance of a couple of her hit songs, just for her fans on Roblox. 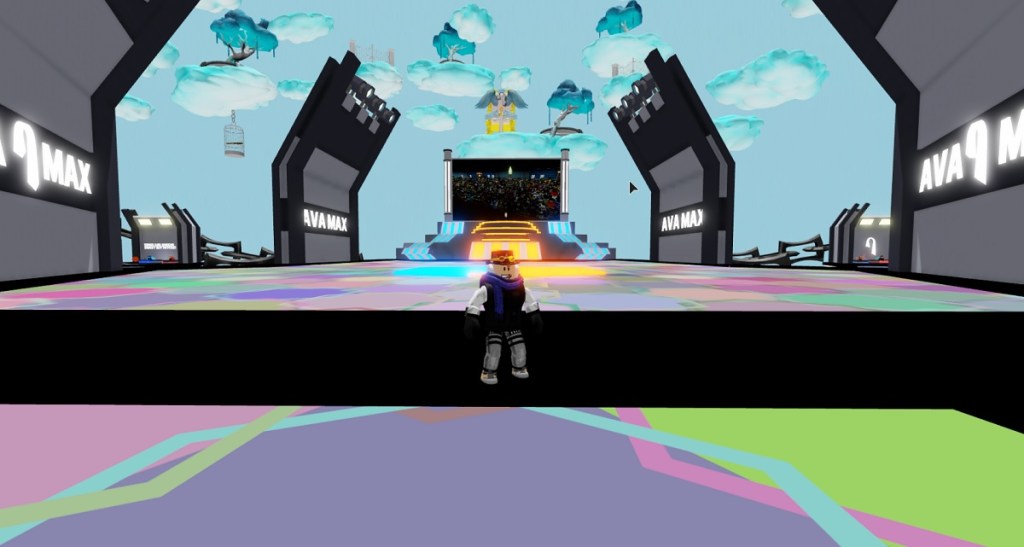 Above: Ava Max will have her own launch party place in Roblox.

Ava Max said in a statement that she misses interacting with fans in person, as concerts can’t be held during the pandemic. The virtual event is the next best thing, and entertainers such as John Legend and Travis Scott have been taking advantage of it to expand their brands in the digital realm. In contrast to John Legend, who appeared via motion capture tech onstage as an animated character, Ava Max will appear as herself in a video on a screen in the concert room.

Roblox and Warner Music Group have developed a partnership that will enable WMG’s artists to tap into the power of Roblox’s platform in the weeks and months ahead. So you can expect more virtual concerts to happen, said Jon Vlassopulos, vice president and global head of music for Roblox, in an interview with GamesBeat.

To be part of Ava’s first-of-a-kind record release party, existing users simply need to enter the Ava Max Launch Party Place on Roblox. New users can create a Roblox account for free and enter the music venue ahead of the start time.

Epic Games and Wave have led the way in virtual concerts. The difference between Epic’s Fortnite and Roblox, however, is that Roblox is a platform, while Fortnite is a game (though Epic is certainly attempting to position it as a stepping stone to a metaverse). Roblox has created the foundations of putting on virtual concerts and handed them over to companies such as Warner Bros.

Ava Max’s audience is more like in the teens and older. She has, after all, some sexy songs. But the demographics of Roblox are also getting older, as teens become young adults and stay with the platform, Vlassopulos said. And it’s true that not all of Roblox’s 150 million users are 10-year-old boys. 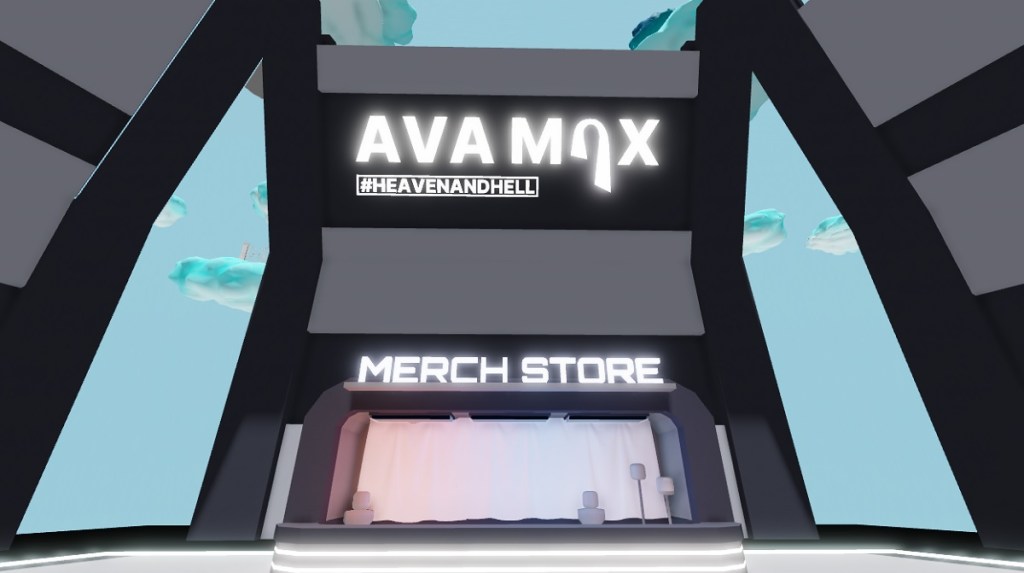 Above: You can buy merch from Ava Max inside Roblox at her virtual concert.

“Other virtual concerts we have seen have had male entertainers, and in this case, we have a female and her message of empowerment resonates with our audience,” Vlassopulos said. “It’s a match for us that way, as we have a fast-growing female audience.”

You can stand in line at the merchandise desk if you want that experience. But you can also just engage in commerce wherever you are standing.

“We’re not trying to replicate every experience you have at a concert, like sticky floors,” Vlassopulos said.

Asked if his work on the metaverse was done now, Vlassopulos said, “Rock & Roll.”