A glorified port wouldn’t cut it.

While some of these necessary changes undercut the illusion of being a rock star, there are enough elements carried over from the main Rock Band games that fans of the franchise ought be satisfied with Rock Band VR and find a game that will become a core element of their Oculus Touch lineup. 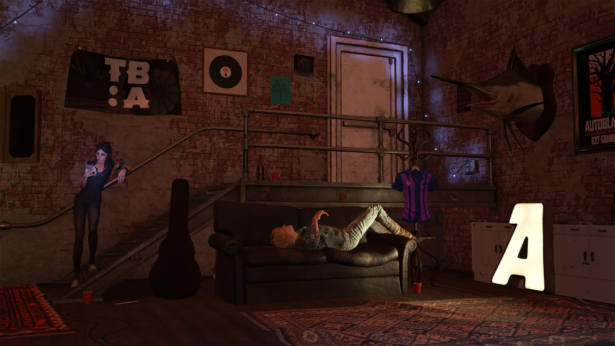 Above: Bass player Maddy (left) and drummer Wes (right) hanging out in the band clubhouse.

How to be a VR rock star

Derek, Maddy, and Wes (the other three members of your band) are featured in brief backstage cutscenes where they argue about who wrecked the band’s van, what costumes they’re supposed to be wearing for a Halloween show, and whether or not to capture the goat that another band left behind. The story elements are short and endearing.

Once you hit the stage, you see how Rock Band differs in VR from its past incarnations. Rather than matching notes that scroll down a vertical track, you follow a horizontally scrolling “song map” that provides cues for playing chords, not notes. For the most part you play the chords free-form, earning points for repeating patterns of chords that you make up as you go along. You also earn points by following chord prompts that ensure you’re in the correct key and making the most appropriate sound for that part of the song.

Focusing on chords versus notes is a smart accommodation for VR. In the main Rock Band games, you can glance down at the neck of your guitar and see where your fingers are positioned, which comes in handy if you need to move them quickly and aren’t good enough to do so purely by touch.

You obviously can’t see your fingers in Rock Band VR, and that might make it difficult for new players to be precise. A classic mode is included with Rock Band VR almost as though Harmonix and Oculus wanted to prove a point about why the changes to the traditional Rock Band formula were required in order to make for a satisfying VR experience. I only played a few songs in classic mode because it was so dissatisfying when presented in VR. 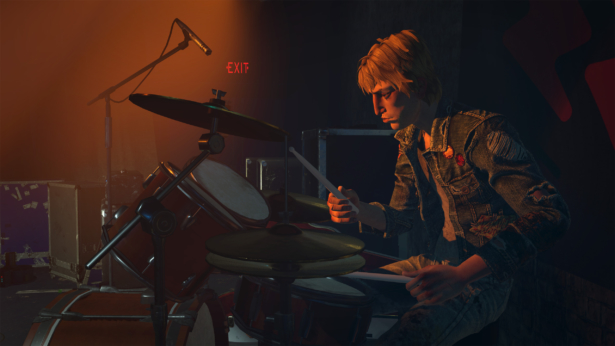 Above: You can change positions around the stage, in this case jamming next to Wes, the band’s drummer.

Successful VR design also depends on how well players are allowed to project themselves into the virtual space. Having your hands tied to a guitar means no hand-tracking, and hand-tracking has become a quintessential element by which VR developers help fool the brain into believing the illusion. Harmonix and Oculus came up with some thematically appropriate techniques to take up the perceptual slack.

In Rock Band VR, Overdrive energy is earned by successfully repeating chord patterns, and you can extend the Overdrive period by banging or shaking your head, or rocking the guitar back and forth, or even picking the guitar up and holding it up to your face as if you’re playing the guitar with your teeth. All of these movements not only help you feel more like a rock star, they also give you opportunities to physically interact with the virtual space.

You can press the whammy bar on the guitar to teleport to a few different positions on the stage, including a position right in the face of the audience, which makes for a great place to stand during a guitar solo.

During a solo, motes of light fly off the guitar and through the audience. You can aim those motes by twisting the guitar around, and when members of the audience are hit with those motes they cheer more loudly and get more into the show. It’s another way to get you moving, and therefore further into the illusion. The problem is that a raucous guitar solo with a ton of expressive movement is likely to send the Oculus Touch controller on the end of the guitar flying across the room.

Above: The Oculus Touch Rock Band VR adapter adheres to the back of the headstock and then hypothetically supports the Oculus Touch.

You can’t rock when your ax breaks

Oculus Touch ships with a Rock Band VR adapter that can only works with models of the familiar Stratocaster Rock Band controller that have three holes on the back of the headstock, which can accommodate the three pegs on the adapter.

The underside of the adapter is sticky but not quite adhesive, so you can remove and reattach the adapter. The pegs on the adapter are short and don’t click into place as much as they rest inside very shallow holes on the back of the headstock. You then slide the grip of one of the Oculus Touch controllers through the adapter. The Rift sensors track the position of the Touch controller, and the guitar you hold in Rock Band VR is matched perfectly with the Stratocaster controller you are holding in the real world. It is an effective illusion.

Having to constantly worry about what’s going on back in the real world and whether or not your gear is going to break down while you’re trying to put on a virtual rock concert breaks the illusion that Rock Band VR is trying to maintain. I understand why Harmonix and Oculus wouldn’t want players and especially long-time Rock Band fans to have to buy yet another Stratocaster controller, this time designed specifically for Rock Band VR, with a proper adapter that can hold the Touch controller in place.

It’s easy to imagine the VR fan that has spent thousands of dollars on a PC that can run VR smoothly and on the gear itself willing to spend a little more money to get a Stratocaster designed specifically for Rock Band VR in order to make sure they can lose themselves entirely in the illusion, with no concern about their game peripherals.

You’re a cover band, not a rock band

The downside of playing chords instead of notes is that this makes perfect replication of songs all but impossible. In the traditional Rock Band games perfect performance means perfect replication either of the original song or a cover version produced by Harmonix. In Rock Band VR you’re making up chords that don’t exist in the original track. Even a perfect performance in Rock Band VR doesn’t sound right if you know the song well.

If you play the Rock Band games because you enjoy feeling as if you’re actually the rock stars you’re mimicking, your relationship to Rock Band VR might be the inverse of your relationship with the traditional games. I had much more fun playing songs that I didn’t know, because if the chord patterns were dissonant with the song it didn’t bother me so much. When I knew a song, the experience was less satisfying.

The beta version of Rock Band VR eleased on March 23. Harmonix provided GamesBeat with a digital copy of the game and an Oculus Touch-compatible Stratocaster controller for the purpose of this review.