Rocket League was the setting for a civil war of sorts last weekend. Players from NRG met across the digital car-soccer field as DapG took on SizzleUrCob to see who represent North America against the predominantly European teams in the Universal Open Rocket League Grand Finals in Santa Ana, California.

Throughout the two-day event, the energy remained high and surprises kept coming. Cloud9, a big-name team who’s excelled in other esports like League of Legends and Heroes of the Storm, was knocked out by the end of the first day. The tournament was an opportunity for developer Psyonix, who partnered with NBC Sports and esports platform FaceIt, to put on a show and expose new fans to the game. And it seemed to work: A lot of children attended with their parents, a testament to the idea that Rocket League has legs for a wider audience beyond hardcore esports fans.

In the NRG civil war, SizzleUrCob prevailed but was shut down in the semifinals. But the finale was still exciting: the last two teams standing, Gale Force Esports and Method, were underdogs. Many of the fans thought that Method’s chances coming up the brackets were slim, but it held its own in its first U.S. competition. Gale Force ultimately triumphed after hovering in second place for its last three major tournaments.

About 100 folks showed up to cheer on the competitors, and the Twitch stream reached over 55,000 viewers during certain matches, like the finale. Rob Simmelkjaer, senior vice president of NBC Sports Ventures, says that the event has exceeded expectations.

“Engagement was our No. 1 objective when we launched this year,” said Simmelkjaer in an interview with GamesBeat. “We wanted to engage as many esports fans as we can. We wanted the esports community to think that this was a top notch, high quality event, and the athletes and teams as well, to walk away feeling good about it. So far all those things have happened.”

NBC livestreamed the competition this weekend over its app and on Twitch, and it also broadcast it in the U.S., the U.K., Germany, Australia, and in Latin America. The partnership with Psyonix marks NBC’s first venture into esports, and Simmelkjaer says that it’s because of how easy it is for a general audience to understand.

“We think it’s a really good first game for us, because it’s very accessible. It’s understandable if you’re not a hardcore gamer or esports fan,” said Simmelkjaer. “It’s got some sports DNA to it. It works, hopefully, for our existing sports audience to some degree. We’ve been really happy with the results of the event.”

When Rocket League debuted in the summer of 2015, it instantly became a huge hit. Up to four players control rocket-powered cars on two opposing teams, jostling and jumping to score against each other by knocking a giant soccer ball into goals. Each snack-sized round is five minutes, though if the match ends on a tie, then it goes into overtime. Now more than 33 million people play Rocket League across PC, Xbox One, and PlayStation 4, and soon it will be coming to the Nintendo Switch and expanding to China with the help of Tencent.

An esport with wide appeal

Fans and players echoed Simmelkjaer’s sentiment about the game’s accessibility. Two fans, Marisel Griswold and James Barzar, said that they don’t follow any other esports except Rocket League. Barzar’s friend convinced him to download the game, and once he gave it a try, he was hooked.

“For the most part, as far as esports, this is the only thing we’ve ever started getting into the most,” said Barzar. “I don’t think we’ve ever watched anything else, other than this.”

Griswold noted, though, that this could change for her in the future.

“But definitely, after this one being the first one, I’m definitely going to try to start getting into other ones as well,” said Griswold. “I’ve dabbled with Overwatch a bit, but I’m not as hardcore with it as I am with Rocket League.” 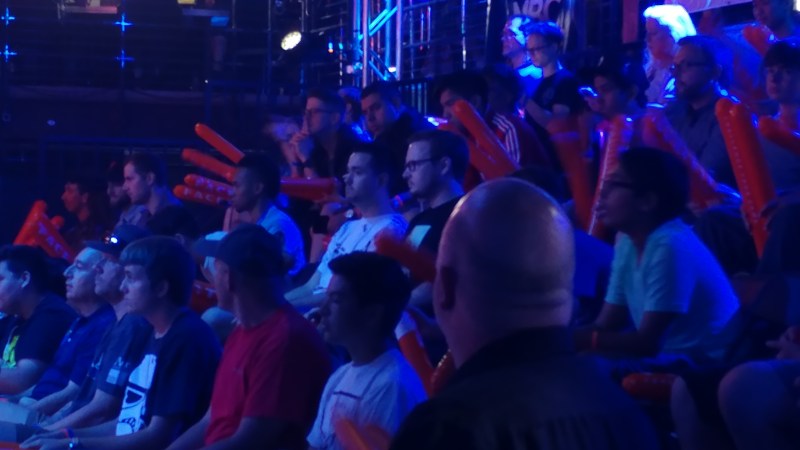 Professional Rocket League competitor Jaime “Karma” Bickford says that, for the first time, her family understands and is interested in what she does.

“I stream as my job, other than playing Rocket League,” said Bickford. “I spend a good deal of time on the computer talking to myself. They kind of understood that, but now that they see it on TV and see the fans and the crowd, the production that goes into it, the audience—it’s like a real sport.”

Bickford started out playing Call of Duty 10 years ago and then moved on to Hearthstone. She’s now signed with the pro team Splyce and she will be competing in the Rocket League Championship Series 4 this year.

Semifinalists Jacob “Jacob” McDowell and Emiliano “Sizz” Benny, who together form SizzleUrCob, agree with the assessment. Benny says that it’s easy for folks to get into Rocket League because it’s “just soccer with this aerial mechanic.” However, it’s appealing for pro players because the simplicity belies a lot of complexity.

“The ceiling is so high in this game,” said Benny. “Eventually there will be a point where everyone is really good and you’ll have to focus on new mechanics. People will discover new mechanics. But right now we just keep climbing in skill level.”

“I feel like even a lot of the pros just got in because it’s such an easy game to understand,” said McDowell. “They’re like, damn, this game is really fun. And then it just escalated from there, how much they were playing.”

Starting with the fans

For the last year and a half, Psyonix has been hosting official Rocket League competitions, tapping into the esports market which is predicted to triple to $1.5 billion by 2020. Its evolution as an esports, according to Psyonix’s esports operations manager Josh Watson, emerged from the fan community.

“We have the luxury of having an incredibly passionate community that started to form at the grass roots and lay the foundation for what our esports would eventually become,” said Watson. “One thing that was important to us is to make sure that when we’re coming into this space, we’re not trampling anything they’ve created. We’re creating something that feels organic with what they’ve started.”

Watson says that they’re focused on the spectator experience. Psyonix has added features like the esports “Live Now” button on the main menu, which alerts players to livestreams of official matches. It also has a fan rewards system where fans can link their Twitch and Rocket League accounts to earn in-game items when they watch streams. 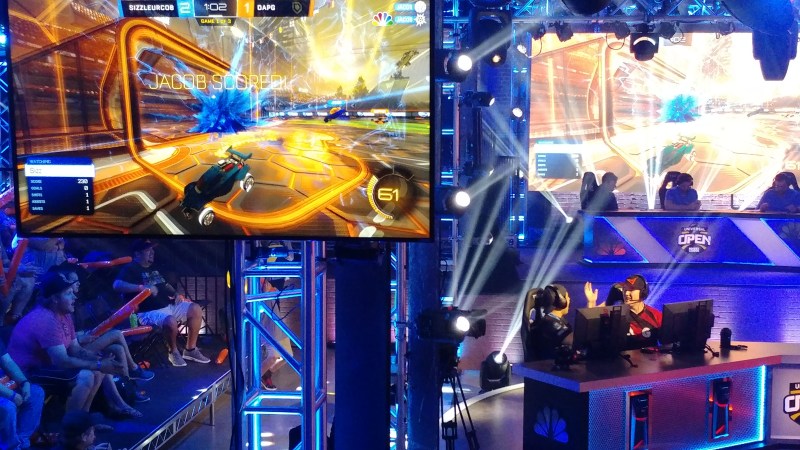 Michele Attisani, FaceIt’s cofounder and chief business officer, said that his company also started from the community when deciding how to host Rocket League tournaments on their platform. FaceIt’s platform runs everything from competitive shooters like CS:GO to multiplayer online battle arenas like League of Legends. When working out the details of the Universal Open Rocket League tournament, Attisani says that they went with 2-v-2 and hosted open qualifiers so anyone could get a chance to compete.

“This [Rocket League] tournament is obviously based on 2v2, which is not the officially recognized esports mode, but it’s effectively the most played mode in the community,” said Attisani. “Therefore, we see a really unique opportunity to build something starting from the grass roots, taking the approach of having open qualifiers. Everyone has a chance to participate.”

It sounds like the community is happy with the way that competitive Rocket League is going, but will it break into the mainstream and catch on with a broader audience?

“It’s definitely going to break in within the next two years or so,” said Bickford. “It’ll establish itself. Psyonix does a really good job with how they implement everything. They do a great job of listening to the community, which in my previous experience with organizations, they haven’t done that very well. The community, the people within the community, are really supportive. We’re all working toward the same goal. We all want to see it succeed.”