Expanding its reach into social casino games, RockYou has acquired two solitaire apps from MavenHut for an undisclosed price. The acquisition of Solitaire Arena and Solitaire 3 Arena is part of RockYou’s ongoing bid to profitably operate games that other companies have decided to unload.

RockYou is finding ways to operate games that others have left for dead, and that is turning into an interesting path for survival in the cutthroat social and mobile games business. With this strategy of operating older games more profitably than others can do so, RockYou has become one of the most active acquirers of gaming content. 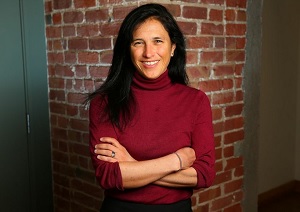 Above: Lisa Marino of RockYou.

Lisa Marino, chief executive of San Francisco-based RockYou, said in an interview with GamesBeat that the deal expands her company’s reach into social casino offerings and expands RockYou’s daily active users by more than 2 million players. Marino said these will live on and continue to engage people for years to come. Worldwide, RockYou reaches more than 80 million consumers on mobile, Facebook, and the Web. It monetizes those users through ads.

“This doubles our daily active reach in the U.S.,” Marino said. “We are excited about what we can do. We love casual casino games and this fits squarely in that space.”

In both games, people can challenge others in multiplayer solitaire matches. While that sounds strange, a big community has grown up around social solitaire. The games were attractive because they had English-speaking players, high retention rates, and low requirements for additional content production. Since the games are social, the community around them generates the ongoing interest in the experiences. While the solitaire games are not the same games you would find in an actual casino, they do offer a casino-like flair and competitive fun for the players.

Both are available on iOS, Android, and Facebook, and they will help RockYou amass an even greater audience for its advertising platform. RockYou can profitably operate older games with smaller staffs while showing ads to the loyal user bases. The company started with a big audience on Facebook’s desktop version, but it has been expanding into mobile devices.

Marino said that MavenHut’s owners decided to move on.

“It’s time for them to monetize and move on,” Marino said.

“It was a very hot category, but only a couple of them really worked well,” Marino said. “The smaller companies can’t afford to spend on user acquisition. We’ve been one of the consolidators in this market.”

MavenHut is an Irish gaming company with development studios in Bucharest, Romania. It first launched Solitaire Arena on Facebook in November 2012.

“We love our Solitaire Arena players and the success these games have had in such a short time,” said MavenHut CEO Bobby Voicu, in a statement. “We knew that our Solitaire community will be greatly cared for as we transition our focus on developing new titles. We want these classics to live on, and RockYou is enabling us to do just that.”

RockYou has more than 300 employees.