Belgium game studio Abrakam is taking is looking to Kickstarter to raise funds for its next game, a roguelike digital card game called Roguebook.

Abrakam has experience in the digital card game world, having released Faeria in 2017. That title combines cards with strategy game elements. Roguebook will take place in the same fantasy setting as Faeria, but its gameplay will focus more on deck-building your way through computer-controlled enemies in a randomly generated world. It takes inspiration from Slay the Spire, another digital card game with roguelike elements.

“We were excited to try our own recipe and see how we could expand on it,” Abrakam COO and cofounder Jean-Michel Vilain told GamesBeat. “We’re doing a lot more than most of the existing roguelike deckbuilders you can see. You’re going to be able to move around a world map where you can explore, get chests, fight enemies. There will be a strong sense of exploration.”

The project is looking at a base Kickstarter goal of about $67,330 (€60,000). The game will come out for PC, PlayStation 4, Xbox One, and Switch, with a targeted Q2 2020 release. Next-gen console could also be a possibility depending on when they come out. 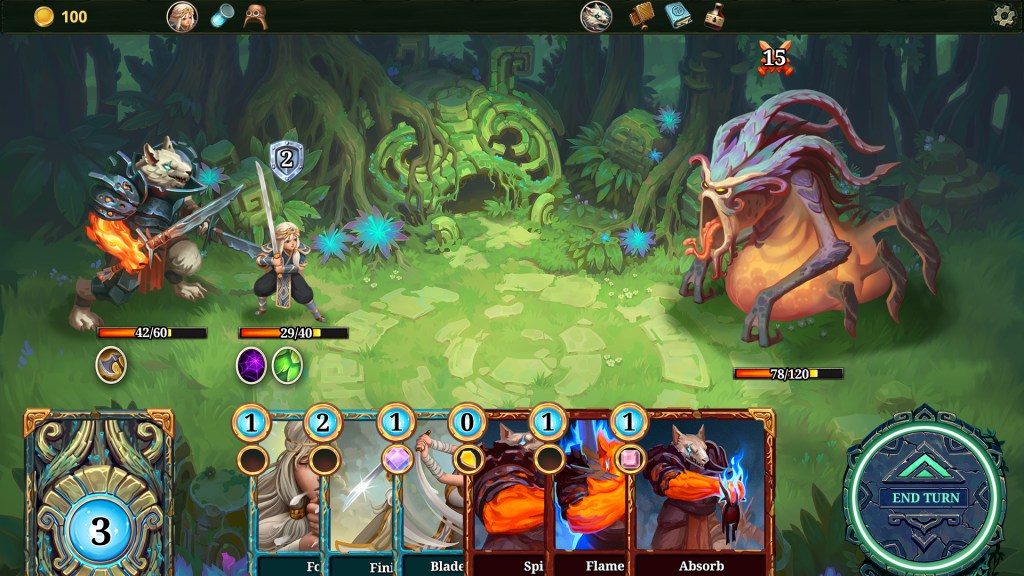 Your deck in Roguebook actually represents two different heroes. You’ll have cards in your deck that represent each of them.

While the king of digital cards games, Hearthstone, and many of its competitors focus on pitting players against each other, Roguebook will be about fighting AI-controlled monsters and enemies. Vilain thinks that this will be advantageous for the game.

“We’re happy to move away from the PvP side, because if you don’t have a very strong marketing — if you don’t reach a certain threshold, you’ll see your audience churn out,” Vilain said. “Fast or slow, it depends. Whenever there’s a winner in those games, there’s also a loser, and if you lose three times in a row you maybe start thinking this game isn’t for you.”