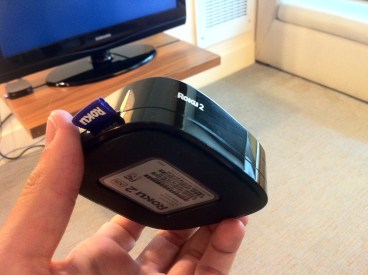 Roku, a company that produces boxes that stream web content to televisions, announced today that it is unveiling a new lineup of devices that feature games and motion controllers.

The company’s flagship title at launch is Angry Birds, a game that has already collected tens of millions of users. The controller is similar to the Wii MotionPlus controller from Nintendo. Instead of using infrared light to track a motion controller, it uses an internal set of components that track the controller’s orientation. That means the box will register a move to the left or right when you flick the controller.

The device is designed to power 3D graphics. I got to try out Angry Birds on the device (in the video below — I’m not that great at it) and the graphics felt a little sluggish. But given that it’s streaming 1080p video from a tiny box to a huge television, that might be par for the course. The device is powered by a system-on-a-chip architecture, so it doesn’t carry the same oomph that a PlayStation 3 or a Xbox 360 does.

The controller felt very responsive — on par with the Wii MotionPlus controller. It felt like what was happening on-screen was more or less one-to-one with whatever I was doing with the controller.

The company plans to aggressively add game content to the Roku 2 box. That includes the likes of Pac-Man: Championship Edition and other games from Namco, and more versions of Angry Birds. The company is mostly focusing on casual games that people can just “pick up and play.”

It’s a new step for a company that has traditionally focused on streaming videos and movies to the TV. Roku was spun out of Netflix three years ago and given the directive to create a box that could stream Netflix content directly to a television. But the company still intends to focus on Netflix as the device’s flagship app.

The devices are powered by traditional AA or AAA batteries, depending on the model you choose, or a power cable. They are about 3 inches across by 3 inches long, and about an inch deep. Each model has a bold embossing of its model name — the “XD,” “HD” or “XS.” The devices are connected to the Internet wirelessly, though the top-level device features a traditional broadband port.

Each box consumes around 5 watts of power. That’s compared to DVR devices — which are known to be electricity vampires — that consume around 30 watts and a PlayStation 3 that consumes around 130 watts at full speed. All three devices feature 256 megabytes of storage with a micro-SD card expansion slot for additional memory.

The company has sold around 1 million Roku boxes to date. You can check out a video of a hands-on experience with the device after the break.