Check out our Review Vault for past reviews

To the uninitiated, pinball looks as random as a slot machine and has as much storytelling potential as the local church’s bingo-ball tumbler.

And I completely understand having that impression, but it’s also wrong. Pinball is a much more narrative genre than many realize. With Atlus’s Rollers of the Realm for PC (also out now on PlayStation 4 and PlayStation Vita), developer Phantom Compass wants to show the world the abstract narrative of pinball by splicing it with gaming’s go-to storytelling vehicle: the role-playing game.

Possessing the creativity and drive to attempt putting two different genres together is great. The thing is, even the most well-intentioned cross-breeding experiments don’t always go as planned. 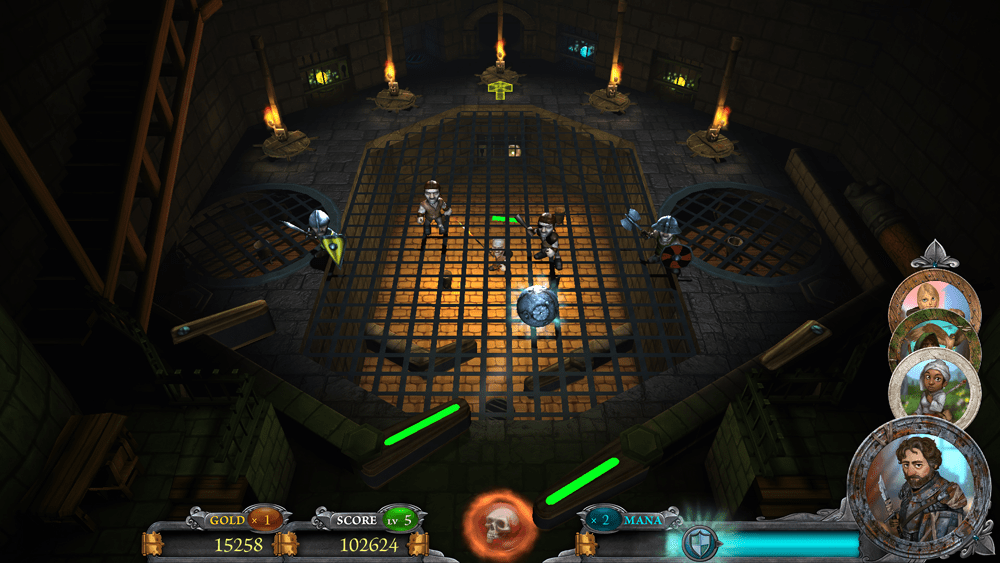 Above: So when building this prison for balls, maybe we shouldn’t have installed these giant flippers?

The next time I have difficulty explaining how pinball can be a physically abstract storytelling experience, I’m just going to point at Rollers of the Realm.

Each ball represents a character with their own attributes and personalities. The main protagonist, a young thief, is small and crafty. When her ball smacks into the backside of a villager, she picks their pockets for gold coins.

The knight is the largest ball in Rollers of the Realm. His rolls are heavy in nature and lack finesse. But since this sphere is good for smashing through targets that smaller balls can’t, it balances out.

These physical attributes aren’t about cold, calculated mechanics. They reflect each character’s personality through play design.

The thief ball’s physical play reflects her quick wit and capability of handling herself in the city streets. Yet the hero’s journey that is thrust onto her is too large to handle alone. She needs companionship from the growing number of spheres that join the party (also in the form of a loyal dog themed ball that is tied to some of her special abilities).

The knight’s physical heaviness and lumbering nature is also an analogy for his depression, set on by a sense of disillusionment for the world around him. If only he knew he wasn’t really a knight, but a ball in a pinball game.

These ball-design metaphors may be heavy-handed, but the medium still seems to be in its infancy when it comes to expression-by-design. I applaud Phantom Compass on this attempt. 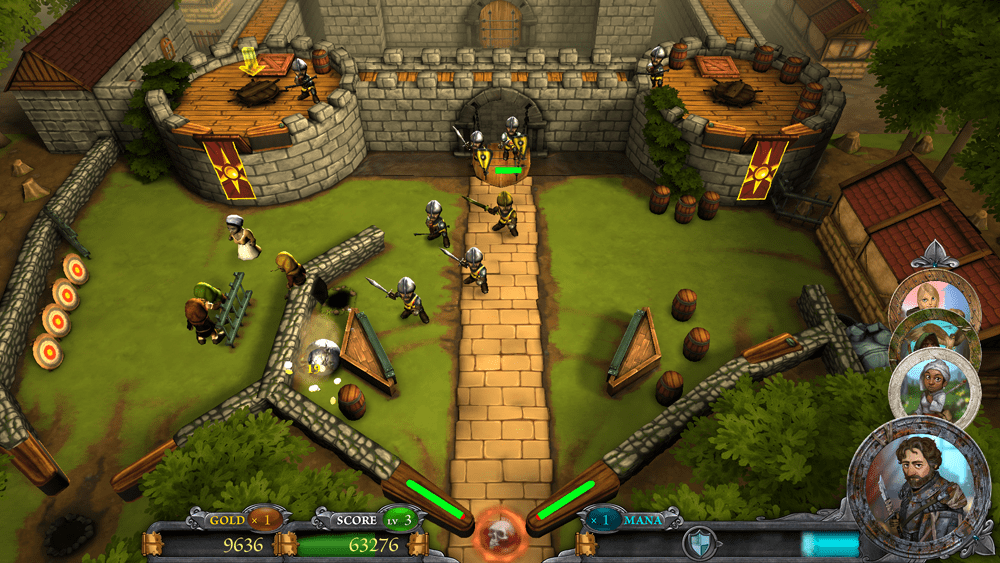 Above: They don’t like spheres wandering around their neighborhood.

Other little touches highlight pinball’s ability for narrative besides the personal life crisis of balls.

I especially like that the playfield represents a fantasy environment that happens to have pinball-like behavior, as opposed to bumpers and targets that have the cardboard facade of a village or castle.

For example, a well in the corner of a city square look like it would in any other game. It just so happens that a ball making contact with it evokes it to act like a pop bumper.

A shield carrying soldier standing in the middle of a road looks like he normally should. That is until you smack him with a sphere, making him act like a pinball target.

This is a small detail, but it really helps sell the narrative concept that this is a place, with people, and things are actually happening in this world. If they had taken the visuals to the other direction, of pinball contraptions wearing the thin mask of fantasy items, the immersion of the narrative in a pinball world wouldn’t have been as smooth. 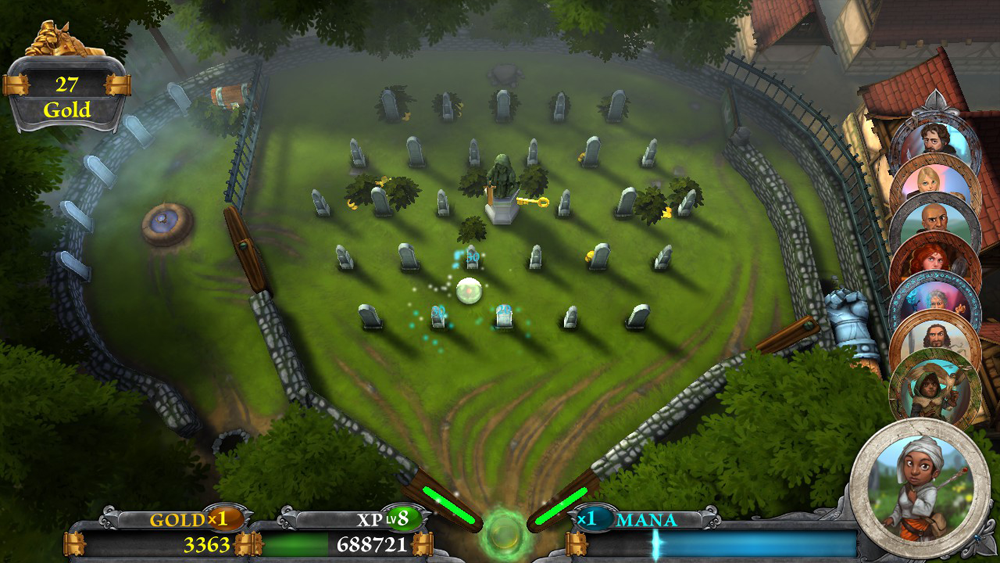 Above: The patron saint of rolling around.

From the mechanical standpoint of pinball, Phantom Compass is trying some cool ideas. Each ball has its own set of stats and equipment upgrades, which manipulate behavior. Such as how much damage it deals to a target, how quickly it rolls across the playfield, and how easily it can be controlled.

Each character also has a special set of powers, which you can activate separately from the flipper controls. These special powers offer some fun stuff like pumped up melee attacks, firing projectiles at enemies, and creating protection from drain holes.

Making every ball unique teases the possibility of strategic character combos for specific playfield situations. Phantom Compass is taking full advantage of video pinball’s ability to do things that are impossible for real-life machines to perform. 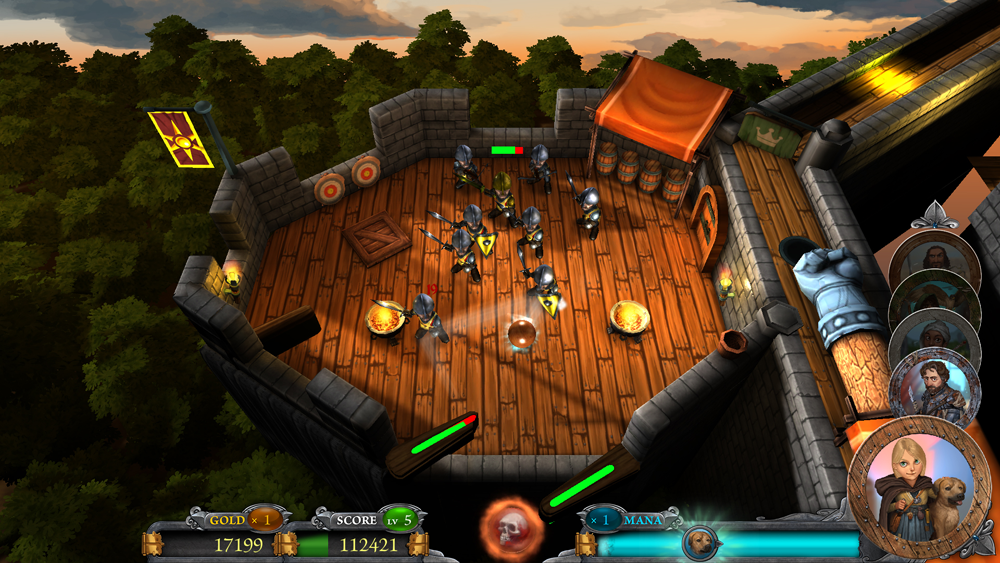 Above: Again. We built this tower in case of a ball attack. Who decided the giant flippers would be a good addition?

Phantom Compass also does a great job at making sure the majority of the real-world pinball skills made the transition to Rollers of the Realm. Post passing, which involves flipping a held ball off of a post in order to pass it to the opposite flipper, works in environments where slingshot-like items are available.

Drop catches also work. This is a technique where you drop a flipper just as the ball is going to make contact, killing its momentum so it can be cradled.

I won’t name off every ball control technique, but experienced pinball players will be able to do most of the staple moves.

I did say, “most.” Maneuvers that are rubber intensive in real-life pinball don’t work so well in Rollers of the Realm. The most obvious is the dead flipper pass. This skill requires not activating the flippers at all when the ball is screaming down towards them. This will make the ball bounce off of the flipper as if it were a rubber wall, killing some of the momentum and bouncing it over to the other flipper to be cradled. It’s a very common, basic control skill. 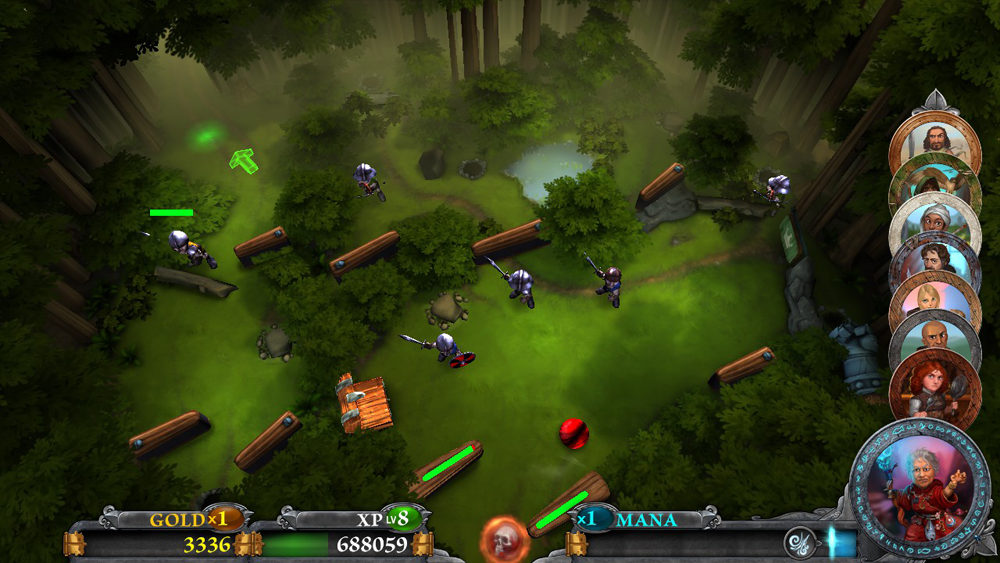 Above: The flippers grow wild here.

Since there is very little to no rubber-like physics in Rollers of the Realm, the ball will thud into the flipper and not bounce over. It’s not a negative, but it definitely affects how I would otherwise play out certain situations.

Nudging is also handled in a different manner. Instead of shoving the entire environment around, you can alter the trajectory of the ball directly. It has some interesting things you can do with this, such as control how a ball handles a bounce or adding an artificial curve to its trajectory. The latter comes in handy when you want to sneak around an enemy soldier and stab them in the back.

Obviously, some of this is going to irk hardcore players, but none of this bothers me. These controls provide enough real-life technique that it does not divorce the pinball concept, and it gives Rollers of the Realm a unique play identity.