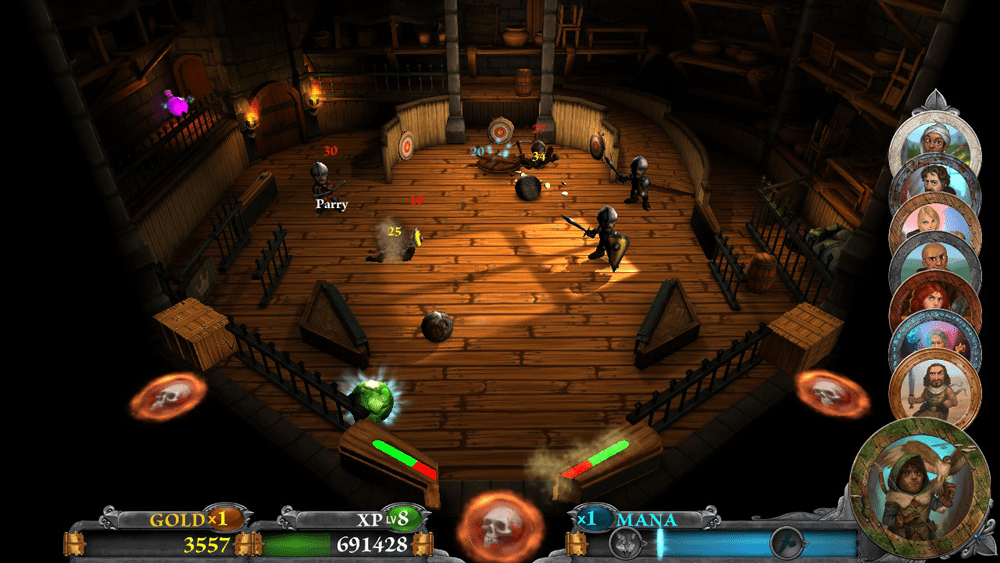 Above: You see, man, every time a ball walks into the bar, the whole place goes to hell.

The mana meter system in Rollers of the Realm needs some serious tweaking.

Traditional pinball scoring disappears here, replaced by two valuable pieces of currency: mana and gold. Mana resides in a bar on the U.I., with no additional levels. Once it’s full, you must spend it in order to take advantage of any additional mana you’re earning on the playfield.

That’s fine. But it has a big problem: I can spend the entire mana bar on reviving a dead ball.

These character balls may have some cool special abilities, but none of them trump generating an extra life. Situations where it was considered smart to spend mana on anything not geared toward revival were extremely rare.

Another big balancing issue that this plays into is in the character roster. Special moves, if I decide to spend the mana on them, are all over the board as far as their usefulness. If they are tied to multiball (which I will get to in a bit), forget it. Don’t even bother. While characters that fire off projectiles seemed to be automatic top-tier candidates for a lot of situations. 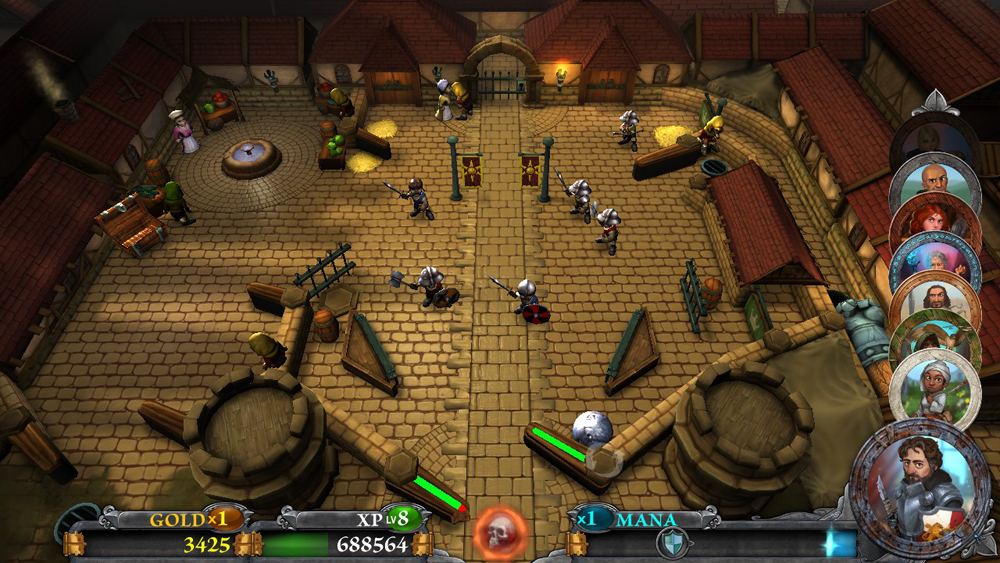 Above: If I get rolled over by a giant ball today on guard duty, tell my wife and kids that I love them.

It gets worse, unfortunately, because even if we put aside the poorly balanced special abilities, the entire roster would boil down to two balls just based off of their play style: the hunter and the healer.

The hunter, when maxed out, absolutely pin-cushions any enemy it happens to roll near. When so much of the playfield design is about killing things, it is always in my best interest to both keep this ball in play and to hold on to mana to revive it.

The other highly valuable ball, the healer, is brought in when the flippers have taken too much damage. As long as I flip her toward a mana-generating object, I’ll regain healthy flippers in no time. Then I simply swap to the hunter again.

Maybe a case can be made that I’m, “Playing the game wrong.”

The other balls need abilities that are as useful as the projectile and heal characters, with a mana system that isn’t relegated to revival only. Maybe tie revival to spending a large amount of gold or having to buy a special, expensive, item in the shop? That would at least free the system up so players will be tempted to use more of the special moves. 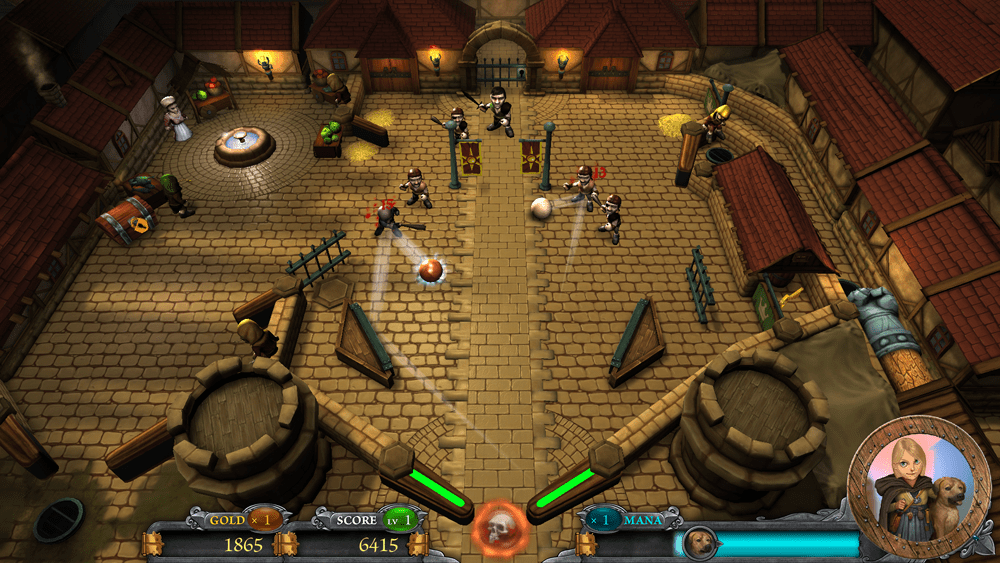 Above: Not McCloud! He was just two days from retirement!

The most useless of the character specific special moves in Rollers of the Realm are tied to pinball’s most beloved mode: multiball.

Multiball in traditional pinball is a time-honored risk-and-reward mechanic. A player’s ball control skills are taxed to their limit when they have to manage multiple spheres at one time. The misconception is that having a second or third ball in play is safer than one.

It absolutely is not. You are in constant danger of draining everything at once with multiple balls flying around.

The true payoff for all this ball juggling is in the huge scores that come with it. The rewards are typically associated with something like a huge jackpot shot being available or the scoring on the playfield being multiplied.

None of this is taken into consideration in Rollers of the Realm. Activating a character’s multiball ability makes the game more difficult with no benefits. The only bonus is that collecting mana, swiping gold, and damaging enemies can be done slightly quicker (since more balls are running into them at once). And you can earn all of this, anyway, if you play patiently with one ball.

Why risk losing a valuable character ball micromanaging additional worthless balls with nothing to gain?

Nothing to come back for 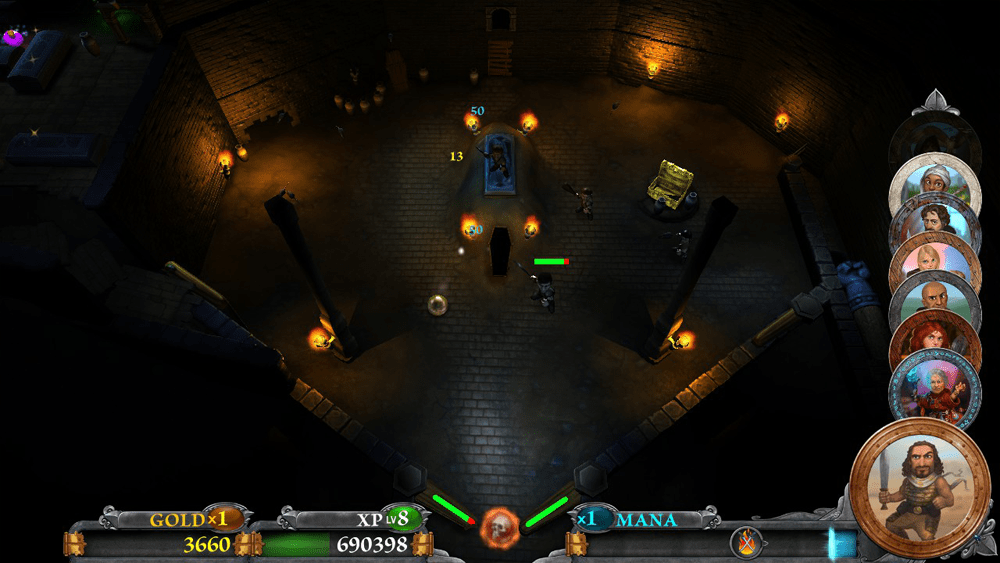 Above: Tomb of the unknown tilter.

The levels throughout the campaign are meticulously designed as small pinball chapter markers that lead us down a linear narrative. That’s also the root of Rollers of the Realm’s troubles.

Like every RPG, Rollers of the Realm encourages backtracking through these environments to grind away for experience points and gold. Without the narrative facade given in the original play through, these playfields wind up being embarrassingly shallow their second time around. The objectives are watered down to soldier-bashing and hitting a specific item a certain amount of times.

Great pinball design, both video and real life, is able to entice me back with so much more than what is provided here while not being overly complicated. I may have to bash an object over and over again in some real-life games, but it is always tied to something a bit more intriguing.

Grinding may be a trope of the RPG, but no one should put up with play becoming a boring chore. Good pinball, especially, should never feel tedious. It needs to be like a good puzzle game, one I may shelf for a while after the first few playthroughs but never actually quit — let alone dread.

Phantom Compass seems so tied up in getting the single player RPG elements to plug in, that in the shuffle it has missed what’s needed to make a compelling pinball experience.

Experimentation in a medium full of clones is laudable. If I could criticize based off of concepts alone, Phantom Compass’s bold idea would earn Rollers of the Realm a damned near perfect score. Unfortunately, in the real world you have to see those ideas through. And usually the bitch that tears good intentions apart is in the transition from drawing board to the real deal.

In Rollers of the Realm’s case, it’s most compelling as a one-and-done. If you have a difficult time grasping the concept of abstract narrative in pinball, it will be a fantastic eye-opener. Taken any further than that, expecting the replay of almost every other pinball option out there, and it disappoints.

Rollers of the Realm is available now on PlayStation 4, PC (Steam), and PlayStation Vita. The publisher provided GamesBeat with a Steam code.