Dell wants greener PCs (now if only their customers did too) — The computer maker says its laptops and desktops should consume 25 percent less energy by 2010. But the Wall Street Journal notes that Dell has an uphill battle in its effort to become the self-proclaimed “greenest IT company”, because many IT departments think environmentally-friendly computers are too expensive.

Atari releases exercise game system to compete with Nintendo’s — The new Wii Fit isn’t the only option for gamers who want to get in shape without leaving the comfort of their living rooms. Atari plans to release Family Trainer, a product for the Wii, this fall. It’s being billed as a simplified Wii Fit; players use an interactive floor mat for outdoor games like river rafting and log jumping.

Mozilla shares a few details about data collection project — As the company tries to expand beyond its Firefox web browser, one of its next projects is a service that could provide a fresh take on web analytics. Mozilla chief executive John Lilly writes that he project’s goal is to collect and share user data in a way that gives users control and protects their privacy, and to enable everyone to analyze and mash-up that data. That’s not a lot of information to go on, but it’ll be exciting to see what Mozilla comes up with.

Ask.com to buy Lexico — Apparently, the most popular query on search engine Ask.com is the word “dictionary”, so it kind of makes sense that IAC/Ask would purchase the Lexico Publishing Group, which owns Dictionary.com, Thesaurus.com and Reference.com. Ask says the deal will make it the ninth most visited property online, ahead of Facebook. Acquisition details haven’t been disclosed, but presumably the number is close to Answers.com’s $100 million offer for Lexico last year.
Google creates an encyclopedia for web developers — The site, called Doctype, will include articles on web security, best practices and more, as well as reference materials on HTML, DOM and CSS, and even some unused Google code that was developed for internal use. Taking a page from Wikipedia, Doctype can be edited by anyone with a Google account. 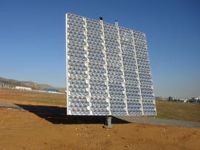 IBM develops technology to let solar cells stand the heat of more than 1,000 suns — That’s an important step, because cooling is a big concern with the photovoltaic cells used in solar panels. IBM’s stated performance is better than some companies like SolFocus and Greenvolts, but not as good as a recent upstart called Sunrgi.