Rumble Entertainment was ready to release its first game, KingsRoad, last year, but players didn’t like it. So the startup game studio, headed by former Elevation Partners partner Greg Richardson, went back to the drawing board. The company has learned that in the new age of mobile, you have to invest heavily to make a “console-quality” game.

Fans are getting more discerning, and gamemakers have to iterate on their titles until they get them right. And to get advice on that process and a longer runway, Richardson raised a new round of funding from Asian free-to-play online game giant Nexon.

Richardson, who spoke with us after a talk at the Casual Connect game conference in San Francisco, wants to build a game that will last forever — or at least far longer than a typical mobile game. Here’s a transcript of our interview.

GamesBeat: So what’s driving your hookup with Nexon?

Greg Richardson: For us it was the opportunity to partner with a company that was basically the godfather in the free-to-play space. They’ve been operating successfully for more than a decade, making microtransaction-based games similar to the ones we’re making – much more like ours than almost anybody in the west. Their ability to add value around immersive synchronous free-to-play games is unique. We felt like that was so valuable that, even though we weren’t actively pursuing an investment round, it made a lot of sense.

The second win for us is the fact that they’re so strong in Asia. It’s been difficult, historically, for western companies to do business in that part of the world. Even though we’re our own publisher in the west, the ability to potentially leverage them as a partner in places like Korea and Japan has a lot of promise.

GamesBeat: Is that an option, to use them as a publisher in Asia?

Richardson: We don’t have a commercial agreement that we’re announcing today around that, but I think there’s a strong potential for that to be the case. 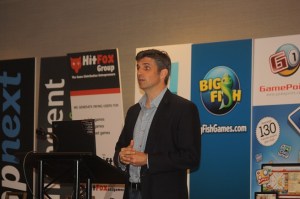 GamesBeat: You didn’t disclose your terms, but are you viewing the investment landscape in a certain way right now? Is it a good environment, a tough environment?

Richardson: I can talk about us in particular, and then I can give you my observation on the environment. We’ve been lucky. We’ve had great investors with Google and Khosla Ventures. We’ve been able to raise a lot of money at very favorable valuations, which you need to do the ambitious things we’re trying to do.

When we went out to raise money this time, we wanted more than just capital, which is why Nexon ended up being the perfect partner for us. We weren’t actively talking to the traditional investors. That said, a lot of the third parties we talked to – in a publisher role – are talking to those. What we’re hearing is that there is no money to be found.

It’s an interesting time. The fundamental growth of the game business, according to all the health metrics – the number of people buying tablets and using smartphones, the people engaged and playing on Facebook – are all growing past all-time highs. You can’t find a fundamental data point that doesn’t show you the game business is going to the moon. Arguably it’s the fastest-growing and highest head room business in the world right now. Maybe the data guys could give us a run for the money. But there doesn’t seem to be a lot of venture capital being invested.

I think two things explain that. One is that the only real public company in the west is Zynga. Whether they have anything to do with making triple-A quality immersive games — which they don’t, they’re in a totally different business with a different audience – is lost on most investors. Second, traditionally venture guys have shied away from any kind of content-led businesses. They appreciated the early days of free-to-play, where it was about user acquisition, leverage of an ecosystem, terms of service for free virality, data analytics, and aggressive monetization. They understand all those things, because they all apply to a lot of other businesses outside of games. But when it comes down to, “Hey, I have a great entertainment experience for people,” they don’t trust themselves. The vast majority of them have backed up.

You do see a few examples, like Mitch Lasky at Benchmark or Rick Thompson, who was one of my co-founders. They’re still out there looking for great deals. But they’re in the minority. It’s going to create an opportunity for some of the larger Asian guys – Nexon, Tencent, others. If they wanted to take advantage of it, the EAs and Activisions of the world could put capital to work in a way that could be very strategically meaningful to them. 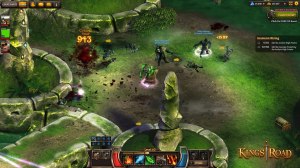 GamesBeat: Is this something that some [initial public offerings] in the game business could help with?

Richardson: What we really need is, whoever is going public next should be a consistent, stable business that’s built on a backbone of delivering high quality games. They shouldn’t be a single-hit-driven company or the most aggressive guys at a particular moment. That won’t help us. If more of those companies try to go public and then their hit game is gone, or the dynamics that made them successful is no longer relevant, and they don’t sustain, we’ll continue to have this problem.

GamesBeat: One of your games is a shooter. In free-to-play mobile games, is it hard to monetize a shooter?

Richardson: If you look at KingsRoad, the action-RPG we have, there are a lot of similarities to Dungeon Fighter Online, which has been one of their most successful franchises. And in the shooter category, whether it’s Counter-Strike or Combat Arms or a couple of others, [Nexon] had a ton of experience with the kind of games we’re making. That made us feel further validated by the fact that [Nexon] wanted to put money into us. They saw and played our games and said, “These are winners.”

Specific to your question, we think there’s a lot of value there. With a first-person shooter, it’s a skill-based game, and it’s PvP-based. A lot of the techniques you see in free-to-play games that are more PvE-based, or in games where you don’t mind if a player can pay to win, don’t apply at all. The experience they have – mostly around what not to do – is going to be important to us.

That’s not to say that they haven’t had a lot of success, because they have. It’s that the scar tissue of things we might try, that they have tried, is invaluable. It shortens that iteration cycle. Not everything we’ve done, whether it’s in KingsRoad or Ballistic, has worked. You like to feel as if the signal to noise ratio on the things you try is high.