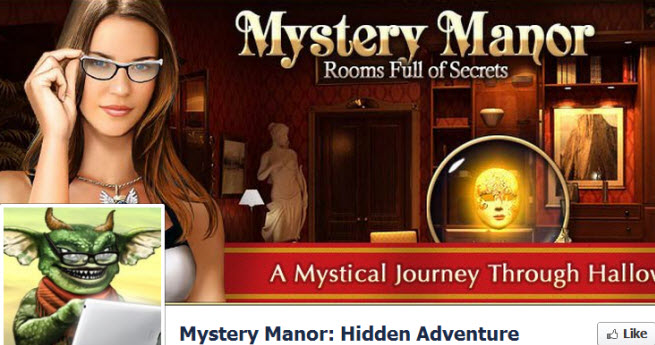 A revolt is rocking Mystery Manor. Due to a misunderstanding about Apple’s restrictions on promotions, Moscow-based Game Insight is dealing with a fan outcry after it had to take back some perks offered to users of the iPad version of the game.

Mystery Manor: Hidden Adventure, and the Facebook version of the game (Mystery Manor), have had more than 20 million registered users who are fans of the “hidden object” games. In this genre, first made popular on the web, a player searches for objects hidden within a scene and clicks on them once discovered. The genre was very popular on the web, but Game Insight made its title social, launching it on Facebook in 2011 as the first hidden-object game on the network. It took off, as gamers who were bored with simulated farms found something new to play.

Game Insight released an iPad version of the game, Mystery Manor: Hidden Adventure, in December, 2011. That version appears to be have a relatively small audience today, at about 10,000 monthly active users. The game was also popular on the iPhone, reaching into the top 100 most-downloaded ranks in 88 countries, according to market researcher App Annie.

[Updated description: But then the company recently changed the game so that players felt like they had to spend money in order to finish the game. They had to buy a virtual currency, diamonds, for $3.99 or more, in order to make reasonable progress in the game. The actual change was the elimination of friend promo codes, which allowed users to obtain and trade gifts with other players inside the game. That practice is common in many social games, but Apple banned the practice when it involved the transfer of items that were purchased for money. That change threw off the gameplay balance, as it was of the game’s core social elements. Players felt like this was a bait and switch. The company replied that it discovered that Apple restricted what its App Store developers are allowed to do in terms of offering promotions to users.]

Game Insight said on its fan page that it had to make changes to comply with Apple’s policies, canceling promotions where it gave gifts that normally require in-app purchases. Apple’s 1.11 guideline for developers says, “Apps that unlock or enable additional features or functionality with mechanisms other than the App Store will be rejected.” Game Insight is now removing all such functions from its iOS games.

Thousands of users complained on the game’s Facebook fan page, but the company deleted many of the messages. More messages have been posted on an unofficial fan page. Game Insight said it was deleting messages that were “inflammatory” or “abusive.” But now it has stopped doing so.

One fan who contacted us said, “I am not a rebel…FAR from it…. But I am passionate that we should be treated with respect and not be lied to…. The bottom line is we LOVE this game…. We want to play it…. But the cost for most, including me, is ridiculous…. And without buying their diamonds, there is not way to finish their quest…. Via triple their profit….”

Some of the players organized a “strike,” saying they would boycott the game. That started happening on Aug. 4 and it gained traction on message boards mmuff.com and proboards.com. Over the course of four days, the game’s rating dropped noticeably on the App Store. Usage stats also dropped.

Others are also venting about the purchases on the Facebook fan page.

Today, after we contacted Game Insight about the complaints, the company issued the following statement. Game Insight also said it is posting the message on its fan page:

“First of all, we’d like to thank everyone for reaching out and giving us their point of view on the issue. We value and appreciate your dedication, attention, and the investment you’ve made in Mystery Manor. Together, we have built something great. Between our communities on Facebook, independent fan pages and a plethora of forum posts, your support has made us what we are today. We fully understand your position and are working towards finding the best solution for everyone. You helped us build this Manor and all we can ask is that you stick by us as we work through this and find the answer we’re all looking for.

“Furthermore, we would like to formally apologize to all of our community members for any inconvenience and frustration they may have experienced related to this issue. Part of our work as a mobile developer and publisher requires us to occasionally update our games to ensure they are meet all new and existing standards of quality. Unfortunately, sometimes, very rarely, these updates can create unexpected issues, such as this one. As such, we would like to announce the following steps we will be taking:

-As you requested, we will continue to post any/all news regarding the issue on this page. With the sheer number of community members looking for answers, Skype calls and conference lines are simply too contained to properly inform everyone.
-As usual, we ask that everyone keep the level of discourse civil and courteous all sides of the discussion. We’re happy to hear from our fans, but as always, abusive and inflammatory posts will not be allowed to ensure we can have a productive discussion in an environment that is safe for everyone.

Game Insight will have more information and news on this matter as we dig deeper into the issue and we will bring those updates to you, directly, via this Facebook Fan Page.”

As a publisher, Game Insight is a young company, founded in 2010. But it has seen rapid growth with more than 50 million monthly active users as of this spring. The company has hundreds of developers, and it wants to hit revenues of more than $150 million in 2012. This incident isn’t necessarily a big wrinkle in those plans, but it is a test of how the company handles itself when it faces complaints from lots of passionate fans.